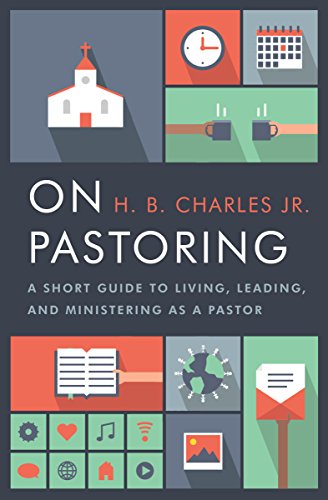 On Pastoring: A Short Guide to Living, Leading, and Ministering as a Pastor

Written by H. B. Charles Reviewed By Dwayne Milioni
Ethics and Pastoralia

The pastor must cultivate his own heart before he preaches to the heart of others. This is the cogent advice found in On Pastoring from H. B. Charles, pastor-teacher of Shiloh Metropolitan Baptist Church in Jacksonville. Charles has become a respected and sought after pastor and preacher, speaking nationally at conferences and conventions. This helpful book surveys pastoral wisdom gleaned from 25 years of experience since Charles began his first pastorate at age 17.

Charles hopes his book will be a compass for the pastor, pointing him toward a God-glorifying office and away from man-centered ministry. It contains 30 chapters, averaging five pages each and continues the format of Charles’s earlier work titled, On Preaching. These bite-sized chapters fall under three major sections: the pastor’s heart, the pastor’s leadership, and the pastor’s public ministry. Each chapter is self-contained and can be enjoyed independently. There are many heartwarming and humorous stories which read like a journey of Charles’s experiences from the struggles he faced as a naïve seventeen-year-old to the seasoned wisdom of a tenured shepherd—along with the scars and callouses to prove it.

The pastor serves for the glory of God and not to win the approval of man (p. 19). This thought sets the tone for Part One: The Pastor’s Heart. These brief chapters contain convincing advice garnered from Charles’ experience along with sage advice from well-known pastors past and present. Illuminating illustrations add clarity to the topic under discussion making each chapter enjoyable to read. Though not clearly defined, Charles believes the details of a pastor’s calling flows from Gods’ providence (p. 24). The man called of God should be more concerned about his godliness than his giftedness or reputation (p. 38). Citing Jesus from Matthew 25, a pastor’s faithfulness in ministry will be recognized and rewarded if he pursues the glory of God rather than the praise of men. He must also pursue his family with God’s unconditional love. The temptation toward celebrity success haunts every pastor and Charles shares his own personal struggle with desiring fame over faithfulness. Throughout the book, he lands poignant one-liners to grab the reader’s attention. For instance, the size and strength of your church are not synonymous, says Charles. The pastor “must remain faithful even when he isn’t being fruitful” (p. 48). He also says, “Be faithful where God has you rather than long for where he doesn’t want you” (p. 49). These are good reminders for ministers who may see “greener grass” on the other side of the ministerial fence.

It is encouraging that Charles advocates long-term pastorates because it takes time to nurture healthy congregations (p. 57). The small church pastor is encouraged to remain faithful. You do not have to be a prominent figure to be significant to your local congregation. Each ministry assignment is determined by divine providence rather than human opinion (p. 62).

The middle section of the book discusses pastoral leadership. There are common time intruders that steal away from pastoral productivity. The tyranny of the urgent can consume a pastor’s schedule. Quoting Spurgeon, the pastor must know what needs to be ignored (p. 74). A pastor must fight for personal time with the Lord. In time, he must raise up his replacement and have patience with young pastors who need to mature, like Peter with John Mark. For the visionary pastor, change seems slow, especially when revitalizing a church. The wise pastor will “make haste slowly” as James Montgomery Boice once said and Charles adds “the harvest doesn’t come in a hurry” (p. 90)

Charles admits to his immaturity as a young pastor who tried to assert himself into every church issue. The foolish leader tries to handle all of the churches problems. Fond of colloquialisms, Charles says, “A dog can whip a skunk any day, but it may not be worth the stink” (p. 96). Pastoral leadership demands proper planning. The preaching pastor should consider his preaching calendar and plan time away from the pulpit for his health and the well-being of his church. The pastor’s tool box begins with books. Rather than buying the latest on a subject, Charles advocates the purchase of the best ones. Good books are like good friends and good authors should always find themselves in the pastor’s library. The pastor should read widely and take sermon preparation seriously.

It is always perplexing for a pastor to know when it is time to leave his post for another position. Charles counsels that, in preparing for such a transition, prayer, godly counsel, and discernment are needed. Wherever a pastor finds himself serving, he should love the people God has given him and weather the storms that will come.

The final section concerns the pastor’s public ministry. The preacher is the worship leader and the proclamation of God’s Word should take the lead, while music should complement preaching and prayer so that doxology and theology are harmonious. Charles advocates faithful exposition of entire books of the Bible. This demands constant preparation as the race to Sunday comes with unrelenting regularity (p. 145). Still, sheep need to be well-fed and demand quality sermon preparation. Effective proclamation demands a prior spiritual devotion because “what is down in the well is what comes up in the bucket” (p. 145).

Charles admits it isn’t preaching that causes him anxiety as much as personal counseling. He gives practical advice in how to do this as well as advice on stewarding the onslaught of meetings that can fill a pastor’s calendar. The book concludes with heartfelt thoughts on devotional preaching and caring for the congregation. He even includes advice for the faithful church member, as well as a list of books on pastoral ministry that compliment his own, including Paul Tripp’s Dangerous Calling (Wheaton, IL: Crossway, 2012) and Derek Prime and Allistair Begg’s On Being a Pastor (Chicago: Moody, 2004). These more robust books on the nature of pastoral ministry balance Charles’s personal insights on his remarkable journey in being a pastor.