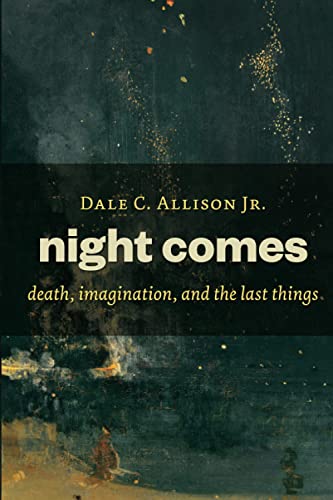 Night Comes defies neat categorization. It is part historical reflection, part theologizing, part autobiography, and part integration of science into his own field of biblical studies. Throughout, the book wrestles with the great existential questions that loom over our frightfully transient existence.

Dale Allison, an accomplished Gospels scholar, is Richard J. Dearborn Professor of New Testament at Princeton Seminary. As an ordained PCUSA minister he self-consciously writes out of the mainline Protestant tradition (pp. 46, 85). I can only assess the book from where I stand, in alignment with the TGC Confessional Statement, and thus situated somewhere between the fundamentalist Dispensationalism Allison considers silly and the mainline church to which he appears to be writing. I say he appears to be writing for fellow mainliners due to comments sprinkled throughout such as the observation that many pastors don’t preach on heaven because they don’t really believe it exists (p. 121), or in appealing to the mainline acceptance of angelic transmogrification (p. 132), or in the popular eschatological ignorance that is insufficiently engaged “in mainline pulpits and seminaries” (p. 85).

I will try to review this book with realism and charity. At the same time I can only review it honestly, believing that swallowing this book wholesale is intellectually confusing and spiritually dangerous.

The writing of even a short book like this one requires a mountain of effort and deserves due appreciation. It is not difficult to find praiseworthy elements in Night Comes. First is the pervasive theme reflected in the title. Death is coming, and it is coming to all, heedless of the infinite human resources distracting us from this unpleasant but unavoidable fact. “[I]f one thing seems assured, it’s that we have no power in the face of death. We may, with diet and exercise or whatnot, fend off the sickle for a bit, but the hour comes when none of us will work” (p. 42). The reminder is ever salutary.

Second is the way Allison writes, reflecting a literary craftsmanship honed over a lifetime of writing. Judgment upon death is “that resting place . . . when lame self-justification will halt” and we will finally be able to view ourselves “from a perspective that transcends and shatters our absurdly partisan self-perception” (pp. 62–63). Or: “If death is the end, then we’re all snow: we arrive, we melt, we are no more” (p. 88). Or: “Human beings aren’t unidirectional vectors but bundles of contradictions. Saints are sinners; sinners are saints. Everyone is Jekyll; everyone is Hyde” (p. 117). Well said.

Third, one appreciates Allison’s honesty and candor. He does not hide behind his scholarly reputation, afraid to voice his questions. His admirably transparent queries lend to the reader a certain openness to hearing him out.

Fourth, the breadth of reading informing the book astonishes. Allison meanders reflectively from the church fathers to the reformers, from Tolkien and Lewis to Pannenberg and Moltmann, from Hamlet to It’s a Wonderful Life, from the natural sciences to the fields of psychology and NDEs (near death experiences). At times the sheer number of quotes becomes cumbersome, but the range of reading is commendable of the author and deepening to the reader.

Finally, the actual content at times carries refreshing and eye-opening insight to the reader. One example is the discussion of judgment versus justice and the way contemporary culture views the former as negative and the latter as positive, and how this is out of accord with Scripture’s use of these terms (pp. 47–49). Another example is the way eschatology fuels ethics: what one believes about the next life necessarily informs how one lives this one (pp. 73–77). Yet another is Allison’s useful reminders throughout the book of the restraint needed regarding how much we can really know of the next life (e.g., p. 89). We should let the mysterious remain so. If that leaves us with some measure of discomfort, so be it. We shall be that much the humbler.

For these reasons and more the book holds one’s attention throughout, with occasional pockets of highly enjoyable reading. It is therefore saddening to acknowledge that Night Comes is a deeply unchristian book.

By this I do not mean that Allison rejects wholesale the Christian gospel. He holds various historic Christian convictions. But his approach to death and the afterlife fundamentally approaches his subject from below, not from above. Human learning, not divine revelation, forms the basis for Allison’s claims. This book walks by sight, not by faith.

One way we see this is the repeated inclusion in each chapter of affirmation of Allison’s points from other world religions. Hinduism, Buddhism, and even New Age thought (p. 128) are brought in as further vindication of Allison’s experientially-based thoughts on the afterlife. To be sure, we ought to expect to find strains of truth in other religions due to God’s common grace and the imago Dei, but Allison seems to put all religions on equal footing.

The main reason I call this book “unchristian,” however, is its unstated but pervasive bibliology. Toward the beginning of the book, for example, Allison asks why we fear death. “The obvious answer is: genetic programming. Our recoil is a biological reflex, bestowed by an evolutionary process that instills the instinct to survive” (p. 5). Why not reflect on the Bible’s teaching on death to answer this question? The next page answers: “the Bible is, despite the latest covers, old and distant, and it gets older and more distant with each passing day” (p. 6).

Throughout the book Allison bows to “the irrefragable results of modern science” (p. 33) in an undisguised privileging of post-Enlightenment thought that causes his admittedly broad historical reading to be unhelpfully selective toward his own case. Thus he argues that the traditional doctrine of bodily resurrection has been losing widespread assent the past few centuries (pp. 27–35), yet nowhere acknowledges the alternative and major swaths of Christian thought that have held strongly and clearly to the doctrine of a physical resurrection. One thinks of Robert Yarbrough’s The Salvation-Historical Fallacy? (Blandford Forum, UK: Deo, 2004), which demonstrates with ample evidence the continued belief in the traditional doctrine of the final resurrection during the heyday of Wrede, Harnack, and other vocal voices within German higher criticism. Liberalism wasn’t all there was. Indeed, students of post-Enlightenment biblical criticism will notice that Allison’s approach is precisely the difference highlighted when Schlatter joined Harnack at the University of Berlin in the 1890s. One scholar stood under the Bible, the other over it.

I am therefore at a loss as to any real usefulness for this book. The methodology is deficient, the history selective, the suggestions at times bizarre, the tone noncommittal, the arguments occasionally contradictory, the Bible eviscerated of authority, and the gospel confused.