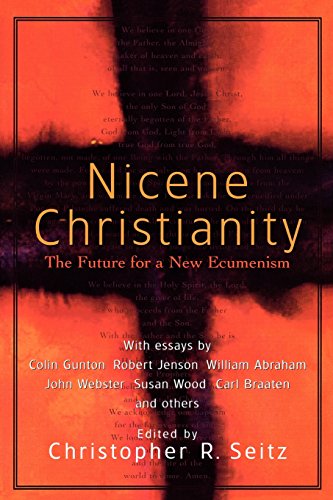 NICENE CHRISTIANITY: THE FUTURE FOR A NEW ECUMENISM

In a famous series of lectures given in his visit to the USA in 1962. Karl Barth put forward his positive vision of evangelical theology (later published in expanded form under the title Evangelical Theology: An Introduction). This is not the same as the evangelical theology with which most Themelios readers would be familiar (with its emphases on the infallibility of Scripture, the cross, conversion, etc.), but rather represents itself as the task whereby the Christian simply engages with and witnesses to the God who is revealed in the gospel, in Jesus Christ. This evangelical theology is one that sees itself in continuity with the NT, the creeds, and (in Barth’s case) the Protestant Reformation, but which is essentially an ecumenical, humble and modest enterprise. It is also not merely a subset of Protestant theology, since evangelical theology—on Barth’s definition—is as present in branches of Roman Catholicism and Eastern Orthodoxy as it is absent in certain strands of Protestantism.

It is much the same spirit that animates the present volume, an exposition of the Nicene Creed by many of the world’s leading dogmaticians. After an interesting first chapter by editor Seitz, on ‘Our help is in the name of the Lord, the maker of heaven and earth’, the need four chapters have a christological focus. In an excellent piece, Alan Torrance highlights the incoherence of Arianism in its consignment of God to distance from his creation; if Christ is not ‘of one substance with the Father’, then humanity’s encounter with the Son is not actually an encounter with God. Gunton, similarly, draws attention to the way in which only God has power to overcome sin and death, again showing up the inadequacy of Arian christology, a heresy which Gunton sees not as ancient history, but as a recurrent and still present problem.

Somewhat more disappointing is the essay by Robert Jenson on the ‘For us … He was made man’. Here, as in his recent two-volume systematic theology, Jenson opposes vigorously the traditional doctrine of the pre-existence of Christ. He somewhat breathtakingly presents his view as one which has continually through the course of Christian history jostled with a pre-existence christology (77). To this latter view, in which the eternal Son has always been in fellowship with the Father prior to the incarnation, Jenson responds:

But on this reading the Son’s identity as a man threatens to become unthinkable. This story of an eternal Son who at first is not man, and then later on is, imposes severe difficulties.

He appeals both to Scripture and to tradition in the course of his argument, but does not seem at all inhibited either by the biblical evidence against him, or by the almost unanimous witness of church history.

Other contribution come from David Yeago (‘Crucified also for us under Pontius Pilate’); Carl Braaten (‘The Reality of the Resurrection’); Thomas Smail (‘The Holy Spirit in the Holy Trinity’); Kathryn Greene-McCreight (‘He spoke through the prophets’); William Abraham (‘I believe in one holy catholic and apostolic church’); Susan Wood (‘One Baptism for the Forgiveness of Sins’); and Vigen Guroian (‘I look for the resurrection’). Ephraim Render provides a closing essay on our response to the Creed. Douglas Farrow (148) and John Webster (in a helpful essay on the nature and function of creeds) both highlight, crucially, that creeds must not be mumbled, but should be shouted from the rooftops. As Webster puts it: ‘To confess is to testify—and to testify with a bit of noise’ (122). If there is a tension in the general tenor of some (not all) of these essays, it lies at the same point of tension as in Barth’s Evangelical Theology. There is an intrinsic problem with an approach which on the one hand wants to be modest, avoiding the claim to having yielded better results than other theological approaches, but which at the same time sees itself as rooted in the Bible and the creeds. The Bible and the creeds alike are of course concerned with controversy and with competing claims to truthfulness. Philip Turner’s sideswipe, in his introduction to the present book, at the ‘dogmatic certainties’ of evangelicals is all very well, but proclaiming the Nicene Creed with the loudness which it demands should have the double function (let not man put them asunder) both of witness and worship, and of what the Pastoral Epistles call rebuking and correcting.