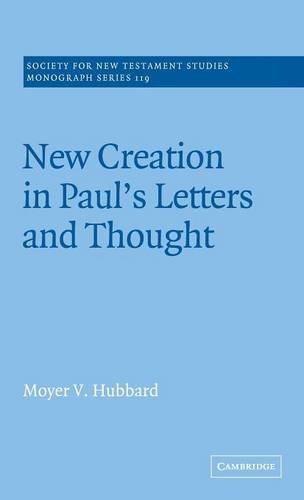 This 1998 Oxford doctoral thesis examines the motif of ‘new creation’ in 2 Corinthians 5:17 and Galatians 6:15 against the backdrop of Paul’s letters and his Jewish context.

Part one sets the stage by investigating ‘select Jewish material’ that may have influenced Paul’s concept of new creation. Hubbard begins by examining the motif of new creation in Isaiah, Jeremiah, and Ezekiel (ch. 2). He then turns to explore how the motif functions in Jubilees (ch. 3) and Joseph and Aseneth (ch. 4), two works which Hubbard thinks are the ‘strongest link in the proposed history-of-traditions chain’. He concludes that although there is ‘rich diversity of new-creation imagery in the literature of Second Temple Judaism’ there is one commonality: throughout all the writings,

Part two explores Paul’s new-creation statements in terms of their theological context in Paul’s writing. Hubbard starts with a discussion of rites of transition or initiation from a cultural anthropological perspective. An examination of the work of Arnold van Gennep and Victor Turner illustrates that ‘Paul’s soteriological imagery belongs to a larger matrix of religious symbolism’ (ch. 5). The author next turns to examine ‘Paul’s most elaborate life-through-death text, Romans 6:1–14 (ch. 6). He says the passage takes for granted ‘some of type of resurrection’, but Paul’s avoidance of resurrection language stems from the nature of his ethical argument. Hubbard proposes that the ‘old person’ of Romans 6:6 is the antithesis of ‘new creation’ at 2 Corinthians 5:17. This interpretation is preferable to a reading that harmonises Paul’s language in light of Ephesians or Colossians. Turning to Romans 7:1–6 (ch. 7) and Galatians 2:19–20 (ch. 9), Hubbard shows how Romans 7:4–6 and 2 Corinthians 5:14–17 mutually illuminate each other, something which he thinks has not been previously noted. He explains how Paul equates ‘life’ and ‘Spirit’ as synonyms. Importantly, this points in the direction of seeing Paul’s ‘new creation’ motif in the context of his Spirit-flesh dialectic. Antecedents of this link between ‘Spirit’ and ‘Life’ in Jewish writings are then explored (ch. 8).

Part three examines Paul’s new-creation statements at 2 Corinthians 5:17 (ch. 10) and Galatians 6:15 (ch. 11) in their epistolary and theological contexts. Building on his earlier foundation, Hubbard argues convincingly that Paul’s new-creation motif functions as an aspect of his pneumatology. He says that new creation ‘occupies a position typically reserved for [Pneuma]’. Hence ‘new creation’ can be understood as the antithesis of ‘flesh’. Although he wants to see ‘new creation’ as an anthropological motif, he resists seeing in Galatians 6:15 and 2 Corinthians 5:17 any sort of ‘ontological transformation’, which, in this reviewer’s opinion, would seem to be the conclusion of his anthropological-pneumatological line of argumentation. What we are dealing with, according to Hubbard, is ‘pneumatological restoration’.

Regrettably, some of Hubbard’s argumentation takes the form of ‘saying it makes it so’. For example, when discussing 1 Corinthians 15:22, he says that Paul’s language is ‘formed rhetorically rather than theologically’. But no reason is given. Nevertheless, this modest study is a welcome addition and corrective to Pauline studies in general and the study of Pauline anthropology a particular.