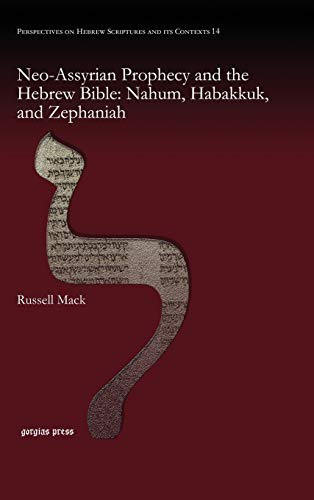 Neo-Assyrian Prophecy and the Hebrew Bible: Nahum, Habakkuk, and Zephaniah

The relationship between the message of Scripture and the varied historical contexts in which it was authored is complex. Interpreters, however, must make every effort to understand the linguistic, historical, and theological aspects of the text together. The volume under review here offers new insights on the historical and linguistic aspects of interpretation by examining the minor prophets Nahum, Habakkuk, and Zephaniah in relation to “prophetic” and related literature produced by the Neo-Assyrian empire in the seventh century. Because Judah was consistently under Assyrian hegemony from the middle of the eighth century onward, the two cultures were in close contact and the transmission of various elements of Assyrian belief and propaganda surely took place. In particular, there was a strong religious element in Assyrian statecraft so that the biblical prophets who interacted with Assyria typically did so on theological rather than nationalistic or xenophobic grounds.

The work, based on a dissertation submitted to Hebrew Union College-Jewish Institute of Religion (Cincinnati) in 2008, begins by briefly overviewing recent developments in the study of prophecy (ch. 1) and other fields relevant to the study (ch. 2) before laying out a multifaceted method that attends to social relations (semiotics), the relation between texts and the groups that produce them (structuralism), identifiable prophetic genres and departures from them (genre theory), the powers that authors have in writing (anthropology), the Marxist claim that “political reality shapes thought” rather than vice versa, the use of human imagination in history writing (new historicism), and the distinction between propagandistic and literary texts (reader response theory). For those who doubt the possibility or promise of interdisciplinary biblical studies, this work proves a tour de force.

Mack next takes up the primary texts, dealing with Neo-Assyrian prophecies of the seventh century (primarily to the Esarhaddon and Ashurbanipal; ch. 4) and contemporary supplemental materials (royal inscriptions and various communiques from the divine realm; ch. 5). All these texts, which represent several genres, fall into the category of propaganda, since in Neo-Assyria “monarchic patronage supports both prophets and the writers of the [royal inscriptions] and their work supports royal ideology” (p. 150; cf. also pp. 128, 132, 174).

The biblical materials that Mack studies differ in important ways from these Assyrian sources “due in large part to [their] being produced under a different social locus. [Nahum, Habakkuk, and Zephaniah] bear none of the characteristics of monarchic patronage” (p. 174). Because “an oral aesthetic permeates” the entire OT, Mack is not convinced that the oldest parts of prophetic books can be traced back to a pre-written, oral stage. As a result, he finds unconvincing the long-standing practice of dating the final written product by tracing its evolution through oral transmission to literary composition and successive redaction. He proposes instead that a prophetic book be dated primarily by comparing its genres with comparable genres from earlier and later periods; in other words, genre B is clearly derived from genre A, and B can arise no other way, so B must be later than A.

Nahum, for example, bears “the mark of creative literary activity that witnessed the creation and transformation of genres and adaptation of older forms to meet needs not previously experienced” (p. 176). Mack contends that “there is nothing in these books that directly relates to the seventh century,” departing from the majority of scholars who see at least the core of the book (less 1:2-8 and a few other sections) as the product of the seventh century (p. 180). He then argues that Nah 1:11-2:1 corresponds for the most part to the seventh century Assyrian texts surveyed in ch. 4, but that several variations (direct address to the recipient, modification of the divine self-identification formula, the use of Assyrian motifs like the breaking of a yoke, and the replacement of the Assyrian encouragement formula with the announcement of a messenger announcing good news) show that “[t]he author has appropriated and modified a standard prophetic form, the victory oracle, well attested in Assyria, to fit his purposes” (p. 198). While he admits, “it is impossible to trace the [genre adaptation's] trajectory with certainty” because victory oracles are attested before, during, and after the seventh century, Mack discounts the eighth century on the grounds that the two relevant texts in 1 Kgs 20 lack the encouragement formula. He also does not consider the Mari evidence from the early second millennium (no reason is stated), and inclines instead toward the possibility that Jehoiachin's scribes were “allowed to study Mesopotamian religious texts” once he was released from prison in Babylon (pp. 199-200).

Nahum 2:2-14 is dated similarly. Although the invasion report it includes has analogues in the Assyrian royal inscriptions to which Israel and Judah might have had some degree of access from the eighth century onward, Mack reasons, “genre adaptation typically occurs when changing historical/political realities require accompanying ideological changes” (pp. 208-9; cf. the tenet of Marxist literary criticism cited earlier that political reality shapes thought [p. 37]). Since the exile of Judah would have provided the “greatest impetus for re-examining the community's place in the historical process and YHWH's control over events,” he assigns a post-exilic date to this passage as well. Nahum 3:1-17 is tentatively dated to the fifth century (although “there is no reason to doubt that the taunt was known to pre-exilic Israel”) on the basis of Otto Kaiser's 1974 suggestion that the core of Isa 1-39 dates to the fifth century (p. 215); no appeal is made to genre adaptation in this case. Mack's treatments of Habakkuk (pp. 233-80) and Zephaniah (pp. 281-321) follow the general lines laid out here.

It seems to me that the priority of genre adaptation as a means of dating texts requires more substantial defense and development. To offer a specific critique, it is quite difficult to establish an absolute terminus a quo after which a (new) genre, never before attested, came into being exclusively through the modification of existing genres. Genre adaptation is also a slim basis on which to free the interpreter from concerns of historical referentiality and the striking Israelite claims that YHWH's commitments to Israel and David are perpetual and extend far into the future, a feature that Mack finds absent from the Assyrian material (pp. 131, 167). On this point, Mack's inference that the “historical context/deeds” of the prophetic figures tied to the twelve books of the minor prophets were unimportant to the people who produced those same books because they lack “significant references to prophets or their deeds” (p. 338, following P. R. Davies) seems to be a non sequitur argument.

Although only partially the author's responsibility, mention must be made of a number of typographical errors in Hebrew and English items (pp. 3, 12, 36, 49, 261n377, etc., including the Tetragrammaton, p. 219). A subject index would also help readers use the volume efficiently.

While Mack's use of genre adaption to date biblical texts will not convince every reader, his comparison and contrast of these three Hebrew prophetic books and Neo-Assyrian sources remains illuminating. Unlike the Assyrian texts, in Nahum “[Yahweh's] anger is not directed against the king's enemies. YHWH has displaced the king in this motif” (p. 219). Again, Nahum states that all God's people, and not simply the king, will benefit from divine protection (p. 220). Even more interesting is that “[w]hile the general content of the book supports the conclusion that the Assyrians are YHWH's primary enemy in . . . Nahum, they are never referred to in this way” (p. 224). Coupled with the conclusion that Nahum is not propaganda but a literary work “intended to help the community navigate crucial changes in ideology and their perception of reality” (p. 230), Mack contributes to an understanding of Nahum's worldview that integrates the book's rhetoric and the effects its author intended it to have on its readers and hearers. The same holds true for the chapters dealing with Zephaniah and Habakkuk.

Mack has undertaken a challenging project, particularly by drawing upon a wide variety of methods. While in some cases their cross-cultural and/or synchronic applicability can be questioned (e.g., Marxist literary criticism), the collective insights they afford cohere with one another and shed light on the message of the prophets treated. Despite the criticisms advanced above, the work's value is substantial, and one can hope that similarly integrative efforts will follow in its wake.