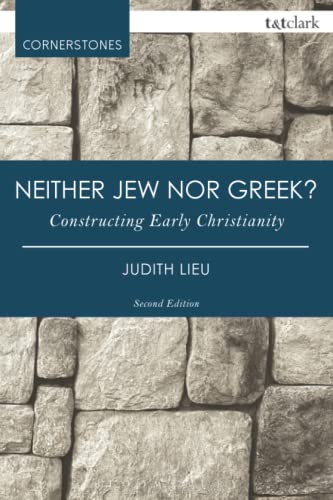 This book is a collection of Lieu’s articles and lectures over the last 12 years. As some of the work dates to the early 90s Lieu helpfully appends bibliographical notes to some of the essays in order to indicate any significant publications that have appeared in the interim. After an introductory chapter the remaining material is broken down into four sections.

In the first section, entitled ‘Disappearing Boundaries’, Lieu challenges the view that Christianity’s break from Judaism was a clear and easily perceived movement; the historical reality was considerably more diverse. She discusses the great variety of material that suggests that Christians and Jews were not always easily identifiable; assigning anything that does not fit the pattern of the parting of the ways as syncretism is not acceptable for Lieu (28). Going on to discuss ‘God-fearers’ and their attraction to Judaism or Christianity, Lieu argues that religious choices in the first century meant that there were those on the fringe of Judaism, Christianity or indeed other religious groups, who may have made their choice of affiliation for social rather than religious reasons. Although Judaism or Christianity ‘from within demanded sharp boundaries and exclusive commitment, that would never stop those who preferred to live on the boundary doing so’ (46).

The two essays in Part II focus on the place of women within the development of the early church and Judaism, specifically focusing on issues of conversion. Lieu asks, what would the difference be between a female god-fearer and a proselyte? How could you tell? Was it by marriage to a Jew, or simply by turning from idolatry? (107). She argues that those who present a feminist Jesus are wrong, and points out that we have no accounts of women’s conversion to early Christianity or Judaism (86). Christianity (and Judaism) did not so much offer women liberation, rather women, using independence that they already had, were able to create a place for themselves within the new religious movement.

The third section, ‘Theology and Scripture in Early Christian Views of Judaism’, deals with the boundaries that were drawn, by Christian and Jewish writers, between the groups. Lieu notes the polemic used by both groups to provide self-identification. In the works of writers such as Justin Martyr the Jews are presented as the murderers of Jesus, while the role of the Romans is suppressed, and similarly he portrays them as persecuting the Christian community. However, Lieu cautions that the rhetoric being employed by such writers needs to be understood by modern interpreters, both in trying to recreate the historical reality behind the texts, and in the role they played in shaping the ‘experience’ of the subsequent interpreters (150). Lieu offers a very insightful critique of the use of ‘Hebrew Scripture’ rather than ‘Old Testament’ pointing out:

Jews and Christians do not share these scriptures, for as Jewish or Christian scriptures they are essentially different; they cannot be reduced to ‘the common ground’ as sometimes claimed (155).

Finally, section four deals with ‘The Shaping of Early “Christian” Identity’. Here the term Christian is deliberately put in inverted commas; Lieu discusses potential anachronism in its use, noting that the Good News Bible and Today’s English Version use ‘Christian’ 59 times in comparison to the’ “more restrained” NRSV which uses the term only where the Greek form appears’ (193). She discusses the texts of the NT, their inclusion in the canon, and the variety of other Christian texts that existed. Further, she asks, was early Christian identity forged in opposition to the surrounding culture, Jewish or Graeco-Roman, or should we understand it as part of that culture and influenced by it?

This is a helpful collection of essays, but its detail and technical language will make engagement difficult for someone at undergraduate level. Individual essays will provide the reader with helpful critiques of scholarly perceptions of early Christianity or Judaism (although Lieu’s arguments also need criticism at times), but some background understanding is required for fuller interaction with the debate.