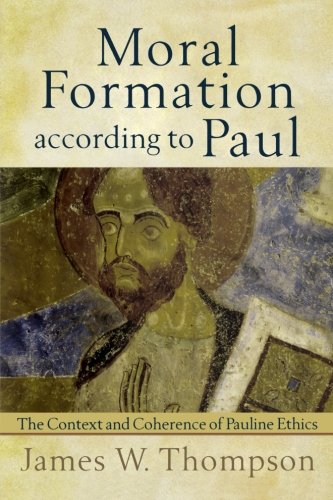 Moral Formation according to Paul: The Context and Coherence of Pauline Ethics

One debate that has famously shaped Pauline scholarship in the last generation is whether Paul's understanding of the law is either consistent or coherent. In this book, James W. Thompson asks a distinct but related question: Is Paul's vision of the moral life of Christians a coherent one? Having concluded in an earlier monograph that the goal of Paul's ministry was moral formation, and contending here that “moral instructions are the means toward the transformation of the community,” Thompson undertakes in this work to explore the contours and shape of those instructions (pp. ix, 3).

Thompson's introduction both helpfully maps the field of academic opinion concerning moral instruction in Paul and charts the course that this book will follow. The first chapter highlights dimensions of the ethics of Diaspora Jewish literature. These Jews “urge their readers to appropriate the identity of ancient Israel as the people set apart from their contemporaries and called to demonstrate their election by a shared standard of conduct” (p. 39). That shared standard is the Law of Moses. These Jews placed comparatively little emphasis on the ceremonial laws of Moses, stressing in their moral teaching the Holiness Code (Lev 17-26). They did not hesitate, Thompson argues, to draw from Hellenistic philosophical writings where those writings overlapped with the commands of Torah.

Subsequent chapters argue a strong affinity between Paul's ethics and those of Diaspora Jewish literature. The second chapter argues that across his correspondence Paul is concerned to cultivate an identity distinctive to the Christian church-one of “fictive kinship” as the family of God (p. 61). This identity, bolstered by a “new symbolic universe” consisting of a “shared narrative” and “rituals” that help to “sustain this narrative” (pp. 44-45), provides the foundation for the church's “corporate ethic” (p. 62). Chapters three through five explore Paul's ethics proper. Conceiving 1 Thessalonians as “catechesis for new converts” (p. 86), Thompson sees Paul's emphasis in this letter upon “sexual morality and community responsibility” as one shared with Diaspora Jewish writers. Paul's lists of virtue and vice, which Thompson helpfully tables (pp. 91-93), manifest Paul's debt “to the Holiness Code, the summaries of the law, and the Jewish paraenetic tradition” (p. 109). While Paul did not require that Gentile Christians keep the ceremonial commands of the Mosaic law, he did require that they keep its moral demands. He further believed, with other Diaspora Jews, that “all humanity is subject to the law's [moral] demands” (p. 133).

Chapters six and seven stress Paul's differences with his Jewish contemporaries. Paul expressed a profound and otherwise unparalleled “anthropological pessimism” of non-Christians to keep the law's demands. He held an “optimism” in Christians' “potential” to observe the law-an optimism rooted in the Spirit's enabling, not the law's enabling (pp. 155-56). Paul, furthermore, emphasized love to a degree unparalleled among his contemporaries. This emphasis is owing to the way in which, for Paul, “the new experience in Christ brings new dimensions to the concept.” Even so, Paul did not set law against love. Love, rather, “is the lens for observing [the law's commands]” (p. 180).

Before he draws his conclusions, Thompson devotes a final chapter to exploring whether the Disputed Letters reflect continuity or discontinuity with the Undisputed Letters with respect to ethics (p. 181). While he argues for an essential continuity among them, he contends that the Pastoral Epistles reflect certain ethical departures from the Undisputed Letters. Specifically, they abandon the “strong Pauline communal emphasis on 'one another'” and “equate . . . the Greek cardinal virtues . . . with Christian conduct” (p. 206).

Thompson's work has many commendable features. He successfully makes the case that Paul's ethic is a fundamentally coherent one. He further demonstrates continuity in Paul with the OT's summons to Israel to live in light of a distinctive identity grounded in their redemption by God. He also provides much exegetical support for what theologians have termed “the third use of the law” in Paul's ethical reflections.

Thompson's claims raise a couple of questions as well. To speak of the familial character of the family as “fictive,” of the Christian identity as rooted in “a new symbolic universe,” and of the sacraments as “reenact[ments of] aspects of the founding narrative and reinforce[ments of] the memory that shapes their place in the world and their identity” (p. 45) hardly does justice to the fundamentally realistic character of the historical events that, for Paul, underlie and define Christian identity. Further, Thompson overstates what he perceives to be the differences between the ethics of the Pastoral Epistles and the ethics of the Undisputed Epistles. When one takes into account the fact that each Pastoral focuses upon the ecclesiastical responsibilities of a younger ministerial associate, any absence of “one another” passages recedes in importance. When one furthermore recognizes, as Thompson does, that elements of the Greek cardinal virtues are present in the Undisputed Letters, any difference between the Undisputed Epistles and the Pastorals on this point is one of degree and not of kind.

In conclusion, Thompson has produced a helpful and engaging discussion of Pauline ethics. In its concern to set those ethics in their context, to demonstrate leading themes and commonalities within Paul's ethical instructions, and to stress the fundamental coherence of Paul's ethical reflection, Moral Formation According to Paul is a valuable resource for scholar and student alike.