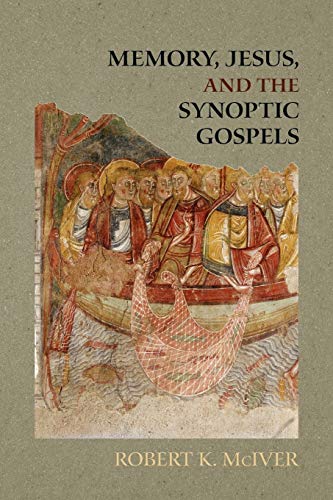 Memory, Jesus, and the Synoptic Gospels

Are we to follow Richard Bauckham’s model of the careful, eyewitness-based transmission of the Gospel tradition sketched out in hisJesus and the Eyewitnesses or the older form-critical model with almost no constraints as popularized in John Dominic Crossan’s The Birth of Christianity? McIver, Associate Professor of Biblical Studies at Avondale College of Higher Education in Cooranbong, Australia, argues that the best model lies somewhere in between, but his conclusions come much closer to Bauckham’s than they do to Crossan’s.

McIver ranges widely over numerous studies in the literature of modern psychology on personal and collective memory. Eyewitness testimony, even in a court of law, is often not more than 80% accurate, but the gist of episodes is usually recounted well. Errors creep in, usually unintentionally, in details of time and place, especially when other similar memories from other settings intrude and make sense even in the wrong context. Bias and the power of suggestion by others can cause some other mistakes. Accurate information about an event obtained later can, after time, seem like a memory of the event itself.

The greatest loss of memory occurs quickly after an event. What makes it from short-term into long-term storage, particularly after about five years, is likely to remain stable for decades. Crucial in preventing that early loss of detail are “flashbulb” experiences—particularly surprising, vivid, and/or personally influential events such as national tragedies, natural disasters, life-stage celebrations, and so on. Aged World War II veterans today, for example, still may have very detailed and accurate memories about certain battles in which they participated.

When individuals form part of groups that frequently recount formative events in their histories, collective memories are established. These can further enhance accurate recall, simply because those details that are selected to be narrated are heard over and over again. On the other hand, details can be modified unwittingly to prove relevant for the current setting in the life of the group in question. For the most part, however, collective memories are resistant to outright fabrication. The classic form-critical model, therefore, is seriously flawed. Much to be preferred is Kenneth Bailey’s informal, controlled oral-tradition model, especially as appropriated by James D. G. Dunn.

It is unlikely that people actually took notes of Jesus’s speeches as Alan Millard suggests because few in his audiences would have had access to “pen and paper” or anywhere to store and preserve them. On the other hand, the disciples’ pre-Easter ministries would have given them opportunity to be telling the stories of Jesus’s words and deeds almost immediately. And Jesus as a teacher would have ensured his followers had a large body of material committed to memory, as all Jewish and Greco-Roman teachers of the day insisted. A comparison of the paralleled pericope in Greek, especially of Jesus’s aphorisms and parables, shows a high degree of stability and reliability of transmission.

An appendix charts out first-century lifespans. Statistics about averages around forty years must recall that almost half of all children died by age five. So it is not as impossible as some critics have alleged to imagine eyewitnesses of the life of Christ living to the end of the first century, perhaps in their eighties. There just would have been far fewer than there would be today. According to one formula, only 671 people out of 100,000 would have lived to the age of eighty.

Overall, this volume contains a wealth of information that a brief review cannot begin to survey. From a purely historical and psychological point of view, without presupposing anything about the inspiration of the text, it gives readers of the Gospels reason to have a high level of confidence in their general reliability. The only factor that McIver doesn’t deal much with was that the apostles and their associates would have continued in post-Easter days retelling the stories that would eventually be written down so many times that their degree of accuracy might be far higher than in the modern studies surveyed here.

Studies of these kinds, however, will by their very nature never be able to argue for complete accuracy. Belief in inspiration will always remain a theological step of faith. But McIver has certainly shown that, even without that belief, a strong case can be made for the trustworthiness of the Gospels in their main contours and doubtless in many details, even if we can’t always be quite sure as to which ones. It is particularly encouraging to see the Society of Biblical Literature willing to publish a work of this nature, given their propensity for far more skeptical works.