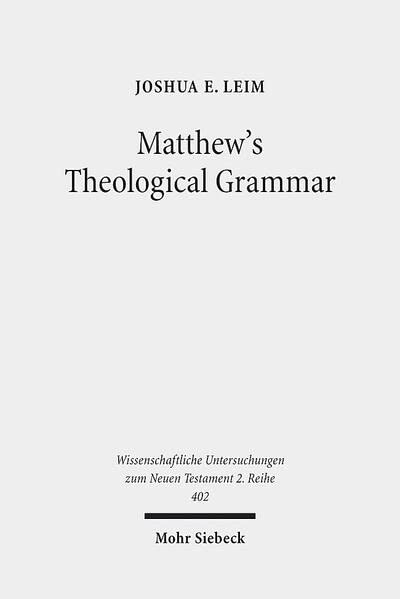 Matthew’s Theological Grammar: The Father and the Son

I like bold writing. I like an author who has a clear thesis and argues for it with direct language. If the thesis proves unconvincing, at least no one will doubt what the author meant because the writing was obscured by prose aimed to tow a middle line or to satisfy academic shibboleths. Leim’s narrative critical study of Matthew’s use of the verb προσκυνέω and his subsequent doctrine of θεός is just such a study. He provides “a reading of Matthew’s Gospel whose force turns on the cumulative literary effects of προσκυνέω and Jesus’ divine-filial identity” (p. 234). He concludes that προσκυνέω in Matthew means worship and its use “bind[s] together the identity of Father and Son” by taking up the verb “in ways that evoke Israel’s commitment to the one God while constantly and strategically applying it to Jesus” (p. 27). Translations and interpretations of προσκυνέω as homage or obeisance or honor gut the Gospel of its theological creativity and strip Jesus of his identity, the very point Matthew aims to expose.

Leim begins by arguing that προσκυνέω is a Leitwort and therefore essential for understanding Matthew’s Christology, which is absolutely necessary for understanding the gospel. But scholarly vagueness over what it means that “worship” of Jesus lends to an “exalted” or “heightened” Christology empties προσκυνέω of its power in individual passages and the narrative as a whole. “This means nothing less than that Jesus’ identity remains unclear, though, ironically, his identity is exactly what the Gospel is about” (p. 11). “Rather than attending closely to how προσκυνέω shapes and is shaped by the flow of the narrative,” Leim goes on, “its ‘meaning’ continues to be governed largely by concerns either external to the narrative or in rather clear contradiction to what the narrative says” (ibid.). “The result … is that Matthew’s Christology is rendered in abstraction from his own Gospel and ultimately expressed in theologically incoherent terms” (p. 13). To redress this, Leim employs a narrative critical approach where the verb’s “embeddedness in this particular symbolic world makes all the difference” (pp. 15–16, emphasis original). It must be understood, therefore, within “the whole of Matthew’s narrative” and “the early Christian way of life in which he participates” (p. 24). The meaning of words is not drawn merely from a list of options within an historically determined semantic domain (here Leim follows Wittgenstein), but the discourse in which the words are embedded shapes the meaning within that narrative world (as the intratexture is allowed to work interpretively forward and backwards over the narrative). In turn, such discourse-determined words have the power to shape an author and audience’s perceptions of reality because of the use of the term in such and such a way. Though, to be clear, the historical usage of terms bears as well; nothing happens in the abstract. The significance of προσκυνέω for Matthew, therefore, “emerges when one attends to its history of usage in scriptural and contemporary Jewish literature … while simultaneously setting it beside Matthew’s christologically momentous appropriation of it” (p. 27).

To make his case Leim considers the “cultural encyclopedia” to see how προσκυνέω was used in “the texts and contexts to which Matthew is most deeply indebted” (p. 31). The lion’s share of attention is given to OT books, especially Isaiah, the Psalms, the Pentateuch and Daniel, “since they are the larger frame into which Matthew fits his portrait of Jesus” (p. 32). After a brief but enlightening survey Leim summarizes that προσκυνέω is overwhelmingly used in the LXX to denote “worship” reserved exclusively for Israel’s God, and equally used to censure those who “worship” anything less (i.e. committing idolatry). In the noticeably few places where προσκυνέω is used of “obeisance” or “honor” of exalted figures, the language is qualified “to curtail the possible misinterpretation” (p. 42). When the word is not so nuanced, the burden of proof is on the translator who would render it as anything less than full “worship.” Leim’s coverage of προσκυνέω in Isaiah and Daniel (esp. in combination with πίπτω in the latter) proves particularly helpful in understanding Matthew’s usage. Similar uses, and qualifications in unique contexts (noting “theologically-charged situations”), are also found exceedingly in Second Temple literature, the NT and early Christian texts. Again, the burden of proof, according to Leim, falls to those who would render προσκυνέω as anything less than “worship” in Jewish and Christian literature without clear contextual reasons.

Chapters 3–6 then give careful attention to the Matthean narrative discourse, particularly periciopae that feature the verb προσκυνέω. The “worship” of Jesus by the Magi in 2:1–12 and the injunction that only the Lord God should receive “worship” in 4:8–10 together create an ungrammaticality, a word or concept that appears unintelligible in the narrative flow. Several factors—particularly intertexture and intratexture through chapters 1 and 2, as well as the combination of πίπτω and προσκυνέω in the cultural encyclopedia—suggest the Magi indeed offer Jesus the worship due exclusively to Israel’s one God. But how can this be if “worship” belongs only to God as explicitly stated in 4:10? “[O]ne does not actually know the answer until reading the whole story” (p. 53); only at that point is the ungrammaticality rendered intelligible by the full text. Thus 4:10 forces the reader to reconsider 2:1–12, creating the ungrammaticality that only further (retrospective) reading will resolve. Nonetheless, “in these opening sections of the narrative Matthew is already (re)shaping his readers’ theological imaginations around the life of the Son” (p. 79, emphasis original).

Of the subsequent eight uses of προσκυνέω, seven have Jesus as their object (8:2; 9:18; 14:33; 15:25; 20:20; 28:9, 17; 18:26 the exception), serving to re-activate and intensify the ungrammaticality each time. Increasingly, “Matthew has narrated these accounts in a way that remolds Israel’s worship christologically, and in so doing, binds together the human life of the Son with the identity of Israel’s κύριος” (p. 90). It is, then, 14:22–33—commonly recognized for “the numerous OT theophanic elements … that are directly appropriated in Jesus’ speech and actions” (p. 129)—that “opens a unique hermeneutical space” (p. 125) to decode the ungrammaticality, and to connect the beginning of the narrative where the ungrammaticality first appears to the end where the resolution is found, namely 28:9, 17. “Indeed, the swathe of intertexts in 14:22–33 … is so thick that one gets the impression that Matthew has narrated this scene almost entirely from the language of Exodus, Isaiah, and the Psalms, all interpenetrating one another, the chorus of which amplifies what Matthew is saying about Jesus” (p. 145). Thus, what is perceived in 2:1–12 and the truth of 4:10 get pushed together for mutual clarification and interpretation.

As the reader continues toward the narrative’s end, Matthew has “provided … the proper repertoire for interpreting 22:41–46” (p. 186) and an invoking of Israel’s Shema (23:8–10; cf. Deut 6:4 and Mal 2:10) to bind the identities of the Father and the Son together (which also encourages rereading passages like 1:21–25, 3:1–17, 11:1–12:8, and 18:19–20 though without the verb προσκυνέω). Across Matthew, therefore, the reader perceives “the sweeping and unified narrative christology that renders the identity of Jesus: the Christ, who is the unique Son of the Father, who as such is κύριος along with this Father, bring[ing] to fruition the eschatological salvation portended by the prophets as the return of the κύριος to his people” (p. 202).

In short, Matthew “binds together the identity of Father and Son through the language of προσκυνέω” (p. 107 et passim). To miss this, or to translate προσκυνέω as merely homage “is much too anemic an interpretation” (p. 106) and misses the very point of the entire gospel: to portray the identity of the Son and the Father (think 11:25–27). In so doing, “Matthew has reshaped the identity of—and therefore Israel’s fundamental confession of and commitment to—‘the Lord God’ around the Father and the Son” (p. 234). “But it is precisely the worship of the Son that is key for Matthew’s theological grammar, and it is with this filial language that Matthew skillfully navigates the double commitment to Israel’s basic confession of the one God and the full worship of Jesus” (p. 240–41).

There is little to demur from in Leim’s method, presentation of the evidence, rationale and conclusions. In fact, I think this is but another example of the fruits of the recent upsurge in narrative critical attentiveness to the Gospels. They are whole texts that cohere in their parts to present a consistent narratival universe. The more we attend to the connectivity of the parts across the whole, the more we see the complete picture the evangelists are giving us. When such studies are grounded in their original compositional contexts, the clearer still they become. It is the fact that Leim has attended so carefully to these things that make his argument very compelling.

Ironically, however, it is this very strength that makes one small critique seem big: I think 18:26 deserves more attention. There πίπτω and προσκυνέω are used together but not for Jesus or “God,” suggesting that something less than “worship” (perhaps “invocation”) can be understood for προσκυνέω within Matthew’s grammar. Leim’s rebuttal is that “the referential and symbolic nature of the parable” reveals that “the ‘King’ in the story manifestly represents God” (p. 65). I easily agree. But because Leim’s method depends so much on the consistency of these terms (with the ungrammaticality generated by their apparently disparate uses a tool for rhetorical effectiveness, not a hindrance) I suspect a lot of readers will want a more detailed explanation of 18:26 within the scope of Matthew and a more thorough refutation of the scholars who have used 18:26 against the sort of position Leim defends.

These are, of course, comparatively minor complaints. Leim’s work is, overall, sound and convincing. I hope Matthean scholars will wrestle with it thoroughly.