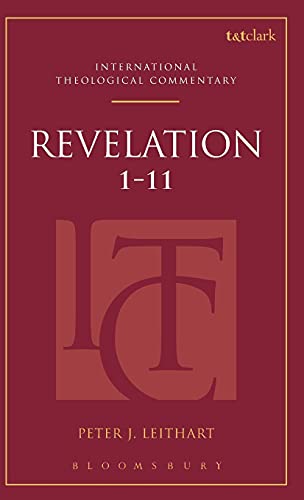 Peter Leithart is well known as an erudite biblical and theological scholar. His commentaries such as A Son to Me: An Exposition of 1 and 2 Samuel (Moscow, ID: Canon, 2003) and 1 and 2 Kings, Brazos Theological Commentary (Grand Rapids: Brazos, 2006) reveal his particular ability to write fresh, engaging theological commentaries that balance scholarly rigor with accessible application to the modern church. His two-volume commentary on Revelation is no different.

Leithart’s contribution to Revelation scholarship is unique in a few positive ways. First, it is arguably the most theological Revelation commentary on offer. One of the most influential publications from recent decades on the theology of Revelation is Richard Bauckham’s The Theology of the Book of Revelation (Cambridge: Cambridge University Press, 1993), however that volume is a brief overview of major theological themes rather than a verse-by-verse commentary on the text. Craig Keener also comes to mind (Revelation, NIV Application Commentary [Grand Rapids: Zondervan, 2000]), but his contribution is pitched at a more popular level. At a towering 1,000 pages, Leithart’s set obviously covers more theological ground, but his most unique theological contribution is his attention to Trinitarian themes, canonical contextualization, and theological ressourcement. Truly, no other Revelation commentary engages so well the storehouse of canonical, patristic, and medieval sources. Further, Leithart’s ability to read retrospectively as a Trinitarian brings fresh and valuable insights to reading Revelation as a modern Christian. In this way, Leithart richly delivers on the promise laid out by the series editors.

For example, one of the most disputed items in Revelation scholarship is the identity of the “seven spirits” (Rev 1:4; 3:1; 4:5; 5:6). For some, the seven spirits are merely angelic or otherwise spiritual beings. Others argue that the number seven represents perfection or completion, arguing that the seven spirits more likely refer to the sevenfold power or ministry of the Holy Spirit. In his commentary on Revelation 1:4, Leithart takes the latter position, but does so with an intensely Trinitarian emphasis. He spends several pages (vol. 1, pp. 84–90) on the “triadic” nature of this opening doxological formula, highlighting a few things:

Second, in the vein of G. K. Beale (The Book of Revelation, NIGTC [Grand Rapids: Eerdmans, 1999), Leithart also emphasizes the influence of the OT on Revelation. He asserts, “Revelation alludes to or echoes to virtually every book of the OT. It is the NT’s “OTest” book” (vol. 1, p. 4). While this is a given in Revelation scholarship, Leithart stays close to the OT text as he comments, not allowing his theological method and presuppositions overpower the plainest sense of the book—the OT shape of John’s vision. The danger of any theological commentary, especially one as explicitly stated as this contribution, is to exaggerate the systematic categories without giving proper due to the biblical and canonical storyline. Thankfully, Leithart largely avoids this trap. His treatment of the theological implications of the tree of life (Gen 2; Rev 2:7; 22:2–19) is a paramount example (vol. 2, pp. 425–31).

Third, the lack of an excessive focus on debates regarding the millennium in Rev 20 is refreshing. While this is an important theological conversation when dealing with Revelation, some discussions on the millennium would have you believe that Rev 20 is the entire focus of the book. Leithart still engages this debate with fairness and precision, ultimately taking a generally postmillennial position, but interprets the millennial mentions of Revelation against the horizon of first-century expectations and conditions, rather than using current news events as interpretive binoculars.

Our second commendation, however, leads to the most glaring flaw in Leithart’s work. This review is not demanding Leithart’s commentary become an historical-critical work, especially since that is clearly not its aim; however, the lack of sustained engagement with John’s cultural and literary “world,” particularly with reference to contemporary apocalyptic literature, at times undermines some of the theological depth. Systematic and biblical theologians can easily launch into theologizing from biblical texts without remembering that theology is not merely a retrospective culmination of OT and NT big picture ideas—it is also a product of its time, with its theology being formed by concepts, illustrations, and competing worldviews of its day. This is not to say that Revelation or any other biblical book is simply an amalgam of Jewish or Greco-Roman ideas; rather, it should not be ignored that Revelation is an example of a distinctly Christian rebuttal to the theological and political myths of its own time. Because he largely overlooks the apocalyptic background of the book, some of Leithart’s theological deductions end up shallow.

One brief example must suffice. In dealing with the “one like a Son of Man” passage (1:9–20), Leithart helpfully brings out many of the theological and linguistic aspects—namely the heavenly glory of Jesus, the chiastic structure of John’s description, and John’s allusion to the Danielic Son of Man (vol. 1, pp. 103–28). However, while he briefly acknowledges other Jewish apocalypses in a few places (vol. 1, p. 56; vol. 2, pp. 196, 223, 231), he never mentions the Son of Man tradition in these sources, which at the very least may have influenced John’s theological project. The same could be said for the “seven spirits” example listed above.

For example, one could note that John’s Son of Man theology is distinguished from other Jewish apocalypses that his audience would have been familiar with, such as 1 Enoch or 4 Ezra—both of which refer to Daniel’s Son of Man as a type of divine-redeemer. It is important to the theology of Revelation to note that John takes it a step further and continues to elevate Jesus higher than other Son of Man stories as Revelation progresses, eventually placing him at the center of worship in the throne-sharing scenes of Rev 4–5. John evidently uses extrabiblical and theological reflection common in his day and turns it on its head. The Son of Man is not merely messenger of God’s redemption as he appears in other apocalyptic works—he is God himself returning to make all things new. Theologically speaking, then, Revelation is not simply a storehouse for later Trinitarian reflection as Leithart ably shows; it is also an ancient document that uniquely elevates Jesus to the super-divine status of YHWH himself, when both Jewish apocalypses and Greco-Roman imperial cults thought men entering the divine realm was amazing enough as it is.

This is one of several examples that illustrate how ignoring the apocalyptic influence on John’s own apocalypse weakens theological reflection. It is well past time for biblical and systematic theologians to learn from and engage one another in a consistent, concrete way. This commitment will only strengthen the theological reflections and precision of both disciplines.

This quibble aside, Leithart’s two-volume commentary is remarkable in its depth, breadth, and creativity. This student of Revelation warmly welcomes this contribution to Revelation’s scholarly corpus. It is highly recommended for any serious student or scholar.