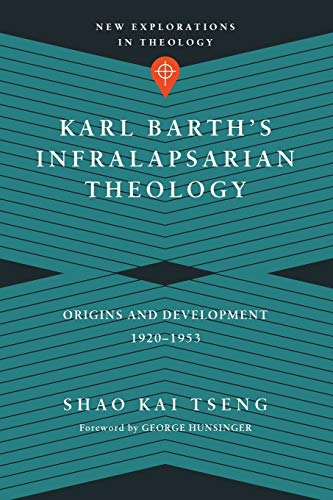 Karl Barth described himself as a “supralapsarian” insofar as his theological reasoning is “detached and purified from the doubtful presuppositions” of the seventeenth-century Reformed controversy (Church Dogmatics [CD] II.2, §33, p. 142). According to Barth, the older “presuppositions can be removed without setting aside the basic thought,” after which the purer material form can be “developed in a christological direction” (CD II.2, §33, p. 143). And this is exactly what Barth attempts to do in his christological restructuring of the doctrine of election: or so he thinks. As the title of the work under consideration reveals, Shao Kai Tseng questions the internal coherence of Barth’s supralapsarian claim. The overall structure of Barth’s theology should not be considered, according to Tseng, “supralapsarian” but rather “infralapsarian,” and this despite Barth’s self-professed—though not uncritical—alignment with the supralapsarian position of the seventeenth-century. Tseng argues, given the historic definitions of the original debate, Barth’s theological position is “basically infralapsarian” insofar as Barth increasingly maintains the “object of divine election is God’s eternal conception of fallen humanity” (p. 42). The adverb “basically” is not superfluous. Tseng is careful to consider “supralapsarian” elements within Barth’s theology as they unfold over the course of his complex theological development, even though Tseng ultimately contends the structure of Barth’s thought is “basically infralapsarian” given that the theological “Yes” to humankind in Jesus Christ always presupposes and negates the “No” of humankind’s fallenness and corruption (p. 267). In more technical terms, for Barth the “object of predestination” is “homo lapsus, but not simpliciter so” (p. 292).

The argument unfolds in two parts. Part one (chs. 1–2) explicates the historical definitions of the lapsarian debate within seventeenth-century Reformed theology (ch. 1), as well as Barth’s understanding of those definitions in his small print excursus in CD II.2, §33 (ch. 2). According to Tseng, Barth’s predilection for the supralapsarian position is in part based on his terminological imprecision as it pertains to the lapsarian ordo in the original debate. In particular, Barth seems to think that the infralapsarian position portrays predestination as having taken place temporally after the fall. This, given historical definitions, is simply incorrect. Both lapsarian positions indicate that the divine decree precedes the whole history of God’s engagement with creation. Tseng is most certainly correct in his assessment then that Barth’s excursus “tells us much more about Barth’s own lapsarian thinking than it does the Lapsarian Controversy” (p. 68).

Part two unpacks Barth’s lapsarian thinking vis-à-vis his developing christological doctrine of election. To do this, Tseng navigates Barth’s early inclinations in Römerbrief II (ch. 3) to his time in Göttingen and Münster (ch. 4), then from his Bonn years (ch. 5) to the publication of Gottes Gnadenwahl in 1936 (ch. 6). Tseng locates in Gottes Gnadenwahl Barth’s groundbreaking resolution to the “contradiction between his actualism and critical realism that marked the chief defect of his theology from GD [Göttingen Dogmatics] to CD I/1” (p. 204). What is most important here is that Barth’s christological revision of election did not arise solely as a result of hearing Pierre Maury’s lecture on Calvin’s doctrine of predestination, but arose out of Barth’s continued struggle with the lapsarian question and Maury’s lecture. In this sense, the basic structure of Barth’s mature theology is laid bare in Gottes Gnadenwahl as Barth theologically works through the lapsarian problem in light of Maury’s lecture. After explicating Barth’s christological reworking of the lapsarian problem in Gottes Gnadenwahl, Tseng traces Barth’s solution through CD II/2 (ch. 7) and CD IV/1, §60 (ch. 8). By the time of CD IV/1, §60 (1953), Barth’s basically infralapsarian outlook had, according the Tseng, fully bloomed: “The incarnation is the history of the electing God’s entrance into the history of God’s fallen covenant partner, in order to sublate the latter’s history of fallenness for the sake of and in the election of all in Christ” (p. 289). Barth, it seems, is a rather complicated infralapsarian.

Overall, Tseng has produced a first-rate study on the intersection of election and christology in Barth’s thought, and has done so from the angle of the historic Lapsarian Controversy. In terms of Tseng’s analysis of the successive stages of Barth’s career, the argument is illuminating and commendable. Tseng helpfully brings out the complexity of Barth’s lapsarian position, which dialectically includes supralapsarian (i.e., the election of Jesus Christ) and infralapsarian (i.e., the presupposition of the fall) elements. And apart from a few less-than-irenic comments regarding Barthian “revisionists,” I say so far so good. However, I must agree with George Hunsinger’s assessment in the “Foreword” that it would still be better to consider Barth a “purified supralapsarian” with “strong infralapsarian elements” (p. 10). For Barth—on Hunsinger’s interpretation—God’s primordial will-to-covenant is eternally grounded in Jesus Christ, and this with or without the fall. When all of Barth’s theological revisions are taken into account, Hunsinger concludes that the manner in which Barth made Jesus Christ the object of election cannot fit easily into the mold of the seventeenth-century debate (p. 12). This is a helpful evaluation and puts a finger on the most contestable aspect of Tseng’s thesis: the Lapsarian Controversy as definitional canon. Tseng wants to frame the question around the seventeenth-century controversy, though he remains somewhat indiscriminate as to the difference between the Lapsarian Controversy and lapsarian christology. In terms of the former, Tseng’s taxonomy is not misleading. The driving question in the original debate centers on the individual “object of predestination” within the logical order of the divine decrees. Yet throughout his argument Tseng blends this discussion with that of lapsarian christology. Lapsarian christology asks the following: How does one construe the ordering of creation around the person of Son, in particular his incarnation? This question does not technically fall within the purview of the original debate, even if Reformed theologians during that period had various opinions about it. The two remained discrete discussions. Once one blends them though, historical contours have been traded for constructive engagement. This is exactly what Barth claims he is doing; he is purifying lapsarianism vis-à-vis christology (CD II.2, §33, p. 149). Tseng certainly recognizes this, which is why he does not mask the admixture of infra- and supralapsarian elements within Barth’s mature theology. My contention is that if Tseng took seriously the contours of the historical debate, as well as the idiosyncrasy of Barth’s position, then the thesis would be inverted. Barth should be considered a twentieth-century supralapsarian after all, although with strong (and historic) infralapsarian tendencies.