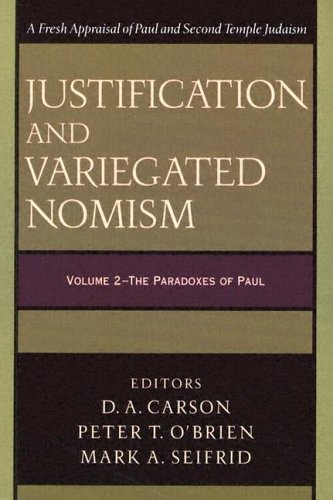 Anyone familiar with biblical studies and contemporary evangelical theology is aware of the debates and discussions regarding the ‘new perspective’ on Paul that has dominated Pauline scholarship for the last 25 years or so. While J. D. G. Dunn coined the term in a 1982 lecture, his work was built on the volume produced by E. P. Sanders on the nature of first-century Judaism—and his claim that Judaism was not the legalistic system of works-righteousness that it was often portrayed to be in Protestant theology. The last two and a half decades have seen a never-ending stream of works advocating and criticizing readings of Paul that build on this assessment of the Judaism contemporaneous with the production of the NT.

The present volume is a collection of essays on Paul that builds on the conclusions of an initial volume which analyzed Jewish texts vis-a-vis the thesis of Sanders. The editors have put together an impressive list of largely evangelical NT scholars for the task, including both Pauline scholars and theologians.

Stephen Westerholm’s chapter kicks off the volume by summarizing the situation to this point, setting the stage quite well, Simon Gathercole’s chapter on Romans 3:21–4:25 is a high point in the volume, wherein the argues that Paul’s discussion of justification has more than merely nationalistic concerns in view, though at points it is difficult to see how his position differs radically from readings of supposedly ‘new perspective’ interpreters.

Other essays cover some of the pivotal texts in Romans and Galatians, along with further chapters on some broader thematic issues at stake, such as the nature of Paul’s conversion and Paul’s anthropology. Carson and Yarbrough also devote two chapters to biblical-theological matters that impinge on the discussion, and two chapters by respected evangelical theologians close the volume.

There are, unfortunately, a number of drawbacks to this volume. First, while the texts in Romans are well-covered, there is only one chapter given to Galatians. More comprehensive treatment of these two letters would have helped to make the ‘traditional’ case more convincing. Further, there is a very little attention paid to Philippians 3, which is one of the battleground texts in the current debate, so one would have expected at least one chapter devoted to it.

Second, large portions of the material in this book are summaries or distillations of previously published work. Students of Paul who were expecting fresh exegetical discussions of Pauline texts or insights into his thought that would turn back some of the advances made by ‘new perspective’ interpreters will be disappointed. This isn’t, in itself, a devastating critique, but it doesn’t help with the impression that the ‘traditional’ reading of Paul has little to say for itself.

Lastly, an introductory or concluding essay would have been helpful, summarizing the contribution that these two massive volumes have made to the field of Pauline scholarship.

Despite these criticisms, the volume will prove to be very important for the on-going discussion of ‘traditional’ and ‘new perspective’ readings of Paul. While anyone hoping that this book would have thrown the knockout punch will be disappointed, those desiring to provide further readings of Pauline texts along a ‘new perspective’ angle of approach will need to deal with the contributions in this volume.