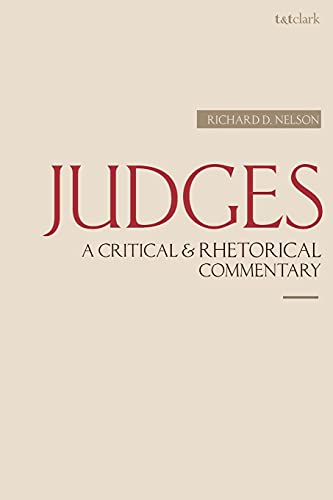 Judges: A Critical and Rhetorical Commentary

Richard D. Nelson is Professor Emeritus of Biblical Hebrew and Old Testament Interpretation at Perkins School of Theology, Southern Methodist University. Nelson has previously written commentaries on both Deuteronomy (2002) and Joshua (1997) in the Old Testament Library series and 1–2 Kings (1987) in the Interpretation series. His doctoral work focused upon the double redaction of the Deuteronomistic History (DH). Thus, it was not surprising to see a commentary by Nelson concerning Judges as part of the larger work of the DH.

Nelson’s approach in this commentary is an attempt to be both critical and rhetorical (thus the subtitle) in his personal reflections on the text/s of Judges. While he claims that commentaries on Judges (or any book for that matter) should not be “idiosyncratic” (p. 1) but should offer multiple voices and various interpretive possibilities, he also states that he made the “painful” decision to not include any bibliographic references for this commentary. This would seem to make this commentary precisely idiosyncratic in that it is only the voice of Nelson offered throughout. Further, his approach seems to call into question part of the very nature of a critical commentary as that which engages scholarship on the subject. This leaves one wondering throughout the volume just who the referents are that Nelson has in mind as he indicates viewpoints on various readings.

Thankfully, the volume includes numerous insightful interpretations making use of rhetorical reading strategies. For instance, in Judges 6 the function of Gideon’s nickname “Jerubbaal” (Judg 6:31) is teased out for its ambiguous potential of whether Baal or Yahweh will win out as the god of Israel in light of Judges 8:33 (p. 135). Another example is Nelson’s drawing out of the rhetorical function of “house of Micah” in Judges 18 (vv. 2, 13, 15, 18, 22) in order to address issues of lodging, proximity of spies to the house, and the overhearing of a voice that is recognized as the Levite (p. 291).

While he is insightful in his readings of the text and while he offers many helps throughout in ways to better attempt to hear the intent of the text, it remains always only his readings without any citation or bibliography. He notes only that his “scholarly peers can track down any sources they want to pursue” (p. 1) but provides no direction or discussion of variant critical or rhetorical readings of Judges. One place this becomes particularly problematic is in his form critical reconstructions of the text. This volume would be benefited by pointing toward and engaging sources for further evaluation of various proposals and arguments (see, for instance, the many bibliographic references throughout Serge Frolov’s commentary on Judges in The Forms of the Old Testament Literature series).

One thus might wonder in what ways such a text might be called properly “critical.” Nelson’s application of a “critical” approach entails primarily the following two critical methodologies: form criticism (discerning the forms of the text as it developed in proposed various settings) and textual criticism (sifting the various manuscripts to propose the most likely original reading). As an example of his form critical approach, Nelson offers potential origins for the Song of Deborah (Judg 5) as potentially belonging to a period of the “Tabor sanctuary,” either “in the late pre-state period or the early northern monarchy,” and setting “aside romantic notions of a date of composition close to the event described” (pp. 113–16). As an example of his text critical approach, Nelson prefers the reading “hair hangs loose” (Judg 5:2) after engaging the root word פרע in relation to potential similar uses of translated phrases in the Septuagint Vaticanus and Symmachus (citing several English translations that follow this reading), against proposed Arabic and Ugaritic cognates, the Vulgate, Syriac, and Old Greek and the LXX of Deuteronomy 34:42 (and the English translations which follow a reading: “leaders take the lead”; pp. 94–95). It is a welcome feature that Nelson has made use of the most recent published text critical work on Judges in the pertinent volume of Biblia Hebraica Quinta.

As to the “rhetorical” elements of this commentary, Nelson relies upon his own diachronic reconstruction of Judges for drawing out various elements of the way the language and structure of Judges was intended to address various issues for original settings he has proposed. Problematic to this methodology is that Nelson does not expound upon his reconstruction of the text in the introduction nor does he engage scholarship on the various proposals for such reconstruction.

Further, Nelson does not describe the ways in which the commentary unfolds with the following elements in each chapter: (A) his translation of sections, (B) text-critical and translation notes, (C) structure and rhetoric, and finally (D) genre and composition. A more expansive introduction (the introduction is only three and a half pages) that includes a more detailed summary of this approach and how it will play out for the overall structure of the commentary would have strengthened this volume immensely.

In the brief introduction, Nelson proposes the commentary was written for any who might make use of such a text (including rabbis, pastors, artists, etc.) and thus he opted to not include Hebrew (or other pertinent foreign language fonts), but instead to transliterate throughout. While this might be an attempt at accessibility, it misses that a “critical and rhetorical” commentary is most likely to be helpful to advanced students of the Old Testament or scholars, and thus would have proven yet more helpful maintaining original language with standardized fonts. However, for those who might access this volume for careful study of Judges, Nelson’s rhetorical and text critical insights would prove helpful in considering the shape and intended impact of the text.