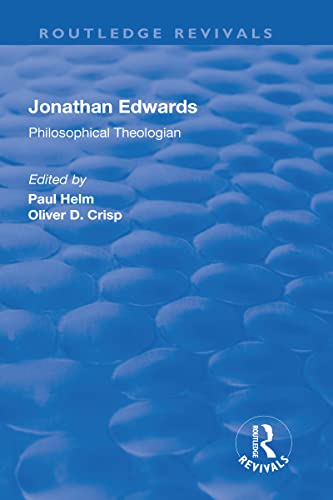 Jonathan Edwards (1703–58) has often been called America’s greatest theologian, but his conservative Calvinism led to relative neglect of his work until the last half-century. This book offers a collection of essays analysing his thought from a philosophical and theological perspective, particularly his views on providence, metaphysics and ethics.

Jonathan L. Kvanvig and William Wainwright both examine Edwards defence of Hell as infinite punishment. Kvanvig appears to have changed his position and now accepts Edwards and Wainwright’s claim that God’s high moral status can explain why sin is infinitely serious. He also finds Edwards’ idea that all sin is against God plausible, not least because God is so intimately involved in sustaining everything else. He and Wainwright agree that Edwards argues plausibly that any sin is infinitely heinous but not that all sinners are infinitely guilty; Edwards does not deal with mitigating factors, e.g. ignorance. Wainwright also considers Edwards’ response to the charge that God acts unfairly in sparing some and punishing others, finding it problematic but not hopeless.

Hugh McCann argues that Edwards’ famous attacks on Arminian freewill are convincing but that his account of choice is simplistic. McCann proposes that nothing in creation predetermines choices but that God controls them. Such a view fits better with experience but is no better at explaining sin than Edwards’.

Paul Helm looks at the notion of personal identity across time in Edwards’ treatise, Original Sin, comparing it with that of John Locke. He concludes that since Edwards believes God recreates each individual at each point in time there is no real basis for personal identity or responsibility, making any view of guilt problematic, let alone guilt from Adam.

Oliver Crisp examines Edwards’ doctrine of occasionalism in Original Sin, wherein God is the only real cause. He then assesses whether this is compatible with what Edwards says elsewhere, arguing that Sang Lee’s influential reading of Edwards is mistaken; he consistently defended occasionalism.

Stephen Holmes also criticises Sang Lee’s view, arguing that his reconceptualization of Edwards’ theology in terms of dispositions and habits cannot be reconciled with Edwards other theological commitments. Furthermore, Edwards traditional ontology is actually more dynamic than Lee’s proposal since it proposes that God is purely and maximally active.

Philip Quinn commends Edwards’ ethical theory in True Virtue, arguing, contrary to previous scholarship, that is can be separated from his theological argument. Edwards’ claim that virtue consists in benevolence to ‘being in general’ or ‘being simply considered’ includes all beings, not God alone.

Amy Plantinga Pauw commends Edwards aesthetic view that harmony and beauty involve relations between things and argues that it demands a relational account of God that is hard to reconcile with Edwards’ endorsement of traditional absolute divine simplicity.

Gerald McDermott explains how Edwards believed divine revelation influenced other religions and held a dispositional view of faith. This would allow him to adopt a more inclusivist attitude than is sometimes thought. McDermott compares this with Newman’s affirmation of continuity between Christianity and other religions, remarking that sophisticated attention to religious diversity goes back centuries.

Michael McClymond notes that Edwards believed salvation involved divinisation, participation in the Divine nature, as do the eastern Orthodox, notably Gregory Palamas. Neoplatonism and 2 Peter 1:4 influence both. McClymond suggests that this might provide a fruitful point of contact between Reformed and Orthodox theologians.

Unlike many collections of essays, several are mutually reinforcing. However, Plantinga Pauw essay endorses Sang Lee, unaware of the arguments of Holmes and Crisp, and the later essays have little connection to the others.

While a historical interest in Jonathan Edwards’ thought would be helpful, nearly all of the essays should interest any philosophical theologian, underlining Edwards’ contemporary significance.