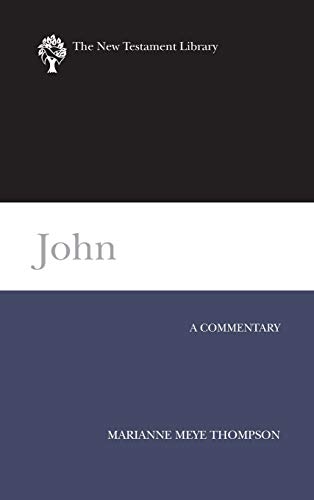 A sizable bibliography of notable past and current Johannine scholarship precedes a substantial introduction followed by the commentary. Even so, Thompson expressly states that her work “is not a commentary about scholarship on the Fourth Gospel” (p. 23). Though she takes into consideration recent discussion concerning interpretation of the Gospel, including archaeology, Jew-Gentile tensions, and possible Greco-Roman sources for understanding John’s Gospel, her objective is to expound the Gospel’s witness to Jesus by devoting attention to its narrative, its structure, its core themes, and its theological and rhetorical arguments (p. 23). She achieves her aim to “illumine the witness” of the Gospel’s narrative by restricting appeal backgrounds to those which aid in the interpretation of the text, without assessing whether these backgrounds are necessarily those of the author or his initial readers (p. 23). This accounts for a commentary that offers explanation of the Gospel’s text uncluttered with the frequent engagements of prior commentators found in many other commentaries.

The influence of Richard Bauckham’s Jesus and the Eyewitnesses (Grand Rapids: Eerdmans, 2008) seems apparent. Thompson explains that “I do not take the Gospel to be a cryptic account of a church at the end of the first century, or of the ‘Johannine community,’” even though the Gospel surely reflects convictions of some earlier believers who came to see Jesus as the promised Messiah (p. 22). She acknowledges that the writer of the Fourth Gospel was doubtless neither unmindful of nor uninfluenced by faith “communities,” but she considers it inconceivable that anyone could “read the history of those faith communities straight out of the Gospel” (p. 22). Instead, John’s Gospel reports who one “first-century Christian author understood Jesus to be” (p. 22).

Thompson affirms that John’s Gospel “stakes its credibility on an eyewitness who had a personal memory of Jesus, namely, ‘the disciple whom Jesus loved’” (p. 17). Even so, again like Bauckham, she does not regard the apostle John to be the author, contrary to ancient tradition. The author is not even one of the Twelve, though she makes the case that the author is intimately knowledgeable of the events concerning Jesus’s passion, including his Last Supper, arrest, trial, and crucifixion. Despite explaining well her case for rejecting the traditional view, Thompson does not provide any convincing alternative.

Thompson includes an instructive section in the introduction that distinguishes John from the Synoptic Gospels. After posing the question concerning what accounts for how John composed his Gospel—whether dependent on or independent of the other Gospels—she adeptly demonstrates numerous features that distinguish John’s Gospel from the Synoptics. Thompson offers no decisive response to the question, but contends that however one resolves the issue, one is obliged to recognize that the Fourth Gospel exhibits “a creative mind that interpreted received traditions in light of a particular hermeneutical stance and theological convictions about Jesus and the significance of his ministry” (p. 8).

Thompson scatters excurses throughout the commentary; the initial four occur within the first ninety pages. She identifies nine topics that call for special attention, more than her commentary addresses: (1) Word and Wisdom in John; (2) Son of God, Son, and Son of Man; (3) The Signs in the Gospel of John; (4) Life and Eternal Life in John; (5) The “I AM” Sayings in John; (6) 7:53—8:11 Jesus and the Woman Caught in Adultery; (7) “The Jews” in the Gospel of John; (8) The Johannine Vocabulary of Faith and Discipleship; and (9) The Holy Spirit in John.

How Thompson treats what scholars of the Fourth Gospel call aporias may puzzle, even disappoint them. Because she avoids arcane lingo, giving her commentary greater accessibility, she appropriately points out the literary “seams” without burdening her readers with extensive engagement of the issues. Instead, she comments on them with the grace and skill of one who has carefully thought through the evangelist’s strategy and offers her own simply expressed summary for each aporia. For example, concerning Jesus’s abrupt movements between Jerusalem and Galilee in chapters 5 and 6, she states, “Even as the Gospel jumps over large periods of time in order to correlate Jesus’ work with significant festivals of the Jewish calendar, so now it has moved from Jerusalem (ch. 5) to the eastern shore of the Sea of Galilee (6:1)” (p. 139). Thompson succinctly addresses Jesus’s saying, “Rise; let us go from here” (14:31), which seems to end his discourse only to continue at length concerning his impending departure and the troubles his disciples would encounter. John narrates Jesus’s actual departure in 18:1. Concerning this, Thompson offers two brief footnotes to support her pithy explanation: “Jesus’ delayed exit to his death, which has been anticipated throughout the Gospel, underscores the weightiness of the words that he now speaks to his disciples” (p. 318).

As she explains in her introduction, The New Testament Library commentary series requires individual authors to provide a translation of the original text. This Thompson does as she acknowledges how daunting the task is given the embarrassment of excellent translations. Within the first chapter of the Gospel she makes two text-critical decisions that challenge much of received scholarship. In 1:18, despite the almost universal support (internal and external) for μονογενὴς θέος, the reading of NA28, she opts for μονογενὴς υἵος because she is persuaded that it “more naturally” follows the statement concerning the Son’s relationship with the Father in 1:14 (p. 27, 34). On 1:34, Thompson accepts ὁ υἱὸς τοῦ θεοῦ (the reading of NA28 on slightly better textual attestation) instead of ὁ ἐκλέκτος τοῦ θεοῦ (the more difficult reading) which other commentators on the Gospel accept (e.g., Barrett, Brown, Burge, Carson, Köstenberger, Michaels, Morris).

Overall, Thompson has contributed an excellent commentary to the series, one that will serve well students, pastors, and academic scholars. She has managed to write a wonderful commentary that suppresses technical matters by keeping them to a minimum and relegated to brief footnotes. Thus, it is accessible even for undergraduate students who take courses in biblical studies. I am delighted to add this volume to my burgeoning shelf of commentaries on John’s Gospel.