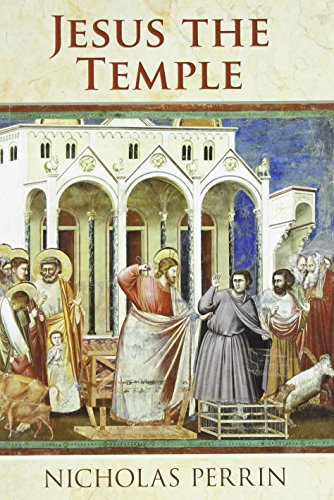 Nicholas Perrin is associate professor of New Testament at Wheaton College Graduate School. He was formerly a research assistant to N. T. Wright. As one reads Jesus the Temple, it becomes apparent that he agrees with Wright on some significant points. For instance, Perrin says at several points that Jews in the first century were still anticipating the end of the exile and the fulfillment of OT prophecies related to the end of the exile.

Perrin's basic aim is to provide a historical Jesus study that brings out how closely Jesus identifies “himself and his movement” with “Yahweh's eschatological temple” (p. 12). The ushering in of the new eschatological temple of God occurs in accordance with the following plot. Jesus and the NT writers identify pervasive corruption on the part of the priesthood who oversee the Jerusalem temple. This corruption has risen to the level of “apostasy within the temple,” which means that “the abomination that causes desolation” (Dan 9:27) has appeared in the temple (p. 12). The abomination's presence in the temple signals that the prophesied time of tribulation has come. The tribulation will culminate in the destruction of the Jerusalem temple. In place of the temple, Jesus establishes the eschatological temple, which includes himself as the new temple and his followers who are in union with him (pp. 11-12, 77-78, 110). Like other “counter-temple movements” from the time of Jesus, Jesus' followers distinguish themselves from the corrupt temple leadership by identifying themselves “both as and for the poor” (pp. 77-78).

In support of his basic aim and plot for the advent of the eschatological temple (referred to as the temple plot below), Perrin provides extrabiblical historical evidence and evidence from the NT. In terms of extrabiblical historical evidence (ch. 1), he points to two other Jewish “counter-temple movements” that appear to support the temple plot that he later finds in the teachings of Jesus and in the NT. One such movement produced the Psalms of Solomon and the other produced sectarian writings that show up in the Dead Sea Scrolls. He closes chapter 1 by showing how John the Baptist's ministry stands in continuity with these two movements. Chapter 2 overviews the NT and tries to show that the NT writers, including Paul, support the same essential temple plot that one finds in the Jewish counter-temple movements of chapter 1. Chapter 3 examines Jesus' temple cleansing in the Gospels. Perrin's goal here is to show that Jesus himself supports the same temple plot when he cleanses the temple and speaks about the significance of this action (see esp. p. 111). According to chapter 4, Jesus follows the example of other counter-temple movements in bringing hope of deliverance to the poor. Finally, chapter 5 connects some of Jesus' characteristic actions, like healing and exorcisms, to ushering in the eschatological temple, which is “centered around” Jesus himself (p. 180).

As far as evaluating Perrin's work, the big question is whether Perrin's big picture will hold up under close scrutiny. Can one really show that Jesus and the NT writers agree with the basic tenets of his plot for the advent of the eschatological temple (his temple plot)? Some elements of the plot seem problematic. The two most noteworthy elements have to do with the apostasy of the priests and tribulation. More NT evidence is necessary to support the claim that the apostasy of the priests means the appearance of the abomination of desolation in the Temple and the arrival of the time of “messianic tribulation” (p. 78). It would be helpful to see a defense of these points. Perrin makes them in passing and acts like the NT supports his points (pp. 12, 77-78), but a more robust defense of them would buttress his proposed temple plot. Along these lines, a more clear explanation of the period of tribulation that he refers to at various points would be helpful for the reader. His limited explanation of it seems to tie Jesus and the church's tribulation primarily to the first century, starting with events leading to Jesus' death and ending with the fall of the Jerusalem temple. But perhaps this is not what he means at all. The reader cannot be sure.

In terms of contributions and helpfulness, Perrin's book attends to a significant theme, namely, the fulfillment of the temple in Jesus and the church. Along the way, he also shows that Jesus was not the only one during his time to point out the corruption of the temple leadership and the need for change (ch. 1). He attends to his temple theme primarily from a historical standpoint and tries to show that the actions of Jesus have a lot to do with ushering in the eschatological temple. He prompts some interesting questions. For example, should one associate Jesus' concern for the poor, his healing ministry, his exorcisms, or his feeding of the crowds with his fulfillment of the temple? These do not generally top the list in terms of actions or teachings that single out Jesus as the fulfillment of the temple, but further evidence may show that one or more do belong on the list somewhere. The third chapter helpfully surveys historical Jesus scholarship regarding Jesus' temple cleansing. I found it to be the most helpful chapter of the book. It demonstrates Perrin's knowledge of historical Jesus scholarship and interacts capably with a large body of data. Overall, Perrin's work is readable and accessible. It will be the most pleasing to those who have an interest in historical Jesus studies. They will appreciate Perrin's attempts to connect Jewish literature, Jesus' teaching, and the rest of the NT along a common trajectory, one that shows that Jesus ushers in the eschatological temple.