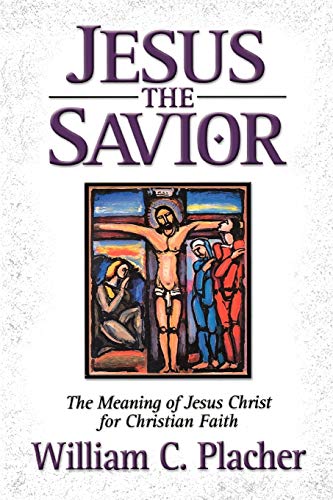 JESUS THE SAVIOUR. THE MEANING OF JESUS CHRIST FOR CHRISTIAN FAITH

William C. Placher, Professor at Wabash College in Indiana, has produced a number of significant works including A History of Christian Theology (1984), Unapologetic Theology (1989), Narratives of the Vulnerable God: Christ, Theology and Scripture (1994), and The Domestication of Transcendence: How Modern Thinking about God Went Wrong (1996). A product of the Yale school and the influence of Hans Frei, he has been called the ‘unofficial historian of postliberal theology’. He wears his undoubted erudition lightly, and this work of Christology is written in his very readable style, accessible to the non-specialist.

Although he does not want to claim historical reliability for all that the NT says about Jesus (the evangelists ‘invented’ some of the stories), he believes that it gives us the right answers to the important questions. Four episodes, central to the four Gospels, give the framework for the book: incarnation, ministry, cross and resurrection. But Placher, though, also wants to look at the last three of these (ministry, cross and resurrection) in three contexts: Israel, the Church and our own lives. Part I, ‘Incarnation’, gives us his doctrine of the Person of Christ—full deity, full humanity, one Christ. It is a thoughtful contemporary introduction to orthodox Chalcedonian Christology.

In Part 2, ‘Ministry’, he begins with the gospel stories and shows how Jesus stands in the prophetic tradition of Israel (the first context). He focuses on Jesus’ message, ‘The Surprising Reign of God’, his rejection of violence, and the inclusive community that he established. The key question however is his identity: ‘Who do you say that I am?’ The final chapter of Part II is on ‘preaching’ (obviously related to Jesus’ prophetic role), and he insists that, like NT preaching, preaching in the Church today, it must start with Scripture. The context ‘for our own lives’ is an ethical issue, and here Placher fastens on the issue of homosexuality. Apparently he sees this arising out of a consideration of Jesus’ ministry because Jesus’ inclusive community included the outcasts and (possibly) because, in his controversy with Pharisees (some Pharisees, he correctly argues) he challenged order and respectability. That Jesus’ inclusive community of the Church should include all repentant sinners (including homosexuals) should not indeed be in doubt, but Placher undertakes to argue that the biblical evidence is not clear that homosexual intercourse is a sin requiring repentance. He, presumably, cannot be faulted for not taking into account Robert A. J. Gagnon’s major work on this issue published the same year, but it leaves his position untenable.

In Part 3, ‘The Cross’, he deals with soteriology. He deals with the passion narratives, considering particularly the role of the Jewish leaders, and relates the Lord’s Supper (this is the Church context) and the nature of the Lord’s presence there to the Last Supper. The atonement is then dealt with in four chapters. The first, ‘Solidarity’, is concerned with God’s suffering with us, even descending into hell, thus manifesting his love and evoking our loving response. Moltmann (unnamed) and Abelard (named) join together. In ‘Priest and Sacrifice’, he considers sacrifice in Israel, and Christian interpretations of sacrifice. While the sacrifice is not to ‘change God’s mind’, he defends Anselm against his critics. The chapter on ‘Reconciliation’ considers that the language of divine anger or wrath is ‘not entirely wrong’. Christ ‘made our sin his own’, and since God’s love really did take the form of wrath as long as we were in the place of sin, Christ came to us in that ‘place’ and experienced ‘the dreadful judgement of God’ (quoting Calvin). Under the heading of ‘Redemption’ he deals with ‘Christ the Victor’. The ethical chapter (‘our own lives’) deals with what he considers the scandal of America’s enormous prison population.

In part 4, ‘Resurrection’, Placher begins with hope. Comfortable Westerners might be content to accept the eventual end of a good life, but what about the children born with devastating handicaps, the prisoners who are tortured in secret police cells, or those who die young after brief lives of pain? The idea of resurrection in the later documents of the OT and in the subsequent faith of Israel led to the belief of the early Christians that the resurrection of Jesus vindicated him and gave hope that God would have the last word over injustice. Placher discusses the nature of the resurrection, defending bodily resurrection (he has come to accept that the tomb must have been empty) and connects all this to Christian baptism. The final chapter is on Christ as ‘monarch’ (in preference to the gender-specific ‘king’). He writes on the nature of the ascension, on ‘Caesar and Christ’, and on ‘Christians and Violence’.

The strengths and weaknesses of this book will be apparent from this summary. It is a comprehensive (though brief) consideration of biblical and theological aspects of Christology and soteriology and an attempt to integrate Christian ethics into this, all within a fairly original and clear structure. Most readers of Themelios, however, will find his views on the historicity of the gospel narratives rather unsatisfactory and his position on the homosexuality issue unconvincing.