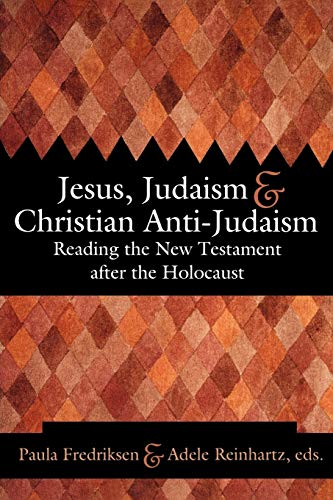 JESUS, JUDAISM AND CHRISTIAN ANTI-JUDAISM: READING THE NEW TESTAMENT AFTER THE HOLOCAUST

Five American historians, all committed to Christian-Jewish dialogue, offer their assessments of those features of the Gospels and Paul’s writings that have contributed to anti-Jewish sentiments among Christians. Their aim is to remove obstacles to good relations between Jewish and Christian communities whether by elucidating the wider context of the more controversial passages or by outlawing certain ideas form these Scriptures unworthy of true spirituality.

Taken as a whole, the essays reveal interesting disagreements on key issues, as the editors frankly recognise. These scholars disagree, for example, on the accuracy with which the historical context to the Gospels and to Paul can be reconstructed. Two contributors, Paula Fredriksen and John Gager, are sanguine about this and so see progress in Christian-Jewish relationships through reinterpreting the Christian Scriptures in the light of their true original context. Adele Reinhartz and Amy-Jill Levineare much more cautious about any ideas of historical certainty, the latter wisely declaring ‘the conclusions historians draw remain at best highly educated conjectures’ (98). They are, as a result more open to the theological challenges that are presented by these Scriptures to Christian-Jewish dialogue.

In the first essay Fredriksen offers a broad overview of the development of Christianity from the first to the fourth century. She does well to highlight the strength of the Diaspora synagogues both as a stimulus to the growth of early Christianity and later as a challenge to it when a Christian orthodoxy began to assert itself. Her treatment, however, is marred by her arbitrary insistence that the term ‘theology’ be reserved for specifically philosophical approaches.

E. P. Sanders critiques some of the stereotypes of Jewish religion which have emanated from 19th century German liberal Protestantism. His essay admirably attains its modest aim. But it is not the place to look for answers to the wider questions of what Jesus approved or what he disapproved or of what he may have added to the religion of his contemporaries.

Gager points out how difficult scholars have found it to combine both the ‘pro-Israel’ and the ‘anti-Israel’ passages in their analysis of Paul. He determines to make the ‘pro-Israel’ passages his starting-point. So far so good. But he falls into a false antithesis of his own when he argues that Paul’s missionary concern was exclusively with the Gentiles, and he did not look for the Jews to be saved though Jesus. Not surprisingly, Romans 10:1–3 does not feature in his treatment.

Levine tackles anti-Jewish material in the Synoptics and in Acts. She makes number of helpful suggestions on how to avoid some popular anti-Jewish interpretations, but recognises that some problem areas cannot be so re-interpreted. She tentatively suggests that anti-Jewish elements should be discarded in the same way that many Christians have dealt with biblical injunctions about slavery and war.

Reinhartz deals in similar vein with John’s Gospel that she acknowledges has much deeper potential for anti-Jewish sentiment. She presents a persuasive critique of the popular idea that this gospel’s perspective is clouded by the predicament of the Johannine community, recently expelled from the synagogues. She is particularly alert to the theological dimension and to the complexity of the treatment of the Jews in this gospel.

These essays do help to set the scene as far as anti-Jewish elements in the NT are concerned; but their insistence that the Jesus of the Gospels is not the Jesus of history will limit their usefulness for evangelical Christians in their approach to the Jewish people.