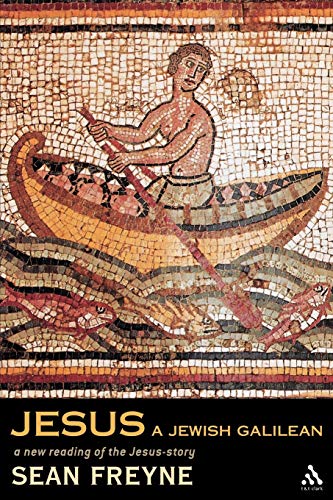 JESUS, A JEWISH GALILEAN: A NEW READING OF THE JESUS-STORY

Students who would like to know more about how the Galilean context may have impacted Jesus’ life, of who are interested in studies that incorporate socio-historical background material with OT theological themes, will benefit from freyme’s most recent publication. This introductory-level book may also be useful to students who would like a break from more detail-focused and sceptical historical Jesus studies. The price, however, makes it a good book for most of us to borrow!

Of particular interest, chapter two, ‘Jesus and the Ecology of Galilee’ focuses of the potential impact of the natural environment on Jesus’ understanding of costs call to him (27). Freyne first considers how Jews and Gentiles related to natural features of the land in general, for example, the concept of covenant blessings and God as Creator, and the presence of nature deities in the region. Then he considers the role of the environment specifically in Jesus’ ministry, such as the influence of surroundings on Jesus’ parables and the prominence of the Sea of Galilee. The prominent role of the land within God’s covenant with Israel and the important links between wisdom and creation in the OT make this chapter not only interesting, but also relevant to historical Jesus research.

Chapter three asks how Jesus related to stories of Israel’s conquest and occupation of the land and how Galilee fits within these stories. Freyne suggests that Jesus’ journey to Caesarea Philippi may have been, at least in part, due to a desire to survey the boundaries of the land God promised to Israel, as well as a particular concern for the northern boundary that allied itself more naturally with the Canaanites in the OT (Josh. 13–20). He suggests that stories about Abraham’s journeys influenced Jesus more significantly than did the conquest narratives, a belief that is perhaps reflected in Jesus’ journeys to pagan areas and to the borders of Israel.

Chapter four emphasizes the symbolic importance of Jerusalem for Jesus’ restoration hopes and suggests that Jesus supported the importance of an Isaianic ‘servant-group’ in contrast to more triumphalistic expectations.

Chapter five considers Judean responses to Greek and Roman imperialism, again bringing in the idea of Danielic and Isaianic servant group in his discussion of Jesus’ kingdom of God message.

Chapter six considers how Jesus’ beliefs about key aspects of Israel’s story, the temple, and the end times may have caused his death. Freyne argues that Jesus took issue with the change in symbolic status of the temple under Herod. The temple glorified Herod’s political achievements, and the temple aristocracy’ (152) went along with this. Freyne suggests that Jesus’ death was the result of his critique of the temple.

Sociological questions shape Freyne’s study, but historical descriptions of Galilee, theological emphases within the ot, a critical reading of the Gospels, and the criterion of ‘contextual plausibility’ primarily affect his conclusions. Freyne’s book is indeed a ‘new reading of the Jesus-story’ that encourages fresh interaction with the Gospels and the stories and environment that influenced Jesus.