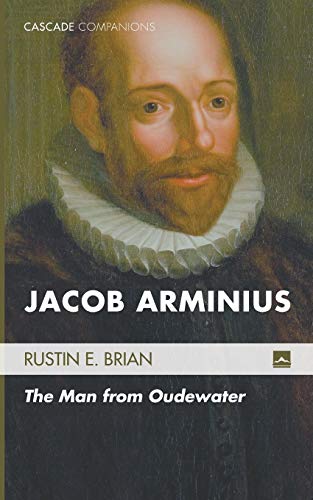 Jacob Arminius: The Man from Oudewater

One of the latest contributions to the revival of Arminian studies is this biographical “companion” from the Cascade series. The author, Rustin Brian, a pastor and theologian with a keen interest in Arminius’s personal experiences and how they formed his thought. The stated goal is that the reader “might discern what it means to stand in the ‘Arminian’ tradition today” (p. xi). This brief but thorough work is divided into three parts: the life of Arminius, the theology of Arminius, and what it means to be an Arminian today.

From the outset, tragedy plays a significant role in this biography. Yet a rise in sympathy does not seem to be the author’s intent as much as his way of explaining Arminius. Nonetheless, the grim scene of the massacre at Oudewater, including Arminius’s family, is bound to gain some sentiment from the reader. The author’s conclusion may not gain so much sympathy from non-Arminian readers—because of its traumatic conception, the author writes, “Arminian theology provides a far more faithful and rich account of theodicy than does highly Reformed theology” (p. 24).

The author’s treatment of Arminian theology in a brief space is surprisingly thorough. Brian packs quite a breadth of Arminian thought into three chapters. The first of these is Scripture. Arminius was both “scholastic and Reformed” (p. 40) and faithful to the Reformation (p. 50) in his view of Scripture. There is little controversy here until the author compares Arminius’s view of the perfection of Scripture with a view commonly held in his own Church of the Nazarene. When describing Scripture as “perfectly inspired,” Brian means that “Scripture perfectly accomplishes its task . . . despite all the while containing imperfections of various sorts, such as misspellings, mistranslations, misunderstandings, and even contradictions” (p. 46). This leap from “scholastic and Reformed” to strangely “Nazarene” is both anachronistic and simply mistaken.

The chapter on Christology and Trinity explores Arminius’s theological method, which is “christologically driven” (p. 45). Arminius “seeks to interpret all things in light of the salvation of God in Christ” (p. 50). In anticipation of the following chapter, Brian describes the election of Christ as “the anchor that holds Arminius’s entire system together” (p. 65). Such an evaluation seems appropriate; the assertion that Arminius’s theology “is more christologically focused than Calvin’s, and certainly Calvin’s followers” (p. 50) is not so clearly true.

The third and final chapter on Arminius’s theology concerns the doctrine of grace. Brian is in agreement with what has now become a common portrayal of Arminius as a theologian of grace. “It is here, more than any other place, that Arminius left his mark upon the church” (p. 58). It is not surprising then that the role of grace occupies much of the final chapters of the book. In the final third of the book, the author engages in comparative theology viewing Arminian theology in regard to Pelagius, John Wesley, and Karl Barth and comparing and contrasting their respective doctrines of grace and predestination. Brian portrays Wesley’s Arminian theology as a mediating third choice between Pelagius and Barth. John Wesley is “the faithful Arminian” though, unfortunately, the author describes the universal role of grace in Arminian theology as “novel” (p. 93), echoing nineteenth-century objectors who attempted to show that the Arminian doctrine of prevenient grace was novel, and therefore false. Finally, Brian finds a similar role of Christology in the Arminian and Barthian theological methods.

I believe Brian achieved the goal of providing a brief companion to Jacob Arminius. His ability to weave some comparative theology into this theological biography is impressive. For the most part the description of Arminius’s approach to Scripture and his theological method is accurate and insightful. The concluding points provide a positive account of what it means to be an Arminian today. And though they are broad, they describe the core values of being an Arminian.

Beyond the few minor criticisms I have already mentioned, there is one theological flaw in the description of Arminius’s doctrine of prevenient grace. The mistake is in the author’s description of what grace does. All who receive grace, he writes, “are given the ability to respond positively to God, as well as reject God.” He continues, “Interestingly, to be able to reject God, then, requires God’s grace” (p. 69). And again, “Salvation and damnation, then, are properly understood as reliant upon God’s grace” (p. 69). I see this as a fatal description of the Wesleyan Arminian doctrine of prevenient grace that is both a non sequitur and nowhere confirmed by Arminius. The flaw is the creation of an internal inconsistency. The anti-Arminian may conclude, as a result, that the Arminian view of grace is not grace at all because by it many will be damned. If this view of grace is true, sinners would have been better off without it. In correction, Wesleyan Arminians have affirmed that the sinner (even apart from prevenient grace) is able to reject God. We do not need grace to reject God; we do that quite naturally. Prevenient grace, rather, restores the ability to accept grace. This is a different assertion from what Brian makes here. Stanglin and McCall (Jacob Arminius: Theologian of Grace [Oxford: New York, 2012]) properly identify the purpose of prevenient grace: “whatever freedom remains to humanity after the fall, it is not sufficient in itself to turn to God. Divine grace must intervene” (p. 151). Grace is needed for salvation and a desire to seek God, but not for rejecting God.