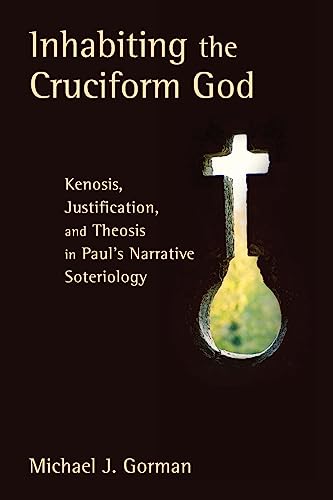 At the risk of engaging in a ridiculously overdrawn generalization, one might say that the current theological climate is characterized by a distaste for distinctions. Nowhere is this more evident than in the study of Paul’s theology, where the traditional distinctions between justification and sanctification, faith and works, and judicial and participationist categories are all under attack from a variety of fronts. All three of these distinctions, quite important in traditional Protestant theology, are discarded in Michael Gorman’s stimulating study of Pauline theology. Gorman, a Methodist who teaches at a Roman Catholic school (the Ecumenical Institute of Theology at St. Mary’s Seminary and University in Baltimore, Maryland), argues that the notion of “theosis,” the idea of participation in the being of God, undercuts and makes irrelevant these distinctions. Gorman thinks that theosis, a concept usually associated especially with the characteristic approach to Christian theology in the Eastern Orthodox tradition, is central to Paul’s theology and provides a way to understand Paul and his significance more accurately.

The heart of Gorman’s argument may be summarized in a syllogism:

Christ’s self-giving on the cross reveals the very identity of God;

Christians therefore are identified with the very being of God.

Gorman establishes the first premise through a careful reading of the famous christological passage in Phil 2:6–11, a text that he argues embodies Paul’s “master story” (p. 12). Key to his interpretation of this passage is his claim that the clause “although he was in the form of God” in v. 6 has a deeper structure that can be translated “because he was in the form of God.” Christ’s self-giving, or “kenosis,” then, is revelatory of God’s very being.

It is in the course of establishing the second premise that Gorman demolishes traditional Pauline distinctions. The long debate between defenders of a fundamentally “juridical” reading of Paul, focused on justification and associated with traditional Protestantism, and advocates of a fundamentally “participationist” reading (e.g., Albert Schweitzer and E. P. Sanders) is resolved by identifying them. Paul operates with a single “soteriological model”: co-crucifixion with Christ is the means by which humans are restored to right covenant relations. This is, in fact, justification, which, far from being a narrow juridical category, means “restoration to right covenantal relations” with God and others (pp. 52–53). Sanctification, or holiness, is therefore not distinct from justification, but its “actualization.” And the faith we exercise in activating this relationship is not to be sharply distinguished from “works” or love: for Paul, faith is “grace-enabled participatory response” (p. 81) that goes beyond mere assent or trust.

Having established the basic logic of Paul’s “theotic” approach, Gorman goes on to show that (1) holiness, a central concern of Paul, is best understood in terms of theosis, and especially a theosis that focuses on the essentially cruciform nature of God; and (2) the cruciform identity of God and our being taken up in that identity lead logically to the Christian embrace of non-violence.

Gorman is motivated in writing this book and in developing his more unitive understanding of key Pauline categories by a concern for what he labels (a la Bonhoeffer) “cheap justification”: “justification without justice, faith without love, declaration without transformation” (p. 41). Who, looking around at the state of the church, would deny that the concern is a legitimate one? And Gorman is not the first, by a long shot, to blame the traditional Protestant teaching of a purely juridical “justification” by “faith alone” for contributing to this sad indifference to true holiness. But his solution to the problem is worse than the problem. To be sure, the participatory language of Paul has too often been undervalued. While it was basic to Calvin’s soteriology (though, of course, not the way it is for Gorman!), union with Christ has often been neglected in many soteriological formulations that present justification too much as a “bare” transaction. And perhaps “theosis,” properly defined, is a helpful category to introduce into discussions of Paul’s theology. The problem, however, is the neglect of the genuinely juridical categories in Paul at the expense of the “participationist” ones in Gorman’s reading. As most scholars now acknowledge, “justification” language is juridical or forensic. Gorman does not really deal with this linguistic argument, but gets around the problem by arguing for parallels between justification, on the one hand, and, for example, union with Christ and reconciliation on the other. But the key texts involved here (Gal 2:15–21 on the one hand and Rom 5:9–10 on the other) do not prove what Gorman thinks they do. He too quickly moves from the obvious association of these themes to their identification. His argument for the fundamentally cruciform character of God has stronger support and deserves more consideration than it is usually given. Even here, though, one must ask if the exegetical support for the idea is solid. Can the key participle in Phil 2:6 really mean at the same time “although” and “because”? Gorman appeals to “deep” as opposed to “surface” structure, but the deep structure receives only fragile support (for instance, with an argument from a dubious parallel; see pp. 23–24).

Gorman is right to lament the tendency to separate justification from holiness of life, faith from love and good deeds. But by merging the categories as he does, Gorman misses what I think are some critical Pauline distinctions and also opens wide the door to the opposite error of a righteousness that is built on the very insubstantial foundation of our own continuing efforts. I find the traditional (rightly understood) Protestant insistence on a necessary and organic connection between the distinct concepts of justification and sanctification and faith and works a more satisfactory reading of Paul and a better answer to the problem of Christian indifference to holiness.