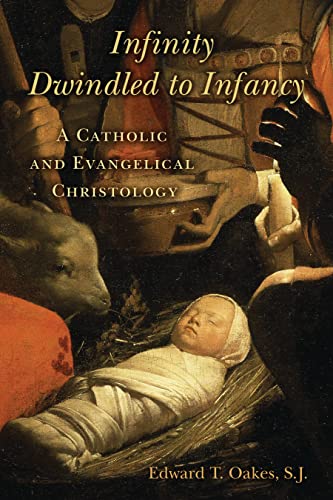 Infinity Dwindled to Infancy: A Catholic and Evangelical Christology

The Evangelicals and Catholics Together (ECT) project is now eighteen years old. Opinion remains divided over the 1994 document and its attempts at rapprochement between the two ecclesial traditions. Where it addresses key Reformational concerns, such as justification, it remains most controversial. But where it addresses the broader concerns of Christian theology, there is significant agreement, most notably in the statement’s first affirmation: “Jesus Christ is Lord.” On this score, Jesuit theologian Edward Oakes, who has participated in the ongoing ECT dialogues, writes, “What always struck me is how little divides us (at least in my estimation) in matters of Christology. . . . For that reason, I cannot help but think that a return to the confession that does indeed unite us—the Lordship of Christ—might serve as a lodestar if we hit other doctrinal storms along the way” (p. xii). These ECT discussions form at least part of the subtext for Oakes’ book, Infinity Dwindled to Infancy: A Catholic and Evangelical Christology. For this reason, this significant new volume on Christology deserves attention from evangelicals no less than Roman Catholics.

In the opening chapter, Oakes develops a theme that runs throughout the book, namely, the paradoxical nature of the incarnation. According to Oakes, this paradox has often been captured best by Christian poets. Indeed the title of Oakes’ book is taken from a poem by nineteenth-century Jesuit priest and poet Gerald Manly Hopkins. For Oakes, attempts to explain away the paradox of the incarnation run the risk of heresy. The mystery of God becoming man—the infinite becoming finite—is, in a sense, a datum known only to faith. It is in this sense that Oakes intends his volume to be “evangelical”: he is seeking to develop a Christology from within the faith rather than an apologetic addressed to those outside of the faith.

In chapters two and three, Oakes treats the biblical data in two steps. First, utilizing a “synchronic approach,” he addresses the “surface data” of the NT (ch. 2). Here, Oakes takes the biblical text at face value, so to speak, without addressing christological development in the early church or the specific concerns of the individual biblical authors. He tackles this surface data by examining the various christological titles applied to Jesus in the NT. Taking his cue from Oscar Cullman, Oakes examines titles that refer to Jesus’ earthly work (Prophet, Suffering Servant, and High Priest), his future work (Messiah and Son of Man), his present work (Lord and Savior), and his preexistence (Word, Son of God, and God). Second, utilizing a “diachronic approach,” Oakes addresses the history of the data, that is, the development and production of the NT (ch. 3). Here, he briefly summarizes the christological teaching of the evangelists, Paul, and Jesus himself. He also addresses the historicity of such miraculous events as the resurrection and the Virgin Birth. Oakes rejects any theory of early Christian development that sees a radical divergence between an earlier “low Christology” and a later “high Christology.” Instead, Oakes argues that even the earlier strata of NT writings (e.g., Paul and Mark) betray a Christology “from above,” presenting Jesus in all of his humanity, to be sure, but from the perspective of his “celestial identity” (p. 85).

The remaining chapters trace the development of Christology in its various historical phases. Oakes addresses the usual suspects: the conciliar developments of the Patristic period, the major medieval theologians (Anselm, Bonaventure, Aquinas, and Scotus), the Christologies of the Reformation (both Protestant and Catholic), and the Protestant Christologies from Schleiermacher to Barth. But Oakes also addresses some neglected christological voices from the past. For example, he includes an extended section on Maximus the Confessor, the great seventh-century defender of dyothelitism, including an excursus on the monothelite controversy. He also includes a chapter on “Christologies of the Heart” (e.g., Pietism and Sacred Heart devotion) and a substantial discussion of nineteenth-century German and British kenotic Christology.

Perhaps especially helpful for Protestant readers are Oakes’s two chapters on modern Catholic Christology. On the issue of Christology and pluralism, he examines more “liberal” voices like Rahner and Sobrino and more “conservative” voices like Balthasar and Ratzinger, as well as several recent magisterial statements on the doctrine of Christ. While more liberal Catholics have argued for something close to full-fledged religious pluralism, more conservative theologians have attempted to hold together both the universality and the uniqueness of Christ’s redeeming work, opening the door to a more inclusivist position. As an example of the latter approach, the late John Paul II argued that “the universality of salvation means that it is granted not only to those who explicitly believe in Christ and have entered the Church” but also to those who may have no access to the gospel but who nonetheless freely cooperate with the grace of Christ as it is revealed to them (p. 404). Christ is still the savior, but explicit faith in him may not be necessary for those who have yet to hear the gospel.

Oakes’s work covers a remarkable amount of territory in just under 500 pages. His treatment of the biblical material is insightful, even if it is truncated: there is no extended discussion of the OT’s Messianic hope. Oakes’s historical survey helpfully summarizes the church’s long history of reflection on the person of Christ, but it stops short of addressing some significant contemporary developments (e.g., the christological reflections of contemporary analytic philosophers). Protestant readers will find some points to quibble over (e.g., his occasional jabs at Luther), but for the most part Oakes does an admirable job of defending our common christological confession. Perhaps most problematic for evangelical Protestants are the inclusivist tendencies of even the more conservative Roman Catholic voices in the pluralism debate. Conservative evangelicals will want to go much further in their response to modern religious pluralism; that is, apart from explicit faith in the proclaimed gospel, there is no hope of salvation (Rom 10:14–16). These points of disagreement notwithstanding, Oakes’s Christology should prove to be a valuable resource for evangelical scholars seeking a fresh defense of Chalcedonian Christology from a Roman Catholic perspective.