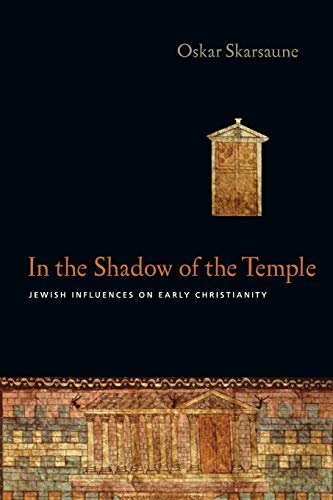 IN THE SHADOW OF THE TEMPLE: JEWISH INFLUENCES ON EARLY CHRISTIANITY

As the title suggests, Oscar Skarsaune’s latest book seeks to explore the Jewish nature of early Christianity. As such, it fills two important gaps in contemporary Christian literature. The first is the lack of a concise yet comprehensive introduction to the nature of second Temple Judaism, an area of history that has undergone some revision over the last half-century with the discovery of the Dead Sea Scrolls and other texts in the Judean Desert. The second is the lack of accessible literature demonstrating the Jewishness of the NT and the early church, a lack that has exegetical significance as we approach the NT and that has apologetic singnificance as we approach the weaknesses of post-Bultmann scholarship and the popular distortions of the Jesus Seminar, both of which have been largely founded on the supposedly Hellenistic nature of the NT witness.

The first part of the book is an accessible and engaging introduction to Second Temple Judaism, managing to do justice to the movements of Jewish history while at the same time pointing to constant features of Jewish life in the period. The book serves therefore as an excellent starting point for research into this period of Judaism and provides a useful framework within which to accommodate the more detailed discussions referenced in the comprehensive footnotes and end-of-chapter reading suggestions. Anyone who has wondered where to begin when faced with the sheer scale of material written on Second Temple Judaism can now take comfort from the fact that Skarsaune has provided an entry point and large scale map.

The second part of the book traces the Jewish elements within the NT and Apostolic Fathers as well as examining—with appropriate caution—archaeological evidence for the early church. The material ranges from the distinctively Jewish nature of early Christology through the concept of the Spirit to the uptake of Jewish symbols in the sacraments of baptism and supper. Such discussions will be of significance to both academics and non-academics: some will find them useful in countering the arguments still popular in NT studies that the high Christology of the NT is a later (Hellenistic) superimposition; others will find them useful as they expound the NT and open its message to others.

There are only two criticisms of any significance to be brought against this book. The first is perhaps simply the inevitable result of the balancing act between brevity and depth: often, the discussions gloss over issues of some significance, such as the questions surrounding the hypothetical fault lines between Enochic and Zadokite Judaisms. The perhaps understandable failure to deal with such issues means that while In the Shadow of the Temple will provide an inroad into the study of Second Temple Judaism, it will never be the definitive textbook.

The second criticism regards the very poor indexing of the work. In the case of the index of subjects, this deficiency is alleviated by the comprehensive contents pages, but in the case of the index of modern authors, it is a frustrating fact that some authors who are cited dozens of times (such as Jacob Neusner) are indexed for only one entry while others, such as Richard Bauckham and Markus Bockmuehl are not even listed, despite being cited several times in most chapters. The deficiency makes it difficult to return to find material in the footnote discussions if a note was not made on first reading. Perhaps, though, it is of significance that only substantial criticism of the work regards its index!