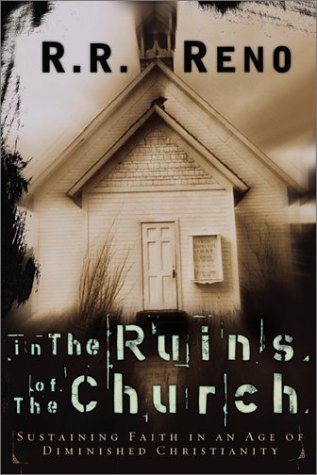 The Western world is in dire need of evangelisation; the role of the church is increasingly marginalised and often morally and theologically compromised. Rusty Reno, writing from the context of American Episcopalian Church, seeks to explore how to relate to a church in ruins.

The book is divided into three main sections. The first, and most interesting section of the book, explores Reno’s diagnosis of modernity and the church’s syncretistic relationship to it. Descartes describes his intellectual project as an attempt to ‘pull down the house of knowledge that, upon closer inspection, is structurally unsound and at the point of collapse’ (19). He aimed to distance and isolate himself from these ruined structures, refusing to rely on old foundations. In its place he constructed a brand new one. Reno argues that abandoning ruins and rebuilding afresh became an unconscious model for the Protestant church. He cites John Nelson Darby of the Plymouth Brethren:

Whilst men slept, the enemy has sown tares. The church is in a state of ruin, immersed and buried in the world,—invisible, if you will have it so; whilst it ought to be held forth as a candlestick, the light of God (16).

Darby left the established church distancing himself from the church in ruins in order to start afresh. Division, separation and recreation can explain much of the denominationalism of our current age and Reno argues that this is modernistic syncretism.

The second section deals with specific failings that Reno sees in the Episcopal Church; for example theological practice, moral discipline (especially the very topical area of sexuality) and liturgical worship (he is critical of liturgical reform as he sees that it is often an attempt to conform to a therapeutic culture). These chapters were the least helpful as they were focused so specifically on the Episcopal Church.

The final section is Reno’s programmatic contribution to the recovery of the church. Here, he seeks to draw the church into a deeper submission to Scripture. Reno is critical of the way the church has responded to the postmodern felt need for a deeper spirituality. He argues that much of the approach of the western church to spirituality is providing the missing × factor. This implies a technique that is very modernist in the approach it has. It is one that often fails to deal with the difficulties and paradoxes of the Christian life and of Scripture itself. Reno draws on Origen to argue that spirituality must be understood in terms of submission to the Scriptures in all of life.

All the chapters, except the first one, have been published in journals such as First Things and Pro Ecclesia. This means that the book lacks flow and is more a collection of essays than a consistently argued thesis. Nevertheless Reno provides food for thought in his wide-ranging and often poetic analysis of the state of the Episcopal Church. There is a gathering point in this series of essays: that the church in ruins does not need to be abandoned, but rather embraced. Reno denounces continued separation and fragmentation into smaller and smaller theological tribes, but rather promotes redoubled intimacy with the fragmented and ruined church.