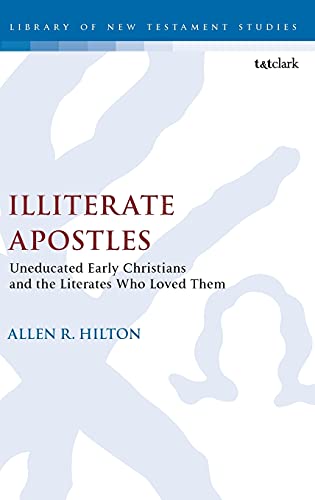 Illiterate Apostles: Uneducated Early Christians and the Literates Who Loved Them

When faced with an ocean of information or apparently conflicting data, we need to ask a few fundamental questions. What is the problem? What evidence is available in relation to the defined problem? Are we missing any important information? Allen Hilton, a former Assistant Professor of New Testament at Yale Divinity School, seeks to answer such questions in his new volume, Illiterate Apostles.

I have never read a new academic work quite like this one. The topic is great. The issues are real. But the research is too far removed from current scholarship to give readers an honest assessment or the necessary nuances that the current state of investigation provides. In fact, there are only eight sources referenced from this century and three of them are by the volume’s editor; giving the appearance that they were only added to the previously established endnotes.

How, then, does one review an academic work two decades out of touch with modern scholarship? Herewith are two specific examples of issues that plague the entire volume, followed by a simple summary of the main topics covered.

Hilton opens his book, with presumably a straight face, by saying: “until very recently” (p. 2), “the most recent research” (p. 2), “[t]he latest authoritative estimates” (p. 3), and “in the academy in recent years” (p. 3). Yet his bibliography does not reflect such statements. On numerous occasions, he speaks as if an author “recently” published something, but the publication is almost 30 years old (e.g., p. 88, n. 10). Never mind the numerous studies that would directly challenge or overturn certain statements and arguments he makes, Hilton does not even offer the reader the latest sources from the scholars he relies so heavily on for his key arguments, such as William Harris concerning ancient literacy. Harris, for instance, has since defended his 1989 findings, but the reader will not learn that here.

Furthermore, even when Hilton tries to connect his topic with today, the evidence is either dated or absent if the serious reader tries to track it down. For example, Hilton begins Chapter 2 by stating what “polls tell us” regarding the reasons why nations continue “inserting education’s enormous price tag into their budgets” (p. 35). If readers pursues his endnote 22 pages later, they will discover that the only source referenced is a blogsite. If they were then to go another step further in trying to track down the blog, they would quickly learn that the blog post was from a decade ago and points to no research or polls to verify. Granted, that does not mean such polls do not exist. But why keep readers that far removed from any available data, even if it is outdated?

Hilton divides his book into two parts. The first part of the book—titled, “The Cause of the Criticism”—seeks to answer one key question: “If most ancients lived out their uneducated lives quietly and almost unnoticed by their educated neighbors, why were the early Christians criticized for being uneducated?” (p. 3). In order to answer this question, Hilton spends three chapters picturing for the reader what he imagines everyday ancient life would have looked like.

Chapter 1 surveys various aspects of ancient literacy. Framing a picture of ancient literacy is certainly a (the?) key to many of Hilton’s arguments throughout the book. Disappointingly, this is the weakest chapter in the book, especially for the reasons shared above.

Chapter 2 looks at six pagan authors writing in the late second and early third centuries. Hilton believes they “represent for us what must have been a widespread opinion” (p. 4). He ultimately seeks to answer the question, “why were the early Christians criticized for being uneducated?” (p. 37). Hilton gleans three reasons from his survey of the criticisms: (1) they lacked rhetorical skills, (2) they could not weigh arguments and discern truth, and (3) they were immoral.

Chapter 3 outlines how Hilton understands the various stages of ancient education. Then he places the issue at hand within that arrangement. As Hilton sees it, certain Christian apologists responded to the so-called “illiteracy criticism” by substituting that charge with the strong moral virtue of “stubborn courage that so ruled the philosophical day” (p. 86). In doing so, the positive philosophical statement about courage undermined the negative educational criticism of illiteracy.

Part 2—titled, “A First-Century Reply”—sets out to answer the question: “why does an author like Luke include a detail like the apostles’ illiteracy [Acts 4:13] in his book?” (p. 148). Before providing an answer to this question and concluding in Chapter 6, Hilton spends two chapters discussing various aspects of the Greek term παρρησία (= “courage”) used in Acts 4:13 in order to “add value to the history of exegesis on this passage” (p. 98). Chapter 4 deals with the social dynamics of the term. Chapter 5 addresses the philosophical nature of the term.

Hilton ultimately argues that critics would have assumed that Christians’ supposed lack of education would have also handicapped them morally. Therefore, Luke purposely answers and refutes this assumed implication of their so-called illiteracy by noting their noble παρρησία.

Hilton’s final chapter—titled, “The ‘Education’ of the Apostles”—wraps up his study by trying to determine “[t]he source of the apostles’ astonishing courage” (p. 149). Hilton argues that Luke understood Peter and John’s courage to be God-given—not via Greco-Roman philosophical training—for the purpose of defending and advancing the gospel. “Clearly,” Hilton deduces, “Luke had Christianity’s critics in view when he constructed the narrative, and it is just as clear that he answers them in a cogent way” (p. 164).

At best, Hilton reminds us that such discussions are not new. He indeed recaps for us what some of the critical questions are. But his research is simply 20 years too late in publication to be useful for the stated audience of this book series, which also claims to be “premier,” “cutting-edge,” and “innovative.”