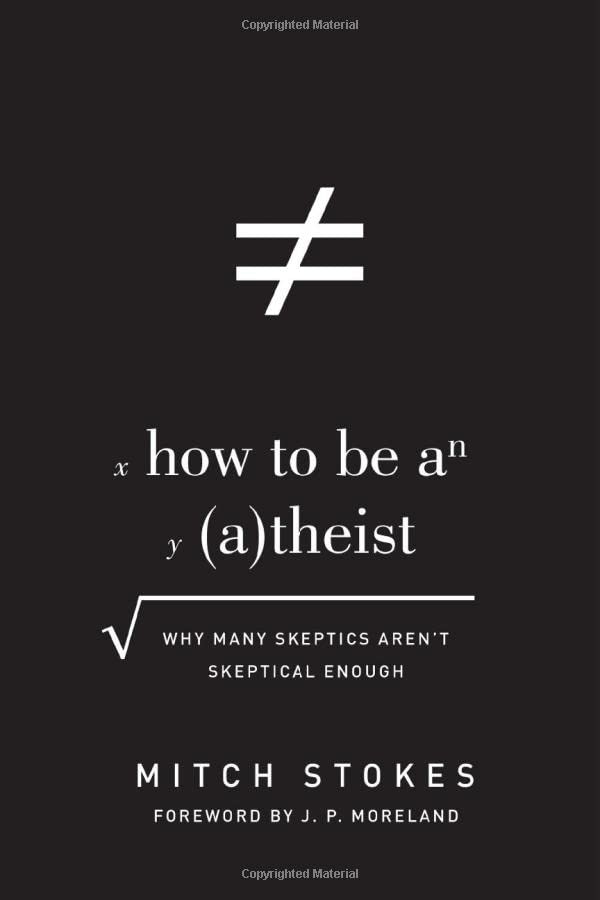 How to Be an Atheist: Why Many Skeptics Aren’t Skeptical Enough

While Christians have faith, atheists have reason and scientific knowledge, attained through skepticism and rigorous testing – so we often hear. Many self-proclaimed skeptics, however, apply their skepticism inconsistently, with core philosophical commitments receiving little critical attention. In particular, science and ethics are bedrock commitments but the efficacy of reasoning in these areas is generally unquestioned. Mitch Stokes, a senior fellow of philosophy at New St. Andrews College comes to pour water on the atheist parade, exploring these two key worldview issues in a way that is technically precise, but accessible. The overall approach deserves critical attention from evangelists in a skeptical modern culture. What is the best balance between undermining skepticism and presenting and arguing for the truths of the Christian faith?

The thesis of the work is that atheists should be more skeptical about both science and ethics. More than half of the book explores reasons to be skeptical about claims relating to science, while most of the rest considers why atheists should be more skeptical than they often are about ethical claims. The findings of science are called into question with heavy reference to arguments from antirealists such as Bas van Fraassen; in summary, science requires a rich theoretical background, and many scientific claims are a result of inference rather than observation. While the arguments are interesting and provocative, they are highly controversial amongst both theists and atheists, and so perhaps should be held to somewhat lightly. On p. 97 we’re told that we shouldn’t be ‘über-skeptics’ of science – but this theme gets little attention subsequently, giving the impression that science should generally be doubted when it strays beyond the observable.

The sections concerning morality I found more persuasive as a whole, drawing on a wider tradition within skeptical thought than does antirealism in science. If atheism is true we find ourselves in a world with many ‘ought’ claims of a prudential nature, but none that are clearly binding in the traditional sense of moral obligation. In both the science and ethics sections some space is given to critiquing Christian philosophers of a more evidentialist leaning – for instance, William Lane Craig on the implications of the Big Bang, and Mark Murphy on a natural law account of morality. These rather strong critiques suggest the book is also intending to be an account of how not to be a Christian apologist, as much as it is of how to be an atheist; in my view it is more convincing where it sticks to the latter.

How to be an Atheist has received high praise from some of the greats of Christian philosophy, with endorsements such as ‘a model for philosophical apologetics’, ‘must reading’, and ‘incisive and wide-ranging’. This response is somewhat surprising given that the approach taken is at odds with that favoured by many of these leading figures. Hopefully the critical reflections offered here on the core apologetic methodology will help in engaging the book’s thesis, which is a very important one which has been developed by a diverse array of Christian thinkers over recent centuries. I begin with some fairly minor quibbles. As a biologist I was interested to see that Darwinian evolution received no focused attention, but is frequently mentioned briefly and often seems to be just behind the scenes. Sometimes it is unguided evolution that is said to be problematic, but often evolution itself seems to be conflated with naturalism. For instance, on p. 174, ‘the evolutionary story of ethics’ is said to imply moral nihilism. On p. 47 we read that ‘it isn’t at all clear that evolution is anything more than a sketch of a theory, even if it is a suggestive sketch’. In any case, the jump from antirealism in quantum physics to doubts about claims in biology needs to be better supported if it is to convince biologists or other scientifically-inclined skeptics with different presuppositions.

The approach of the book suggests an implicit requirement to undermine mainstream science in order to make room for Christian faith. If mainstream science itself was not deemed problematic the inference from science to naturalism would be a more natural move to question. Reasons we might have to take scientific claims seriously rather than be skeptical of them are not presented. I worry that this feeds the destructive ‘conflict thesis’ beloved of the ‘New Atheists’ and their wide circle of influence in popular culture. This assumption of conflict, if it must be promoted, should first be defended. It appears that there is a particular suspicion regarding historical sciences in this book, in favour of the sciences considered more observational, but this is not fleshed out with examples. If the problem is, for instance, evolution, or some aspect of it, this should be stated and explained. If the problem is just naturalism (as held e.g. by Alvin Plantinga), then this should be clarified.

How to be an Atheist lays out its arguments clearly but has little engagement with alternative philosophies, and philosophies of science in particular. A statement of the general philosophical position proposed and its contrast with others would have been helpful. Most scientists and philosophers of science outside of theoretical physics are scientific realists. They might be wrong, but it would have been good to see more dialogue with these views, which are likely the majority amongst Christian philosophers as well as atheists. Sometimes standard Christian apologetic arguments are not stated as strongly as they could be, or are misrepresented. It is claimed for instance (e.g. p. 178), that Christians have said that atheists should act immorally on their worldview. But, I think this is not the argument of the sources cited and clearly not representative of the broader Christian moral apologetic. What has been said, based on the quotes provided, is that atheists would be reasonable to act selfishly. And this is a completely sensible point to make – without binding moral duties, self-interest becomes a more pressing factor in moral consideration.

In our pluralistic secular culture the effect of a critique of naturalism is worth discussing; will it tend to facilitate a shift to pantheism, or deism, or agnosticism, or a spiritualism of some kind, or is it still likely to support theism or specifically Christian belief? On p. 158 it is stated: ‘And of course, if naturalism is false then theism is true.’ Unfortunately, this does not follow, as seen in the work of philosophers such as Thomas Nagel, who promotes a form of panpsychism rather than theism. I also worry that the particular angle taken in this book’s response to naturalism may feed the story beloved of ‘skeptics’ that religion should be afraid of the progress of science. Unfortunately, the arguments given serve to undermine the powerful apologetic available from the real success of scientific metaphysics. The orderliness of the universe as discovered by science can offer strong support for belief in God.

I end with some key questions and points which the book raises as for Christian apologetics. Firstly, does an evangelical approach to Scripture and worldview commit us to some form of scientific antirealism? Secondly, if a Christian academic holds a belief that mainstream science is wrong about a consensus position, should this be somehow noted in books touching on the topic? An obvious example is the age of the universe, and disclosure of one’s position may be particularly relevant for those teaching at institutions requiring a particular view on the topic. When writing about connected ideas such as evolutionary theory or modern cosmological theories, care should be taken not to conflate the theories with their purported implications. In general, when offering an in-depth critique of another worldview, ideally one’s own worldview, or the alternatives to what is being critiqued, should be clearly stated rather than assumed to be the obvious alternative. After all, the New Atheists know well that it is easier to critique alternative worldviews than provide a case for one’s own. Perhaps How to be an Atheist is predominantly written for a Christian audience with little sympathy for the typical views of modern skeptics. If so, the opportunity for engagement implied by the title has arguably been missed.

Despite these concerns, I commend further work such as How to be an Atheist insofar as it aims at and achieves both technical precision and accessibility to people not trained in philosophy. The weakness of naturalism as a worldview deserves to be contrasted with the ways in which Christian faith can make profound sense of the world we live in and many of the core convictions of our society.