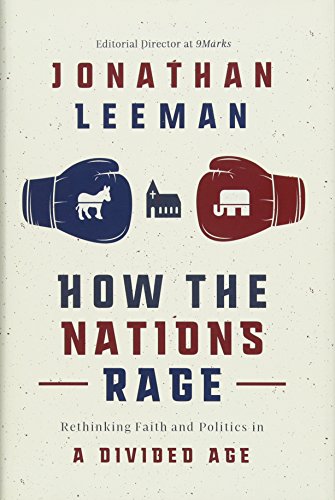 If the past few years have revealed anything in the United States, it is that Christians in that country continue to struggle with the role of their faith in the public square. This has made international news with a bevy of religious leaders of various theological persuasions telling the faithful that to honor God they must vote for one particular candidate and protest mightily if the desired candidate does not win. Meanwhile, in light of growing ostracization of orthodox Christians who refuse to conform to the various demands of the spirit of the age, other Christians are calling for the faithful to withdraw from the public square, build distinctly Christian sub-communities, and hope to remain standing when the political forces of the world have destroyed one another.

Faithful political engagement for those who believe in the God of the Bible is not a new topic for debate. Indeed, Scripture provides numerous examples of rightly and wrongly working in the public square. Church history is replete with case studies of good and bad practices. The challenge is not a lack of examples or material for discussion, but clear principles that can be applied in a variety of circumstances. Only by understanding the broad, enduring strategies for participation in political activity as uncompromised Christians can the church effectively retain its witness without neglecting the duties of citizens.

Jonathan Leeman’s book, How the Nations Rage: Rethinking Faith and Politics in a Divided Age, offers a positive framework that should help Christians meet today’s challenges and those of the future, as well. Leeman serves as editorial director at 9Marks, a ministry focused on building healthy churches, and has written academically on both church polity and Christian political engagement. This volume offers a very accessible distillation of his earlier book, Political Church: The Local Assembly as Embassy of Christ’s Rule (Downers Grove, IL: IVP Academic, 2016).

How the Nations Rage is divided into eight chapters, with a conclusion. In Chapter One, Leeman sets the stage for the book and outlines his goals for the following chapters. He focuses on faithfulness, calling Christians to be better disciples in order to make the world better. The second chapter details one of the major problems Christians confront in a liberal democracy: the assumption that a naked public square is both possible and desirable. This chapter offers a reasoned critique of the political philosophy of John Rawls, encouraging believers not to abandon their faith when making persuasive arguments in the public square. Chapter Three wrestles with the thorny question of patriotism; Leeman offers a moderating approach that views the nation as a good subordinate to the greatness of God.

The fourth chapter of How the Nations Rage is a helpful political hermeneutic. No “side” in contemporary political debates has a corner on proof-texting. Leeman recommends seeing Scripture as a constitution rather than a set of cases to be gleaned for precedent. In Chapter Five the argument shifts to the purpose of government, which is limited and significant. Government, for Leeman, serves as a means to pursue the common good and restrain evil, but not as a functional savior. The sixth chapter deals with the proper function of the church as a political organization concerned with the advance of the gospel rather than particular policy agendas.

In Chapter Seven, Leeman addresses the important question of the manner in which Christians comport themselves. He argues the church should assume the posture of ambassador—firm, reasonable, and confident in the goal of justice—not of culture warrior. When the church engages in political strife improperly, it risks being coopted by parties with ulterior motives and thus risks losing the gospel. The eighth chapter sketches out arguments on justice and rights. In this chapter, Leeman attempts to articulate some of the complexity of the careful balance between freedom and responsibility. He first defines justice, then offers a dozen principles for doing justice drawn from Scripture. The book concludes on a hopeful note. Though the United States is divided and rages against itself and those outside, Leeman finds comfort in the sovereignty of God over all things, which will lead to the final arrival of justice when Christ’s kingdom is fully inaugurated on Earth.

How the Nations Rage is a good book and well suited for the present political environment. Leeman’s arguments are helpful and refreshing. As a Christian political philosophy, the path paved by this book weaves narrowly between totalizing engagement and monastic withdrawal. Whether the reader agrees with Leeman on every point, the arguments of this volume are careful made and deserve diligent consideration. The gospel is at the heart of Leeman’s vision for the church, which ensures that the uniqueness of the bride of Christ remains at the forefront of this book about politics.

This book is subject to the limitations of its format; it is a popular level book with rigorous research behind it. As such, the astute scholar is likely to find Leeman’s case under-supported. There are points where some readers will want additional explanation, but which were likely limited to make the book succinct and accessible. However, if the reader places this in tandem with Leeman’s academic volume on the subject, the strength of the case improves immensely. Additionally, this volume is contextually oriented toward the United States, which will limit its appeal to Christians in other nations. Despite this contextual limitation, it may still benefit readers outside of the United States.

This is a useful and worthy book for the church right now. How the Nations Rage will serve as an excellent resource for pastors and congregations as they seek to navigate the ongoing political turmoil. This is a book that deserves wide reading and careful consideration. Healthy conversations about the church and politics are likely to result.