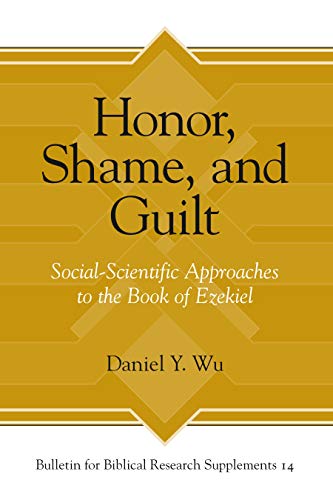 Honor, Shame and Guilt: Social-Scientific Approaches to the Book of Ezekiel

Social-scientific approaches to the Old Testament range from forced and wildly inappropriate impositions of ideas from alien contexts to illuminating and profound explorations of the biblical text in the light of useful comparisons with similar cultures. In this revision of his University of Sydney doctoral thesis, Daniel Wu has provided us with a stellar example from the latter category. This study will be of value both to those interested in the concepts of shame and guilt cultures, which have become a staple in both OT and especially NT studies, as well as to the smaller circle of Ezekiel scholars.

Wu begins his thesis with an extensive analysis of the concepts of guilt and shame, and especially the practice of contrasting so-called “shame cultures” with “guilt cultures.” This survey alone is worth the price of the book. He argues that these distinctions are overly simplistic, as commonly used, and that in fact most cultures combine varying proportions of shame and guilt. That is to say, all societies actually utilize a combination of external and internal sanctions to rein in aberrant behavior. Wu is perhaps particularly sensitive to these complexities given his own heritage as an Australian-born Chinese, and therefore straddling two cultures.

In addition to his discussion of shame and guilt, Wu also explores the opposite concept of honor. Here he notes that previous studies have helpfully drawn attention to the relational context in which honor is gained or lost. However, Wu rightly points out that with respect to the OT, in addition to the “Public Court of Recognition,” the “Divine Court of Recognition” has to be taken into account. Honor is not merely bestowed by human acknowledgment; that would make the deity’s honor ultimately dependent upon the worshipper. Rather, in the OT, honor has a substantive aspect to it: it is a quality that properly belongs to YHWH and which ultimately can only be bestowed by him (p. 71).

This, it seems to me, is fundamentally correct. It is not that the Public Court of Recognition is unimportant to YHWH in Ezekiel: he is concerned lest his name be profaned among the nations by Israel’s ongoing exile and so he acts in order that the nations may know that he is YHWH (see Ezek 36:21–24). Yet his goal in this is to correct a misperception on the part of the Public Court of Recognition of the true state of affairs, which is the unchanging reality of his glory. Here, as Wu notes, there are strong similarities to the book of Exodus, where similar concerns to display YHWH’s intrinsic glory to a watching world are prominent.

When it comes to shame, Wu argues that the key Hebrew word בושׁ has a broader semantic use of “the experience of causing disappointment”. This, of course, includes the conventional meaning “shame” in some contexts but not all. In particular, whereas modern readers generally view shame as a wholly negative emotion, one strongly to be avoided, bosh may be used in a more positive sense of disappointment with past actions. This helps to account for the persistence of “shame” in contexts of restoration, such as Ezekiel 16 and 36. Conventional understandings expect shame to be removed by restoration, and if it persists, portray YHWH as psychologically abusive in refusing to let go of past transgressions. A broader understanding of בושׁ as “disappointment with past actions” explains how remaining memories of past sin may actually be profitable: they provide an incentive to pursue different patterns of behavior in the future and highlight the magnitude of God’s grace in forgiving his people. Indeed, we might add, this is one of the key ways in which YHWH’s glory is demonstrated in Exodus 34: forgiving, wickedness, iniquity and sin. If such transgressions are completely forgotten, then a prime element of YHWH’s character is obscured. But in the light of his forgiveness and love in the gospel, memory of our past sin need not overwhelm us with the psychological sense of shame. As Wu puts it, בושׁ “is necessary for sinful people to “know that I am YHWH” (p. 130).

This otherwise fine work is somewhat marred by the frequency of typographical errors, both in the English text and especially in the Hebrew, where some failure in the “right to left” program results in the Hebrew letters frequently being transposed – especially in the section headings. Apart from this minor quibble, however, the work is highly recommended.