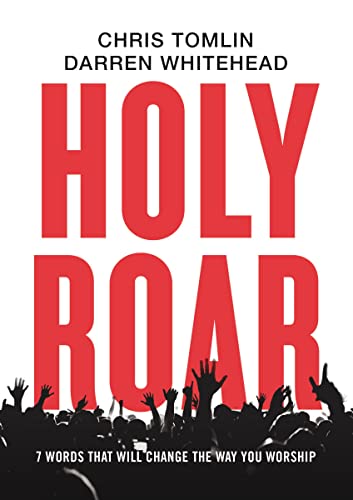 Holy Roar: 7 Words That Will Change the Way You Worship

The origin story of Darren Whitehead and Chris Tomlin’s Holy Roar: 7 Words That Will Change the Way You Worship goes like this: Tomlin heard Whitehead preach on the seven biblical Hebrew words for praise. It was a sermon that, in his words, would “change the way I led worship from that day forward.” Tomlin texted Whitehead immediately. “Your message was amazing. Everyone needs to know these words. It needs to be everywhere. Maybe even a book!” Whitehead texted back saying they should write it together. They did just that over the summer of 2017. Right around the time of the book’s release in October, Whitehead joined Tomlin on his “Good Good Father Tour,” delivering the seven-words message as a powerful exhortation on each night of the tour.

The result of their collaboration is a book which is neatly structured and very easy to read. Whitehead and Tomlin’s writing is skillfully efficient; big on impact but not on word count. At 128 pages of relatively large print one can read the whole thing in an hour or two. Each chapter forms a consistent triptych. Panel 1: A well-crafted retelling of an event in Whitehead’s life. Panel 2: An explanation of a Hebrew word and its implications for Christian praise. Panel 3: Tomlin telling the story of a song he’s written that captures the chapter’s theme.

The stories that bookend each chapter are gripping. Two excited sixty-year-olds dragging Whitehead into the festivities at a rowdy Jewish wedding; the spiritual potency of the Christian music played during his wife’s labor; crying over the phone with a father whose son was on life-support after a motorcycle accident … and suddenly woke up. They’re emotive. They’re sharp. And each illustrates its chapter’s theme precisely. Here the sermonic history of the book’s content brings with it a persuasive rhetoric which works in its favor.

Each chapter also has a section of quotes and discussion questions. These excerpts from historical voices may be the best part of the book. Calvin, C. S. Lewis, Luther, Tozer, Spurgeon—each lends a short and sweet sound bite. Martin Luther King Jr. introduces the final reflection with a profoundly rich quote on the social experience of worship as a realization of unity that transects all levels of life: “Whenever the church, consciously or unconsciously, caters to one class it loses the spiritual force of the ‘whosoever will, let him come’ doctrine, and is in danger of becoming little more than a social club with a thin veneer of religiosity” (p. 118).

Despite these positive aspects, the book’s core content fails decidedly. How so? The short answer is that the seven Hebrew words simply do not mean what Whitehead tells us they mean. Each one has been semantically mishandled, mostly due to his reliance on a very outdated Hebrew dictionary.

His definitions are taken from Strong’s Concise Dictionary, a concordance-turned-dictionary written in 1890 which doesn’t delineate homonyms (rather than a modern dictionary which makes it clear when two words with the same spelling have different meanings). With the different senses of these praise words conflated, Whitehead then tries to show how each one is unique. We’re told, for example, that ידה—which basically means “praise” or (rarely) “shoot/throw”—means, “To revere or worship with extended hands. To hold out the hands.” (p. 18) The concept of shooting has meshed with that of praise to form a definition which bears no relation to the way the word actually functions. Whitehead gets six out the seven words wrong in a significant way, and four times it is because of conjoined homonyms.

This error demonstrates one of the basic “exegetical fallacies” well-known to biblical scholars. The “root” or “etymological fallacy” draws conclusions about a word’s meaning based on the meaning of cognate words, whether they be ancient ancestors or contemporaneous cousins. The mistake is equivalent to suggesting that when a poker player folds, it carries the notion of creasing and bending his cards. Or, because “clue” derives from the Middle English “clewe” (a ball of yarn used to guide one out of a labyrinth), modern usage of the word clue therefore contains a deeper meaning related to balls of string. The words certainly have a genetic resemblance, but they are different words. We know sometimes words have two meanings, but (excepting cases of puns or double entendre) they don’t mean two things at the same time.

Not all of the misdefining results from root fallacies, however. In one case Whitehead expands a word which means “thanksgiving” to include “Thanksgiving for things not yet received.” (p. 56) The dictionary citation provided says nothing of this additional nuance, despite the footnote making it appear to have been found there.

While this and other linguistic gaffes are the book’s primary flaw, it also contains a number of significant errors of fact. For example, Whitehead claims that the Hebrew word ברך (meaning “bless”) occurs 289 times in the Psalms; it actually occurs 74 times. Examples of words as they are used in laments end up generating conclusions about singing in contexts of enthusiastic celebration, which leads to speculative historical reconstructions. He appeals to “Scholars of the ancient Hebrew” at one point to make an ungrounded claim about ברך (p. 74). According to these unnamed experts it means “bending low while keeping one’s eyes fixed on the king.” No doubt such actions could accompany a blessing, but they are not included in the meaning of the word itself.

One of the strangest things about Whitehead’s thesis is that there are various Hebrew words that do mean all of the things that he tries to make his seven words mean. While some of the chapters land in reasonably good places the exegetical vehicle that gets us there is dangerously unstable. And that matters because a whole host of subordinate conclusions are drawn along the way that mislead the reader. More concerning still is the fact that the book teaches a method of interpretation that is potentially generative of false theology.

Tomlin says he truly believes that this book will change the way you worship. It might. But it won’t be because it teaches you very much about ancient worship practices or the true meaning of the various Hebrew words. In fact, the inaccuracies in Holy Roar are such that it impoverishes our understanding of biblical praise. It thus serves as a salutary reminder of the importance of sound exegetical method, linguistic skill and even a little bit of fact-checking. Therefore, instead of reading it in the hope of finding out what is hidden behind the words in your English Bible, read your Bible confident that the translation committees know more than a little about the meaning of Hebrew, Aramaic, and Greek words.

Despite these deficiencies, the book’s intended aim is admirable, and most of the overarching sentiments reflect true aspects of a theology of music which is in harmony with the teaching of the Scriptures. Music does touch the affections in profound ways. We should praise God for the things he has promised he will do. Our focus in praise should be King Jesus. The themes of the final chapter are especially good: God’s love is such that it can inspire praise even when we find ourselves in life’s “dry places”; all nations are called to join in praise of the one true God; our voices can combine in powerfully united anthems; and we praise God for the sake of the next generation. These are all welcome theological landing points, and the book’s call for the church to engage in more exuberant, embodied praise is important to hear.