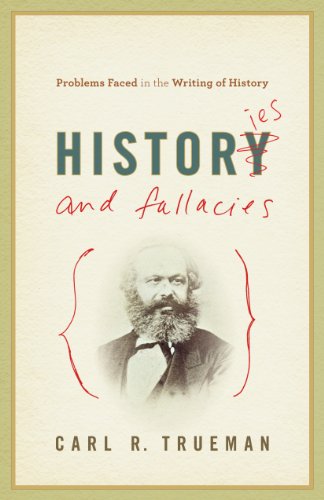 Histories and Fallacies: Problems Faced in the Writing of History

Carl Trueman is Professor of Historical Theology and Church History and Paul Woolley Chair of Church History at Westminster Theological Seminary in Glenside, PA. His Histories and Fallacies: Problems Faced in the Writing of History is a vibrant and engaging introduction to critical historiography, the method by which one writes history. Trueman's work is at base an apology for history itself, an especially careful critical history that advances the cause of truth. Nowadays, “the question has been raised in various forms as to how we know the stories being told us by historians are reliable” (p. 15). After all, we live in the Age of the Perspective, when everyone has an opinion and every opinion is valid. Like most any good piece of history, Trueman's work thus begins with a problem, a question, that he answers from various angles.

His first chapter considers the recent phenomenon in historical circles known as Holocaust denial (HD). Truman wisely concedes from the outset that “history is not simply 'the past' but is a representation of the past by someone in the present” (p. 26). He cites approvingly John Lukacs's definition of history as the “remembered past” and notes upfront that no history is neutral. This does not mean, however, that history cannot be objective. It is true in Trueman's view that the historian cannot prove beyond a shadow of a doubt that events of the past happened. What they can do, though, is marshal evidence and from that evidence construct a narrative or theory that makes best sense of the extant data. In forming the case for the reality of the Holocaust, for example, Trueman references scientific evidence (pp. 39-45), the “aesthetic fallacy” (pp. 45-52), and positive evidence (pp. 52-61) to show that there are various tools that the critical historian uses in the task of narratival defense. Of great importance are “corroboration and verification,” by which the interpreter of the past sifts the evidence and establishes plausibility, if not infallibility (p. 62).

Trueman is a shrewd scholar who practices the virtues he preaches in Histories and Fallacies. He works methodically and carefully, showing himself slow to trust visionary ideas and eager to assemble all the data he can in order to make the strongest possible assertion. As noted, he does not shy away from acknowledging the necessarily subjective aspect of the historical enterprise. “Philosophical commitments” are unavoidable on the part of the historian (p. 67). He champions multi-causality in numerous places, arguing that in all but the most straightforward instances, numerous factors run together to create the events, themes, persons, and trends we study.

The book's second chapter, “Grand Schemes and Misdemeanors,” amply demonstrates this. More than most any evangelical historian I know, Trueman interacts extensively and even appreciatively in places with Marxist historiography. At first blush, this could sound alarming-indeed, will the hammer-and-sickle soon flutter over the entrance to Westminster? In actual fact it is not. Trueman profitably plumbs the work of Marxist historian Christopher Hill, for example, in showing that even the ultimately bankrupt socialist historiography may, with its overweening economic focus, shed light on spiritual works like John Bunyan's Pilgrim's Progress (pp. 90-91).

In the book's third chapter, “The Past Is a Foreign Country,” Trueman nicely distils why history is an essential discipline to theology and philosophy and not their ugly stepsister. In a discussion on historical anachronisms, Trueman opines that “to abstract ideas from their historical context is to place them outside or above history,” a problem that could be addressed in many Christian institutions by a more interdisciplinary approach fusing, say, on-the-ground events and in-the-cloud ideas (p. 116). Many a seminarian or graduate student has wondered not merely what the enlightenment philosophes thought, but what they were like. Knowing that Rousseau was a vengeful prima donna whose behavior seemed bent on placing himself back in the state of nature, for example, sheds valuable light on his theoretical project.

It is fallacies Trueman is after in the fourth chapter, “A Fistful of Fallacies,” and it is fallacies he finds. Denouncing reification (pp. 142-46), oversimplification (pp. 146-52), post hoc propter hoc (pp. 152-56), and several other missteps common in the guild, Trueman again suggests by dint of material that the historian's task is a careful one. He also briefly weighs in on “providentialism,” or an overly confident reading of the hand of God in discrete historical events. Of course, providence is for Trueman “a sound theological doctrine” (in another realm the Westminster divines breathe a sigh of relief), but to his mind, the universality of providence means that it is “of no great use in particular explanations” (p. 167). There is a whole school of evangelical historiography that will read the rather short section on providence with some discomfort; I wondered as I read what Trueman would think of the way George Marsden closes his larger work on Jonathan Edwards by ascribing his greater significance to the greatness of God.

Histories and Fallacies will stimulate and instruct seminarians, graduate students doing historical work, pastors wishing to learn standards for critical history, and the justly growing number of readers who gravitate to Trueman's work (I nearly said celebrity!). It is not perfect; in the introduction, Trueman notes three separate times that many historians talk about theory instead of writing history. His discussion of “providentialism” is also lacking.

Nevertheless, taken together with In Defense of History by Richard J. Evans, this book constitutes a helpful, witty, and informed guide to historiography. Written by one of evangelicalism's most faithful historians and theologians, it is a welcome introduction to the academic discipline in which we “come to understand the forces and influences that shape the way the world was in the past, and hopefully become more aware of the way in which forces previously unnoticed and invisible shape and guide the present,” directing it to a most forceful and elegant conclusion (p. 173).