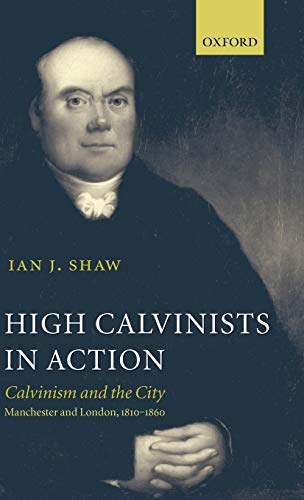 HIGH CALVINISTS IN ACTION: CALVINISM AND THE CITY, MANCHESTER AND LONDON, 1810–1860

High Calvinists in Action may strike some readers as an oxymoron, a bit like Trappist Voices. Ian Shaw, however, demonstrates in this fine monograph that high Calvinists were far from being hidebound dogmatists unable to come to terms with the industrial city. The book focuses on six ministers who were pastors to large and growing churches. Three of these were based in Manchester (William Nunn, William Gadsby, William McKerrow), and three in London (Joseph Irons, James Wells, Andrew Reed). None of these men make it into IVP’s recent Biographical Dictionary of Evangelicals, the indispensable and engrossing guide to evangelicalism’s leading names. Yet it is the very fact that Shaw’s clergy were ‘ordinary’ pastors, without a national or international reputation, that makes them so illuminating. Studies of such ‘secondary’ figures help us to understand what evangelicalism looked like on the ground in different locations.

The book makes an important contribution on at least three levels. In the first place, it is a helpful study of the varieties of Calvinism. Four of Shaw’s subjects were ‘high Calvinists’ in the tradition of John Gill and William Huntingdon, who taught double predestination, limited atonement, and justification from eternity. They also denied that the non-elect had a ‘duty’ to believe and objected to the ‘free offer’ of the gospel to all and sundry. For this reason, I would favour calling them ‘hyper-Calvinists’, since the term ‘high Calvinist’ is often applied to theologians who insisted on double predestination, limited atonement and supralapsarianism, but supported the free offer of the gospel. Shaw’s high Calvinists had difficulty cooperating with other evangelicals, but he demonstrates that their ministries resulted in hundreds of conversions. Two of his subjects (McKerrow and Reed) were ‘evangelical Calvinists’ in the mould of Jonathan Edwards and Andrew Fuller, whose Calvinism was ‘less aggressively defensive’, less systematic, more practical and ‘expressed in more subdued tones’. These men were enthusiastic participants in ‘pan-evangelical’ activities.

Second, Shaw has significant things to say about political theology and social concern. He shows that these Calvinists were heavily involved in their communities, supporting ‘maternal charities, Dorcas societies, soup kitchens, clothing clubs, loan-blankets societies, infants’ friends societies, and poor funds’. Their theology did not stop them expressing Christian compassion through social action. Indeed, Andrew Reed ‘stands in the foremost rank of evangelical philanthropists’. In matters political, class and denomination counted for more than theological distinctives. The three Manchester ministers illustrate this nicely: William Nunn, the Cambridge educated Anglican, was a political conservative who loyally backed the Establishment; William Gadsby, a Baptist from a very poor family, sympathised with radical causes without being an activist; and William McKerrow, the erudite Scottish Presbyterian Seceder committed to voluntaryism, disestablishment, and secular education, became a leading light of Manchester Liberalism.

Finally, the book makes a contribution to the long-running debate about religion in the nineteenth-century city. It reinforces the recent reaction against seeing urbanisation as a secularising force. ‘It was possible’, Shaw concludes, ‘to uphold a high Calvinistic theology, work in difficult inner-city conditions, and attract very large congregations’. His findings ‘further underscore the robustness of working-class religious activity in the early nineteenth century’. The Calvinist churches Shaw has studied were quite capable of attracting hundreds of working class people, particularly artisans and shopkeepers.

All in all, this is rich and complex comparative history, which uncovers the multiple variables shaping the ministry of these men (theology, social class, geographical location, denominational affiliation). The book offers a powerful antidote to the stereotypes, simplifications and reductionism that have sometimes dogged scholarship on nineteenth-century religion.