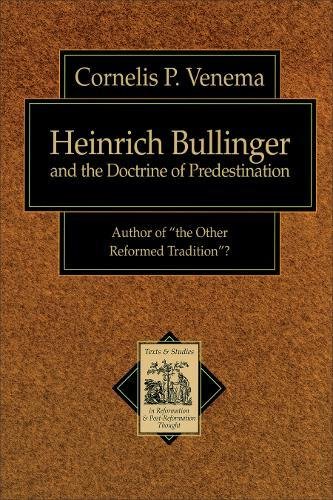 HEINRICH BULLINGER AND THE DOCTRINE OF PREDESTINATION: AUTHOR OF “THE OTHER REFORMED TRADITION?”

The basis for this book by Venema is a debate between historians of the Reformed tradition over the doctrines of predestination and the covenant, in which some scholars have argued that these doctrines represent two quite divergent ways of articulating the theme of sola gratia. In particular Wayne Baker in his book, Heinrich Bullinger and the Covenant: “The Other Reformed Tradition”, believes that Bullinger and other Rhineland Reformers repudiated the double predestinarian views of Augustine and Calvin, instead opting for a single or conditional approach to predestination. Venema, after an initial chapter covering the history of the debate regarding the views of Calvin the Bullinger, proceeds to an evaluation of the Zurich minister’s main treatises on Predestination from the 1530s to the 1560s.

It is widely agreed that Bullinger’s writings reveal a pastoral and practical emphasis to a greater degree than, for example, Calvin or Melanchthon. Venema shows that in his treatment of predestination in his Oratio of 1536 Bullinger while appearing to express his thought in similar terms to the Geneva pastor, emphasises on the one hand a desire to guard against God’s grace depending on the exercise of free will, or an interpretation which could imply that God was the author of sin and evil. He also is anxious to convey the view that all culpability for rejecting the gospel by the non-elect is due to their refusal to have faith in Jesus Christ. In his Decades of 1549–51 the same themes emerge, however, consideration has also to be given to sections of this work which state that God ‘would have all men to be saved, and come to a knowledge of the truth’ (47). Bullinger’s purpose here was to teach that predestination does not exclude, but include the means of grace and that no-one is absolved of the responsibility to believe and repent when the gospel is preached. His correspondence with Calvin between 1551 and 1553 on this subject highlighted core agreement on most points, however, the Zurich minister sought to address issues he felt were played down by Calvin—God’s good will towards all in the preaching of the gospel, the universality of the promises of the gospel and the culpability of the reprobate for their ultimate condemnation (69).

Venema demonstrates that Bullinger maintained a consistent line on this subject in two controversies in 1560–61 and though he supported the apparently stricter Reformed positions of Peter Vermigli and Girolamo Zanchius, it was not a reversion to a stricter adherence to the Augustinian approach, rather the maintenance of his long-held views. There is a helpful reminder from the author here (86) that we must accept that these Reformed theologians showed significant diversity of emphases in their thought, at the same time as an essential unity in their approach to predestination.

In this convincing work Venema successfully challenges those thinkers who have argued that Bullinger represents a different Reformed tradition to Calvin. It is fair to suggest that the Zurich minister places a special emphasis on the universal promises of the gospel, but it goes beyond the evidence to state that he was in favour of a universal atonement. Bullinger was also uncomfortable with a too speculative or rigorous analysis of the various aspects of the divine decree. His primary focus was on the practical implications of doctrine for the people of God. Students of the Reformation will find this a valuable and important book