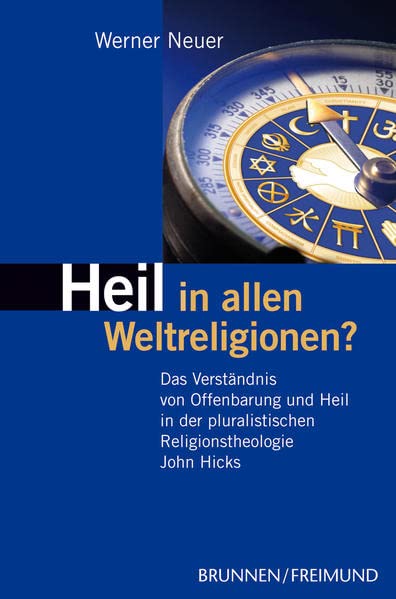 In translation, the title of this book is Salvation in All World Religions? The Understanding of Revelation and Salvation in John Hick’s Pluralistic Theology of Religion. Werner Neuer has given us a study of John Hick’s theology that models fairness, objectivity, and the virtue of thoroughness (Gründlichkeit), which is so highly prized in German writing. The subtitle makes it clear that the orientation of this study is primarily theological, but Neuer does not neglect the philosophical arguments where they are relevant. He ends up on a highly critical note (all one needs to do is to look at the last page to see where Neuer’s analysis is heading), but he resists the temptation to write in a polemical tone. Instead, he proceeds step by step, laying out aspects of Hick’s theology, attempting to clarify it, providing Hick’s own defense of it, and then, finally, presenting criticisms that are so nuanced that they sound virtually understated. These critiques include both internal ones, such as inconsistencies and non sequiturs in Hick’s thought, as well as external ones, demonstrating why Hick’s analysis does not fit into traditional Christian theology.

Neuer begins with a quick look at the teaching of the Christian church prior to the twentieth century and finds that, regardless of the confessions or the mode in which it is understood, an exclusivist understanding of salvation has always been the dominant, if not the only, position within orthodox Christianity. The new intercultural experiences of the twentieth century and the rise of secular cultural pluralism have challenged the church to take a stance on how Christianity relates to the various religions that are now in our proximity. Neuer uses the tripartite division that has become standard in this type of discussion: exclusivism, inclusivism, and pluralism, where Hick, of course, represents the pluralistic option. Having used these three alternatives myself for a long time, I must say that I find them decreasingly helpful. Could we not apply the term “inclusivist” to Hick as well since all religions are supposed to lead to salvation insofar as they represent the model that he advocates? And going one step further, does the term “exclusivist” not ultimately apply to Hick as well since he rejects all models but his own?

Neuer agrees with John Hick in the assessment that all religions in some way or other intend to bring a person to salvation, however construed (p. 82). It appears to me that one has to either limit the meaning of “religion” or stretch the meaning of “salvation” in order to make that statement fit. For some religions (e.g., traditional religions, Confucianism, or contemporary forms of Judaism) personal salvation is not an operative concept. A step in the direction of making this assertion more meaningful is to follow Hick in deriving his model from religions of the “axial age,” roughly located in the sixth century b.c., when most of the world religions originated (p. 142). The term was originated by the philosopher Karl Jaspers (p. 143), who limited “axial” religions to those that originated specifically in this era. Hick uses “axial” as much as a descriptor as a historical referent. He includes religions after the axial age as well, so as not to exclude, say, Christianity or Islam; thus “post-axial” is his preferred term. Nor does he rule out religions prior to the axial age insofar as he can find his basic scheme in them.

As Neuer scrutinizes the thought of John Hick, he finds some difficulties with Hick’s concept of salvation. The problems start with the fact that Hick’s soteriology begins, not with conceptual insights based on the academic study of various world religions but on his personal experience in encountering non-Christian religions (p. 87). Hick saw something that cannot be seen, namely, that behind the details of specific actions and languages, members of all religions are opening themselves to a common Reality that induces them to an equal degree to justice and love among people and that they appear to be equally successful in doing so (p. 92). The obvious question presents itself how Hick could gain that insight, given the specific way the members of the religions themselves describe their beliefs and whatever they consider to be salvation, which are certainly disparate from each other. They worship Allah, Shiva, or Jesus; they do not see themselves as making contact with “The Real.” Insofar as Hick has an answer, it is that the individual believer does not have the opportunity to see the larger picture and so cannot recognize the underlying truths that unite all particular religions.

But then, as Neuer points out (p. 255), the concept of salvation would need to undergo a conceptual transformation, with Christianity being one, though not the only, example. In Christian theology salvation is usually understood as an either-or phenomenon. Depending on the confession, you either are baptized or not, you hold membership in the Church or not, you have faith in Christ or not. For Hick, salvation (i.e., a relationship with the impersonal and indescribable Real) brings about fruit slowly, manifesting itself in a growth in ethics and spirituality, which it may take more than one lifetime to achieve by one person.

To maintain such claims, one should be able to rely on divine revelation, and that is exactly what Hick does. For him, what the axial age signifies more than anything is that it was a time when religion started to be based on revelation. However, as Neuer demonstrates (pp. 147–61), Hick’s version of what constitutes “revelation” turns out to be rather vacuous. The common Christian understanding of revelation consists of the idea of a personal God communicating propositional truth to one or more human beings. But if you remove all of the content words from the previous sentence, you have a description of Hick’s view of revelation.

First of all, for Hick, revelation is not an event in which certain people received some kind of communication. In fact, Neuer points out that on this point (i.e., who actually receives the revelation and how) Hick has never been specific or clear. We must be satisfied with the idea that there is/was revelation, but must cease picturing revelation along the line of God’s sending ideas into a person’s mind, writing words on tablets or speaking to a prophet. Second, the idea of a personal God is already a human conceptualization and places an unwarranted limitation on the origin of revelation. Beyond our inadequate picture of a personal God, we need to remind ourselves, lies the unknowable numinous Real, which is beyond personhood. Finally, according to Hick, revelation cannot be a disclosure of some truths, let alone propositions. What is being revealed is, just as the Real, beyond words or rational description. Human beings clothe the revelation with words and concepts, but the revelation as such transcends all such limitations.

Then how can one say that there is a revelation at all? If it does not consist of something that can be reduced to propositional content and, furthermore, if it cannot be checked for truth because its ultimate subject, The Real, is also beyond our concepts, how can we say that there is meaningful revelation at all? Let me quote Neuer on this point:

For Hick, the decisive distinguishing feature of post-axial religion does not consist of a “revealed truth” or “doctrine of redemption,” however formulated, but in its (albeit limited) phenomenologically knowable soteriological effectiveness. . . . The quality of the revelation of a religion is evidenced decisively insofar as it has persevered in demonstrating its spiritual efficacy and power over history. (p. 146, emphasis his, translation mine)

In other words, we can say that a religion is based on revelation once we see that it has lasted for a long time in providing salvation to people, and the meaning of this salvation is that the person has begun a relationship to The Real. The fact that the revelation of The Real is authentic is credited to its salvific efficacy. We are driven in a circle from one vague term to the next.

Clearly, there is no way in which a review can do justice to Neuer’s book because, given the nature of a review, it is bound to be more polemical than the book itself. Since the greatest virtue of the book is its thoroughness, one cannot reproduce that feature in a few short pages. Neuer concludes in no uncertain terms that John Hick’s theology of religions and traditional Christian theology have very little, if anything, in common. For the careful documentation of each step along the way, I heartily recommend this book.