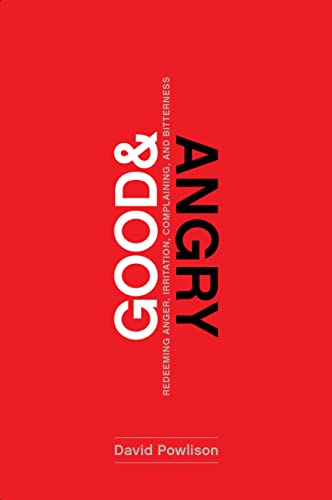 I am angry and so are you, but the anger we both experience is rarely constructive and seldom images Christ, for “It’s hard to do anger right” (p. 2). In Good and Angry, David Powlison aims to convince people like you and me not just that we can do better at handing our anger (although this is one of his stated goals; p. 2), but that as we grow in likeness to Christ, our anger can lead to significantly constructive acts of mercy. This is certainly an interesting take, but can Powlison make the case?

If anyone is qualified to write about an affection as combustible as anger it is David Powlison. That last sentence is not intended to suggest that he is perpetually angry (although he shares many of his own struggles throughout the book); rather, it is because Powlison has interacted with angry people for more than three decades, including stints as a nightclub bouncer (p. 9), a psychiatric ward worker (p. 10), and his better known ministry with the Christian Counseling and Educational Foundation (CCEF). Many readers will be familiar with Powlison’s pamphlets, essays, and books, which deal wisely, biblically, and forthrightly with our complicated human experience. Good and Angry fits this pattern. Written in a conversational tone sprinkled with numerous reflection questions, Powlison clearly intends the book to be of practical use. He develops his position through a four-fold structure: rather than defining anger from the outset (a task reserved for the second part of the book), Powlison begins with descriptions of universal human patterns of anger. Powlison’s constructive argument for redeeming anger occupies section three, while the final section explores several specific “hard cases.”

Because anger is part of the universal human experience (p. 9), anyone might read this book profitably. However, Powlison clearly approaches anger as a Christian and his conclusions for transforming anger into mercy are grounded in the gospel. Although we know that anger is common, when confronted about our own expressions of anger our responses may vary from a lingering sense of guilt to a self-righteous sense of empowerment, or even a general aloofness to our own perturbations. In chapter 3, Powlison identifies six common responses.

But what is anger? “Six common wavelengths” of anger include irritability, arguing, bitterness, violence, passive anger, and self-righteous anger (pp. 37–38). At its core, however, anger is “active displeasure toward something that’s important enough to care about” (p. 39). The six problematic approaches to anger are so common that they seem unremarkable but Powlison’s definition warrants attention as he suggests that anger and its sinful expressions are separable. This definition highlights the moral nature of anger, which “always makes a value judgement” about situations (p. 41).

Perhaps one of the reasons we find it so difficult to disassociate anger from its negative expressions is that our sinful expressions of anger can sweep over us like a tsunami. We find ourselves shocked when mild annoyance quickly explodes into a red-hot rage. Such drastic changes may lead us to conclude that anger is an alien force, an outside thing imposed upon us. Yet this misperception actually hinders one’s ability to view anger constructively, because as Powlison point out in one of the most significant arguments of this book, “Anger is not an ‘it.’ … Anger does not ‘happen’ to you. You do anger” (p. 46). Anger is complicated because we are complex beings. Anger involves physiology, affections, intellect, behavior, not to mention hidden motives (pp. 47–54). Powlison does an admirable job of explaining and illustrating the various interlocking components of anger. Perhaps some Eastern philosophies or Western cults might remain unconvinced that anger is part of everyday human life, but Powlison goes further than merely noting anger’s common-to-man existence; he suggests anger is part of the Imago Dei, part of the very fabric of what it means to be men and women created in God’s image.

From whence anger? Anger arises from our natural sense of justice. Anger perceives the perversion of justice and responds. Had humanity’s first parents exercised appropriate anger in Eden, the deceiving serpent might have died in the garden (p. 63). Yet because Adam and Eve misdirected their anger, the normal human experience of anger is bound up in the effects of the fall and is frequently distorted. Anger is not only natural, it is reinforced by examples and our own choices until it becomes habitus, so familiar that it resembles muscle-memory, nearly reflexive. Yet through the gospel, Christians can redeem anger, which is the primary thrust of the rest of section two.

Powlison’s key theme for anger done well is, “the constructive displeasure of mercy” and the main idea he argues is that human anger “can be remade into God’s image” (p. 72). God is “the most famous angry person in history” (p. 105), yet we, and God’s critics, often interpret his wrath in light of our own experiences with anger, which are tainted by sin and fall. As such, our evaluation is biased from the start and needs to be informed by Scripture (p. 106). Scripture portrays God’s anger constructively. Constructive anger happens when we identify something is wrong and are moved to make a positive difference through mercy, which itself is marked by patience, forgiveness, charity, and constructive conflict (p. 76).

Exercising patience requires us to make a moral evaluations of a situation, become convinced that a wrong has been done, and to respond deliberately and positively. Our best expressions of patience mirror those of God himself (cf. Exod 34:6, 1 Cor 13:4, and 2 Pet 3:9). Forgiveness is “another curious and complex response to true wrong,” a response that identifies a moral wrong but does not seek a “fair” response. Like patience, forgiveness is grounded in God’s character (cf. Ps 103:10–13). Forgiveness might be attitudinal (forgiveness expressed toward God for the sins of another person) or transacted (forgiveness expressed to the offending party; pp. 84–85). Charity identifies something as morally wrong and responds with an “undeserved generous act of kindness” (p. 89). Charity lies at the heart of Jesus moral teaching in the sermon on the Mount (Matt 5:43–44). Patience, forgiveness, and charity form the foundation of a redemption-focused anger, something Powlison calls “constructive conflict.” This sort of conflict seeks to redress moral wrongs by actively seeking the redemption of the offender. Practically, though, how do people accustomed to “doing anger” poorly redeem anger? As Christians are sanctified progressively over the course of their lives, they can begin to do anger in a more godly way. This growth comes through the ongoing reorientation of our sinful patterns and desires, being made new by “dying to what is old” and “awakening to new life.” Powlison describes this as “becom[ing] Christian with respect to our angers” (p. 125). This transformation is slow and intentional: “It takes grit. You must honestly and patiently wrestle with yourself. You must consciously choose to become a different kind of person. You must work it out over a lifetime” (p. 125). Our sanctification is pointed in the direction of Jesus.

One consistent feature of Powlison’s pastoral writings is his use of simple questions to effect deep reflection. Readers familiar with his “X-Ray Questions” from an earlier book, Seeing with New Eyes (Phillipsburg, NJ: P&R Publishing, 2003), will know what I mean. Good and Angry includes numerous questions designed to help reader’s process their own caustic anger and to foster constructive mercy, questions such as: “When you get upset, what do you want?” (p. 54), “When God looks at your conflicts, what does he see?” (p. 127), or “How am I playing God in asserting my will?” (p. 130). Chapters 13 and 14 provide longer series of questions focused on deeper self-understanding of our anger (pp. 149–70) and particular situations that seem unforgivable (pp. 184–87). These are not questions to be asked in the moment of “berserker rage,” but rather reflective questions that can help us evaluate recent or past failures with anger, or even better, proactive questions to prepare us for future acts of constructive mercy.

If there is one question I wish Powlison had explored a bit more deeply, it is the interplay of physiology and anger. The older I get, the more aware I am becoming of the interplay between my will, intellect, desires, and body, and how these factors affect virtue and vice. Powlison states, “Nothing lies deeper than the lusts that lead to conflict” (p. 129). Reflecting on James 4:1–3, he has correctly identified the heart as the source of spiritual struggles, which is indeed key to this passage. Sometimes, however, blood sugar levels that are too low or too high, a sleepless night caring for a newborn, or the side-effects of chemotherapy touch off grouchiness and arguing (two distorted expressions of anger). Do these physiological triggers reveal or amplify heart-level distortions already present, or might they occasionally be the deepest explanation for instances of anger? As Powlison suggests, anger is complicated because we are complicated.

While reading, I had to continually fight the urge to envision certain angry people in my world as those who would benefit the most from Powlison’s wisdom. Yes, they are angry, but so am I and so are you. Simply taking the time to read Good and Angry has helped me recognize instances of irritability that I have allowed to become habitual. Like a mild allergy, these habits have become so routine that I was no longer aware of their subtle, slow erosion of joy and their incompatibility with a faithful witness for Christ. Anger, when done right, fosters the Imago Christi within believers as the Spirit produces transforming fruit and we choose to walk in new patterns of life that are impossible apart from his sanctifying presence. I am not aware of a recent book that addresses anger and mercy in quite this way or to this extent or as constructively as Powlison’s book does. This book does not offer quick solutions or steps to develop a more chilled-out personality. It does deal thoughtfully and biblically with something that is universal to the human experience.