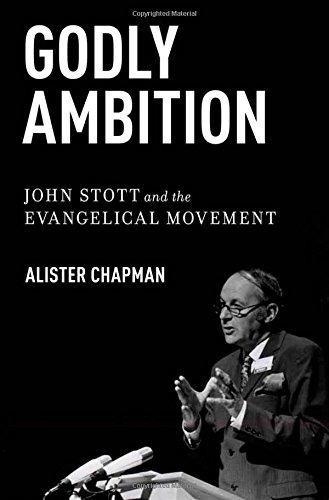 Written by Alister Chapman Reviewed By Nathan A. Finn
History and Historical Theology

John R. W. Stott passed away in July 2011. He was arguably the best-known evangelical in the world after his longtime friend Billy Graham. It seems fitting that the first academic biography of Stott was published within a few months after the longtime evangelical statesman's death. Alister Chapman's Godly Ambition traces Stott's storied career from his conversion and education to his urban pastorate in London to his increasingly global ministry during the years after his retirement from full-time parish ministry. Chapman was granted unprecedented access to Stott's personal correspondence, providing nuance to the less critical biographies written by Timothy Dudley-Smith and Roger Steer. Chapman argues that Stott was a gifted and ambitious man who sought to leverage his influence to help build the evangelical movement in England and eventually worldwide, though always for the glory of God more than the advancement of Stott's own interests.

Chapman divides his book into six chapters that are both chronological and thematic, a natural structure because Stott accentuated different priorities as his career progressed. Chapman begins by discussing Stott's privileged upbringing and education, his conversion to fundamentalism through the influence of youth evangelist Eric Nash, his post-conversion tensions with his family (especially his father), and his calling to pastoral ministry. He was educated at Cambridge, where he shaved some of the harder edges from his earlier fundamentalism and became committed to working from within the Anglican Church toward national revival. During the postwar years, Stott enjoyed considerable success in university ministry, which first introduced him to American evangelicals. He also became close to Billy Graham while the latter was preaching in the UK in 1954 and 1955. Stott came of age during the waning years of British imperialism, and Chapman argues that Stott (and other Anglican evangelicals) continued to believe that an educated ministry committed to reaching cultural elites could be used by God to advance the gospel throughout England and ultimately the world.

From 1945 to 1975, Stott served as a clergyman on staff at All Souls Church, Langham Place, a large church in London; the final twenty-five years he was the rector at All Souls. Stott emphasized expositional preaching and personal evangelism in a culturally diverse context, though his affluent congregation and cerebral sermons made little headway in reaching the poorer and less educated residents in his parish. He proved more successful at influencing other evangelicals through his preaching and teaching ministry.

Over the years, Stott became more involved in interests beyond his parish. As the cultural context changed in the 1960s, Stott had a harder time connecting with university students, though he emerged as the key leader among evangelicals within the Church of England. He pushed back against non-Anglican evangelicals whom he perceived to be sectarian, most notably Martyn Lloyd-Jones. Chapman contends that Stott's elitist background led him to center his efforts on the Anglican Church because of its historic place at the center of English culture. Stott's parish declined a bit as he focused on other priorities, so he stepped out of the pastorate in 1975 to better focus on his broader interests in evangelism, Anglican renewal, foreign missions, and cultural engagement. He also hoped to become a bishop, though that ambition never materialized.

During the latter half of his ministry, Stott devoted most of his time to global missions and promoting cultural renewal. He also became a more accomplished writer, emerging as a leading public theologian within the evangelical movement, and he frequently represented evangelical interests in ecumenical organizations such as the World Council of Churches. Stott drifted further leftward, especially in his political and cultural views, eventually arguing that social justice is just as central to the Great Commission as personal evangelism, though he continued to champion the latter. His views on social justice influenced the Lausanne Covenant (which he helped to draft), though the long-term effects within the Lausanne movement were mixed; non-Western leaders appreciated the broader agenda, while American evangelicals like Graham preferred to focus primarily upon evangelism. Stott was more successful at promoting his priorities through his own ministries, Langham Trust (1974) and the London Institute for Contemporary Christianity (1982). The former ministry promoted leadership development and evangelical theological education in the majority world, while the latter focused on cultural engagement and social justice in Britain. Stott's role at Lausanne and his growing writing ministry made him even more popular outside of England than within his native land, especially among American evangelicals, who provided substantial funding for Stott's ministries.

Chapman's biography is a model for critical, but sympathetic engagement with a leading religious figure. He paints a picture of Stott that does not gloss over shortcomings, including struggles with pride, theological oddities, pastoral frustrations, and interpersonal conflict with other evangelical leaders. Yet Chapman argues that Stott was sincerely motivated by an earnest desire to see the gospel proclaimed, the hurting cared for, Western culture revived, and Christian leaders adequately trained. Stott was a devoted evangelical who was shaped by many factors, including his background, his conversion to fundamentalism, his ecumenical interests, and his ministry successes and failures. For pastors and other Christian leaders, Chapman's book provides a glimpse into the real world of ministry, where mixed motives and unrealized dreams can still be used in the evangelical cause. For scholars, Chapman's book is the starting place for any future studies of Stott (there will be many) and a template for how to write a good biography that balances appreciation for the subject without resorting to hagiography.