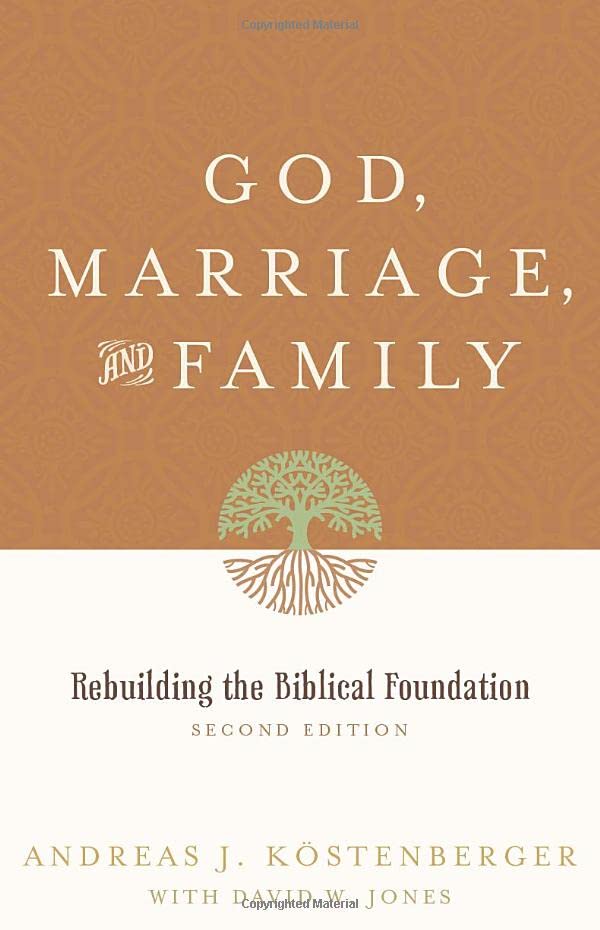 When the second edition of God, Marriage, and Family hit the shelves in 2010, reviewers focused a tremendous amount of critique on a new chapter about family-based ministry. In fact, I think it is fair to say that this theme, which comprised one part of one chapter in the new edition, dominated the vast majority of the online chatter about the book. This was most unfortunate-not because it is an unworthy topic (see Timothy Paul Jones's well-done review in The Journal of Discipleship and Family Ministry 1:1 [2010]: 63-65), but because the controversy seemed to be out of proportion with the book's main contribution. The discussion of family-based ministry is more of a sideline in this book (about nine pages out of 399). Regardless of your views on family ministry, God, Marriage, and Family remains the best biblical theology of family and sex on the market. This is one of the few books (both in its first edition and now in its second) that I have turned to time and again for a cogent discussion of what the Bible says about a variety of controversial family and gender issues. Whenever Andreas Köstenberger writes something, I pay attention. But God, Marriage, and Family may well be his most important contribution of all.

The book divides into thirteen chapters and an appendix. The first several chapters focus primarily on laying a biblical-theological foundation for understanding marriage. After a brief discussion of the “Current Cultural Crisis” in chapter 1, the authors summarize the OT (ch. 2) and NT (ch. 3) teaching on marriage. Chapter 4 discusses the “nature of marriage” as a covenant rather than as a sacrament or contract. This chapter also includes some new material on the meaning of the conjugal act within marriage. Chapters 5-6 summarize the OT and NT teaching on the family, while chapters 7-8 deal with “special issues” related to the family: childlessness, family planning, abortion, birth control, adoption, parenting, physical discipline, spiritual warfare, and family traditions. Chapter 9 gives a brief biblical theology of singleness and explains the special role that single Christians should play in the life of the local church. Chapter 10 considers the ethics of homosexuality and robustly and biblically defends covenanted heterosexual monogamy as the biblical norm. Chapter 11 consists of Köstenberger and Jones's interpretation of biblical texts on divorce and remarriage (the appendix includes technical exegetical details on this question). Chapter 12 sets forth biblical qualifications for leadership in the church with a special focus on the requirement of marital faithfulness. Chapter 13 is a brand new chapter explaining the relationship between the family and the local church. A portion of this chapter takes a fairly critical look at the “family-integrated church approach.”

This book is countercultural in the very best sense of the word. Köstenberger and Jones weave a thoroughgoing complementarian vision of marriage, manhood, and womanhood. With exegetical rigor, they show from the Bible what God's purpose is for husbands and wives. The husband's relation to the wife is based on Christ's relation to his church. Just as Christ loved his bride sacrificially, so also a husband's responsibility consists mainly of leading, providing for, and protecting his wife and family. As the church submits to Christ, so also a wife's main responsibility in marriage lies in submitting to her husband and being a helpmeet to him.

These roles also define what child-rearing should look like in the Christian home. Little boys are to be raised to become men who know and embrace their role as leaders, protectors, and providers in their own families. Little girls, likewise, are to be raised as the trusted helpmeets that God designed them to be as well. So at the center of Köstenberger's book is a distinct, biblical vision for manhood and womanhood that defines every aspect of the Christian family. Köstenberger's point of view runs counter to the egalitarian spirit of the age, but it nonetheless faithfully depicts biblical norms.

In addition to the new chapter on the relation of the family to the local church, Köstenberger and Jones make other helpful changes in the second edition that strengthen the overall work. These include:

In all of this, there is updated interaction with relevant works that have been published since the first edition.

A couple of the new sections are worth highlighting in light of recent evangelical discussions. In chapter 4, “The Nature of Marriage,” Köstenberger and Jones add an entire section on “a theology of sex” (pp. 79-84). Their aim in this section is to explain the biblical “purposes” for sex and to set forth a sexual ethic based upon those purposes. Köstenberger and Jones access the recent work of Dennis Hollinger ( The Meaning of Sex: Christian Ethics and the Moral Life [Baker, 2009]) to advocate four other purposes: procreation, companionship, the public good, and pleasure. With these purposes in mind, Köstenberger and Jones then list ten items that run counter to God's purposes for sex and that are therefore immoral: fornication, adultery, homosexuality, impurity, orgies, prostitution, lust, sodomy, obscenity and inappropriate sexual language, and incest. In a related note, Köstenberger and Jones rule out pornography and masturbation as well (p. 326n56-57). The strength of this section is that the ethical evaluation is not limited to whether the Bible specifically prohibits a given activity (the approach taken in chapter 10 of Mark and Grace Driscoll's Real Marriage [Nelson, 2012]). Rather, Köstenberger and Jones test each activity by its conformity to God's purposes for sex, the ultimate goal of which is the glory of God. This method allows the authors to ethically evaluate activities that Scripture may not explicitly address.

Another important section in the book is the updated material on corporal punishment. This second edition of God, Marriage, and Family was published in 2010, a full year before the appearance of William Webb's major contribution to the discussion, Corporal Punishment in the Bible (IVP, 2011). But Webb gave a preview of some of the main lines of his argument in a paper presented at the Evangelical Theological Society in November 2007, and Köstenberger and Jones very helpfully interact with that paper. The authors highlight three fallacies in Webb's paper that I believe apply as well to Webb's 2011 book. In fact, Köstenberger's critique foreshadows the very careful review that Tom Schreiner penned for The Gospel Coalition in September 2011. Köstenberger and Jones conclude, “Webb's effort to discredit a biblical theology that includes corrective physical discipline by reductio ad absurdum fails to convince” (p. 343n37).

My disagreements with God, Marriage, and Family are very small and virtually inconsequential to my overall positive evaluation of the book. Even though many of the book's arguments are not new, it draws together a tremendous amount of important material into one volume. Also, the book's consistent connection to Scripture makes it stand out among other works of its kind. John Piper was right when he said, “the special value of this book lies in its pervasive exposition of Scripture.” Every page is a treasure trove of biblical wisdom about marriage and family. Every pastor ought to have God, Marriage, and Family in his study as a top-shelf item. There is no other book like it.

Denny Burk is associate professor of New Testament and dean of Boyce College, the undergraduate arm of the Southern Baptist Theological Seminary, in Louisville, Kentucky. He also serves as an elder at Kenwood Baptist Church in Louisville.