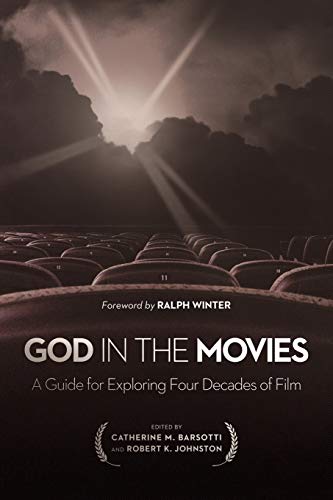 God in the Movies: A Guide for Exploring Four Decades of Film

There is no denying the power of film to shape culture, attitudes, behaviors as well as cause individuals to reflect on life and issues that they may not otherwise contemplate. The influence of film comes from both its widespread popularity as an entertainment medium and from its inherent storytelling power. We watch films for many reasons, but regardless of the specific reason, we watch them because they have the power to captivate, move, and delight us.

It is because of the power and influence of film that scholars and filmmakers have contributed to the book, God in the Movies: A Guide for Exploring Four Decades of Film. They are affiliated with the Reel Spirituality Institute of the Brehm Center for Worship, Theology, and the Arts at Fuller Theological Seminary in Pasadena, California. Editors Catherine M. Barsotti and Robert K. Johnston intend the book to be used primarily as a tool for leading film study groups or for learning how to analyze mainstream films for their spiritual content.

After an introductory chapter outlining the book’s rationale and guidelines for how to best use it, forty films (ten from each of the last four decades) are reviewed with a particular focus on their spiritual significance. Each chapter/review includes study questions, prominent themes, suggested Bible verses, and other ideas regarding how to engage viewers with the spiritual dimensions of the film. The authors also suggest ways to incorporate film clips into sermons, lessons, and other teaching opportunities.

The book is another in a growing list of books written about films and spiritual content and impact. Several contributors have written their own books on similar topics encouraging the reader to engage in serious analysis of secular, mainstream films for their spiritual significance. This genre of book has as its underlying assumption that this type of analysis of film is an appropriate and valuable means of “engaging the culture.”

Films are certainly worth studying for their historical, cultural, and behavioral significance, and, occasionally, for their artistic merit. Some of them do have worthwhile treatments of religious or faith-oriented themes. However, to suggest that studying a broad range of films for purposes of spiritual enrichment is a worthwhile pursuit, is perhaps wishful thinking.

I am speaking as one who thoroughly enjoys the watching and studying of films. I earned degrees at two of the top film schools in the United States. I have taught film courses for nearly 30 years at the university level. I know and appreciate the art and history of film. However, there is sometimes an impulse to over spiritualize works of art—and especially films—in an attempt to justify spending so much time watching and analyzing them. Yes, all films have a worldview and viewers should become adept at spotting and analyzing that aspect of a film. But to suggest that most films are inherently spiritual is a stretch. Can God reveal himself through films and/or other works of culture/art? Of course. However, that does not mean that all films or works of art are equally valuable for discerning his revelation.

While the authors provide some encouraging examples of how films can play a role in pointing people to spiritual things—and sometimes even God, there is little solid evidence that this is an effective evangelism or discipleship tool. While the inclusion of film clips in sermons and other church-based lessons is common practice in today’s churches, the impact of such inclusion usually means that there is less focus on actual biblical exposition. It is not a good tradeoff.

So, do I recommend the book? Not really. The book might be helpful by virtue of its synopses of the films listed. Some of the study questions may help families (at least for the few family films included in the forty) as they discuss films they might view together. However, I do not think the book will be much help for the small group purposes for which it is intended. I hesitate to endorse its use in any outreach strategy.

The other caution I have pertains to the choice of films included in the volume. There are several films among the forty that I would not encourage believers to see. Of course, what films to view is a matter of conscience for every believer to determine, but we should not casually dismiss the power of film to influence us as individuals. Some of these films are clearly questionable.

Like the rest of God’s creation, the arts belong to him. Therefore, there is value in studying, creating, and displaying works of art that bring honor and glory to God and point people to great truths about him and to his beauty and greatness. However, few works of art (including film) do that very clearly. That is why I cannot wholeheartedly embrace the concept of this book as a useful tool for ministry and outreach. God in the Movies aspires to connect the sacred and the profane, but in the end, it too often seems forced and not all that helpful.