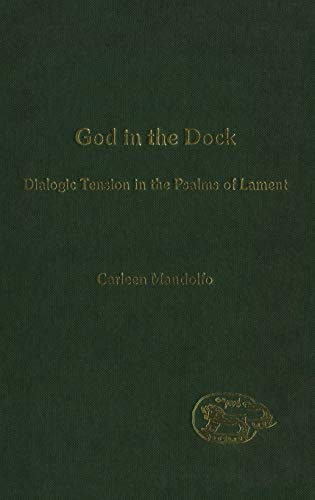 GOD IN THE DOCK: DIALOGIC TENSION IN THE PSALMS OF LAMENT, JSOTS 357

Mandolfo’s study examines the dialogical tensions in the psalms of lament. Thus she is not so much concerned with the well-known and well—researched shift from lament or complaint to praise and thanksgiving which is shared by most biblical laments, but with multiple shifts of voices which also characterises a significant number of laments.

Mandolfo shows that there are often shifts from first person to third person respectively. Thereby she underlines that the shift to the third person is often very different in tone from the surrounding petitionary elements. For example in Psalm 4:

In a number of laments (i.e. Pss. 4, 7, 9, 12, 25, 27, 28, 30–32, 55, 102, 130), Mandolfo observes that, ‘a third person, didactic voice, is inserted into what otherwise constitutes a prayer’. Substantial exegesis of these psalms reveals that they are especially prone to conflict and disputation. On the one hand, the third person voice (Mandolfo calls it didactic voice, i.e. Israel’s normative testimony) asserts that YHWH is faithful and in control, on the other hand, the petitioner’s discourse offers a different view of reality. Although the two voices stand in contrast, they relate to each other. Brueggemann’s dialectic approach to Israel’s theology (i.e. testimony versus countertestimony) serves as a heuristic blueprint for understanding the function of the differing voices within the psalms in question.

While Brueggemann is Mandolfo’s main dialogue partner in evaluating the phenomenon theologically, Bakhin’s sociolinguistic theories provide the blueprint for her socio-rhetorical investigations. Mandolfo argues that the shifting of voices are a ‘generic feature’ of many laments and still reflect their earlier function as ritual dialogue between supplicant and a cultic functionary. She speaks of ‘performative dramas’ that were enacted as part of congregational worship in order to express Israel’s understanding of YHWH in a way that was both loyal to the ‘standard theological viewpoint’, yet authentic and attentive to the often ‘unfair’ challenges life presented.

In conclusion, Mandolfo rightly acknowledges on a number of occasions the hypothetical nature of her socio-contextual arguments. However, even without speculating about the Sitz im Leben of these psalms, an awareness of the dialogical nature of these laments greatly enhances our appreciation of these psalms: for example her well-argued case that the truth claim of the dialogical psalms of lament lies ‘somewhere between the assertion that God is always faithful … and the suggestion that sometimes God is not reliable (and suffering is not deserved)’ (195) is of considerable import. The notion that only when conflicting voices are heard in concert does one arrive at an authentic statement about YHWH and his relationship to Israel, echoes Brueggemann’s approach to OT theology. Although I believe that Mandolfo made a good case for reading the laments in question dialogically, there is, to my mind, a danger of overemphasising the theological authority of the lament. They give voice to ‘temporary’ pain, while a divine revelation as for example found in Exodus 34:6–7 is by the standard of the canon of definite and enduring authority.

Overall, however, Mandolfo deserves credit for probing a largely neglected but important aspect of psalm studies. It is a well-written and clearly structured monograph which undoubtedly advances our understanding and appreciation of the psalms of lament. Time will show whether her ‘dialogical—criticism’ will establish itself in the field of psalm studies. I am certain, however, that her dialogical, as opposed to a monological, reading opens up new avenues of theological and socio-rhetorical inquiries in psalm studies.