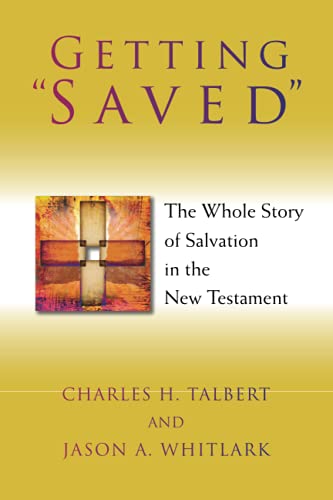 Getting “Saved”: The Whole Story of Salvation in the New Testament

In Getting “Saved”: The Whole Story of Salvation in the New Testament, Charles Talbert and Jason Whitlark have compiled, edited, and themselves contributed to a compelling collection of stand-alone scholarly articles which, though diverse in approach and emphasis, are all centered on the common theme of “divine enablement” in the ongoing process of salvation for new covenant believers. This is accomplished by arranging the book into four themed sections: Pauline Corpus (Part I), Gospels (Part II), Catholic Epistles (Part III), and Revelation (Part IV). In arranging the articles in this manner, the editors have thus avoided presenting the theme of ‘divine enablement’ as a merely Pauline or Synoptic phenomenon; on the contrary, they have successfully been able to demonstrate its centrality throughout the entire NT. Whitlark’s introduction to the book articulates its main concern in the form of a twofold question:

This introductory thesis question brings me to a twofold critique: (1) the general acceptance and adoption of E. P. Sanders’s articulation of covenantal nomism as the paradigmatic pattern of religion of Second Temple Judaism and (2) the subsequent use of his categories “getting in” and “staying in” by the authors here as a framing, comparative tool with which to compare the ethical texts of the NT. This is a questionable methodological and exegetical choice in that it is increasingly being recognized in the field of NT studies, by scholars of various theological proclivities, that the Jewish religion of the Second Temple period is not indicative of a uniform paradigm such as covenantal nomism, but is better and more precisely described in terms of variegated Judaisms.

However, despite this methodological and literary concession to covenantal nomism, since the primary focus of the book is to positively explicate the NT authors’ own understanding of divine enablement as the basis of ethical living and eschatological salvation and not to conduct a detailed comparative study with Judaism itself, even those who would disagree with the supposed normative status afforded to covenantal nomism here will still greatly benefit from the findings of these articles. The results of each article are significant for biblical studies, orthodox theology, and the life of the Church.

Talbert in “Paul, Judaism, and the Revisionists,” notes that Paul perceives any “human faithfulness in relation to God” to be “due to divine empowerment” (p. 34). Each author in Getting “Saved” brings this “divine enablement” theme out of the biblical texts in their own way. Here Talbert focuses on the Pauline metaphor of being “clothed with Christ” by demonstrating that the theme indicates ontological change and elements of divine empowerment (p. 32–33; cf. Talbert, p. 274). Elsewhere Talbert surveys the moral philosophers, such as Seneca and Pythagorus, and argues that the Pastoral Epistles, like the moral philosophers, operate according to a widespread Mediterranean belief that those who looked upon gods, kings, and moral teachers thought that they would be transformed into their image, in a phenomenon which he calls “transformation by vision.” Additionally, Talbert shows in his chapter on the Gospel of Matthew how themes of divine presence can indicate the divine enablement of believers through the use of the phrases and concepts of God being “with you” and baptism and prayer “in the name of” God. His results are highly illuminating and will surely precipitate further interaction with theories of the imitation of a moral exemplar and transformation by vision as means of understanding NT ethics.

Whitlark’s chapter “Enabling χάρις” shows that in the ancient world χάρις operated as part of a reciprocity system of benefaction or patronage in which, as a means of securing the patron’s fidelity to the benefactor, the patron recipient of χάρις (“grace”) felt indebted and thus was faithful to the benefactor on the basis of gratitude. This is in contrast to “divine χάρις” in Ephesians in which grace “is given to the unworthy according to divine election.” Whitlark notes that this electing χάρις is the same grace which “actually enables human fidelity” (p. 35). His work here is valuable in that it alerts the reader to the differences in understanding grace (χάρις) within contemporaneous social and ethical movements, namely, Hellenism and Christianity. I disagree here, however, with Whitlark’s assertion that “faith” in Eph 2:8 is best understood as the “faithfulness of Christ” (p. 48). While there is exegetical warrant for the possibility of such a move in other NT texts, the idea is not derivable from the text of Eph 2 itself.

Another essay by Whitlark argues for divine enablement for covenant faithfulness through the means of the “implanted word” in the Epistle of James where he demonstrates a link between a similar use of divine enablement and the term “implanted” in the Patristic texts of Irenaeus and the Epistle of Barnabas. Similarly, in “Milk to Grow On,” Clifford Barbarick argues that the theme of milk in 1 Pet 2 should be interpreted as referring to the word of God which divinely enables growth in the faith unto eschatological salvation. Here an interesting discussion ensues concerning what exactly “the word” is, if indeed the “milk” stands for “the word” in 1 Peter. Barbarick sees the “milk” as essentially the gospel message or the “imagination shaping story” of the death and resurrection of Jesus and not necessarily limited to the written “Bible” but extending even to the church’s “memory, prayer and worship” (p. 230).

In the remaining essays, the phenomenon of divine enablement as the NT means of progressive sanctification is demonstrated in a variety of ways. Whitlark shows how the themes of a cleansed conscience and the ability to approach God in Hebrews highlights divine enablement in perseverance, and Scott J. Hafemann, approaching 2 Peter through an exegesis which utilizes the ancient Near Eastern covenant formula, demonstrates that the power for virtuous living is in “God’s provisions” and the motivation is in “God’s promises” (p. 261). Michael W. Martin examines the use of an Isaianic divine warrior new exodus motif in Mark 11:1–16:8 and argues for a theology of salvation sola gratia, thus highlighting divine enablement through grace. The centrality of divine enablement through prayer and community is highlighted by Andrew E. Arterbury, which is both exegetically profound and ecclesiologically pertinent.

I highly recommend the entire book as a step in the right direction and a helpful exegetical foundation for current discussions in the evangelical and reformed world and blogosphere concerning the nature and basis of progressive sanctification in a Protestant explication of salvation. The idea that Protestant salvation is nothing more than an external covering with either no attention or a subordinated role given toward inner renewal and transformation is a serious truncation of the gospel sometimes made by Protestants themselves (!) but one that has no basis in the writings of the Reformers or in the pages of Scripture.

One final critique of Getting “Saved” is that due to the employment of the categories of covenantal nomism (i.e., “getting in” and “staying in”) as a paradigm through which to approach NT soteriology and due to the book’s focus on the post-conversion elements of salvation (i.e., “staying in”), the place of initial, forensic declarative justification on the basis of faith alone in the righteousness of Christ alone is not highlighted. By no means am I implying that the authors would deny this, but I am simply pointing out that it is not addressed in the text (however, on p. 3n9, Jason Whitlark mentions another text, Jan G. van der Watt, Salvation in the New Testament: Perspectives on Soteriology [NovTSup 121; Atlanta: SBL, 2005], which he describes as emphasizing “conversion or entrance into the Christian life and community” in the NT documents, in contrast to the post-conversion emphasis inGetting “Saved”). I consider this to be a weakness. One would perhaps expect that with the subtitle The Whole Story of Salvation in the New Testament, the book might seek to incorporate and articulate the past, present, and future aspects of salvation for believers under the new covenant. However, since Getting “Saved” deliberately focuses only on the middle, progressive element of salvation (with a view toward final, eschatological salvation), the book’s title is potentially misleading. More work needs to be done to incorporate the type of work and scholarship achieved by these authors on progressive sanctification through divine enablement with the doctrine of forensic justification by faith alone and the doctrine of glorification. In other words, this question needs to be asked: How does Christ’s work for us in justification relate to Christ’s work for us and in us through divine enablement in sanctification unto glorification? I suggest that we could begin by approaching the entirety of salvation, from first to last, not in terms of Sanders’s problematic paradigm of “getting in” and “staying in”, but from the perspective of and as a result of our “being in” Christ. It is here in the Reformed doctrine of union with Christ that we can grasp the glory and riches of just how it is that one who is declared righteous by the righteousness of another, namely, Christ, becomes like the righteous Christ on the basis of the work of Christ alone and through the divine enablement and agency of God through his Spirit by grace alone. As we seek to rearticulate a fully-orbed reformational doctrine of salvation to our churches, students, and families, we ought to carefully consider the theme of divine enablement and grace-fueled sanctification as argued in Getting “Saved” and seek to situate it with in a biblical theology that clings to our union with the risen Lord for all that salvation is, past, present, and future, to the glory of God.