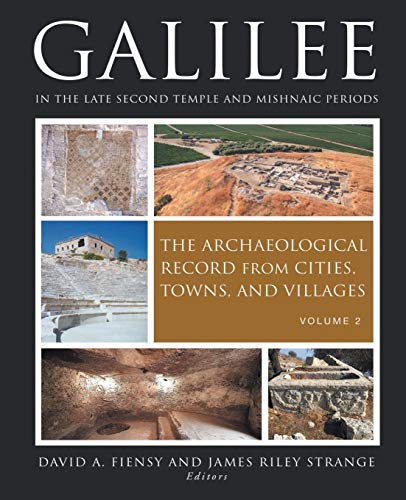 Galilee in the Late Second Temple and Mishnaic Periods. Vol. 2: The Archeological Record from Cities, Towns, and Villages

This is the second book in a two volume project, the first of which (published in 2014) pertains to life, culture, and society. The scope of both is to “consolidate a great deal of information that has been brought to light” in various streams of research (p. 4) in order to make this information accessible to NT scholars. It contains reports on archeological excavations of Galilee at which significant remains from the Second Temple and Mishnaic period have been found (ca. 110 BCE to 220 CE). According to the editors, although there is a renewed interest in the Jewish literature from the time of Jesus, “the material culture of Jewish sites has remained largely unknown” (p. xvii). That void is capably addressed in this significant contribution.

The book begins with an outline of archeological chronology (p. ix) and a timeline of events and rulers in Galilee and Judea in the period under consideration. This is complemented by sixteen pages of excellent color maps and a color photo gallery of important features of select sites. The first essay, by Mordechai Aviam, uses archeological evidence to chronicle the transformation of Galilee as a whole from a largely gentile to a Jewish region. The remainder of the contributions focus on specific sites, or facets thereof. The first city discussed is Sepphoris, which is discussed in four distinct essays that provide an overview of the site (James F. Strange), examination of the residential area on the its western summit (Eric M. Meyers, Carol L. Meyers, and Benjamin D. Gordon), its evolution as evidenced from select archeological features (Zeev Weiss), and its aqueducts (James F. Strange).

The site of Kefar Shikhin (James Riley Strange), though not mentioned in the NT, was apparently an important center for the production and exportation of pottery and lamps in antiquity. Another town, Jotapa (Yodefat; Modechai Aviam) reveals material evidence for a vibrant center of wool and olive oil production. Skeletal remains found at Jotapa reveal the scars of Jewish revolt against Roman rule. Khirbet Qana is one of three sites covered in this volume that could be identified as “Cana of Galilee” from the NT (C. Thomas McCollough). It is this site that bears closer correlation to the literary evidence of Josephus, and provides archeological evidence for occupation from the late Hellenistic period and material evidence (esp. coins) of Jewish inhabitants. The village of Karm er-Ras, located near Kafr Kanna, is claimed by others to be the authentic “Cana of Galilee” (Yardenna Alexandre). This site likewise contains evidence of Jewish occupation in antiquity and was a frequent destination from earliest Christian pilgrims. In the essay on Kafr Kanna itself (F. Massimo Luca), attention is given to the history of pilgrim identification of this as the site for Jesus’s famous water-to-wine miracle.

Nazareth, of course, is an important city for students of the NT (James F. Strange). The essay here surveys its location, natural resources, and references in Jewish and Christian literature and concludes with a brief summary of modern excavations. Kefer Ḥananya is explained as a town from the late Roman period known from literary and archeological attestations for its pottery production (David Adan-Bayewitz). The contribution on Tiberius (Katia Cytryn-Silverman) provides a history of the site from the Roman to Byzantine eras, with a site map and image Roman-period carved inscription of a menorah. The nearby Hamath Tiberius (Carl E. Savage) or “hot springs” of Tiberias, is not mentioned in the NT. However, its synagogue that contains a mosaic pavement featuring the zodiacal ornamentation illustrates the deepening of Hellenization in Late Roman Judaism in Galilee.

Like Nazareth, Capernaum was an important town in the life and ministry of Jesus. The extended article on Capernaum by Sharon Lea Mattila surveys its history and archeology from Hellenistic to Byzantine times. Among the detailed charts, graphs, maps, and reconstructions the authors survey important elements such as its synagogue, houses, olive press, and its development and expansion based on ceramic and numismatic (coin) finds. Bethsaida, which appears both in the NT and the writings of Josephus, is discussed in its first century context with particular attention to imported Rhodian vessels and stamped handles, as well as coins and glass (Rami Arav and Carl E. Savage).

The town of Magdala, also known as Taricheae, has been recently excavated with extensive discoveries relevant to the time of the NT (Stefano De Luca and Anna Lena). The authors survey debates about the identity of the site and detail its excavations with superb site maps. They discuss its pools—which may have been used as a fish pond for fishing industry—as well as its synagogue and the famous stone “table” found therein. Khirbet Wadi Ḥamam is a largely unknown site that was first settled early in the first century BCE (Uzi Leibner). It contains a public building that is most likely a synagogue as well as evidence of violent destruction between 125 and 135 CE, indicating the reaches of the Bar Kochba revolt into Galilee.

Ḥuqoq is a Jewish agricultural settlement northwest of the Sea of Galilee mentioned neither in the NT nor in Second Temple Jewish literature (Matthew J. Grey and Chad S. Spigel). Nevertheless, its three (or four) mikva’ot (ritual baths) evidence a Jewish village in which ritual purity laws were observed during the Roman period. A larger town is Meiron in Upper Galilee (Eric M. Meyers and Carol L. Meyers), which experienced a major demographic shift after the wars with Rome. Excavations of a large tomb and synagogue that could seat over 1000 people illustrate the prosperity of the town.

Gush Ḥalav, also known as Gischala, sits atop a chalk hill north of Mount Meiron (James F. Strange). It is mentioned in Josephus, as the site of a fortification against the Romans during the first revolt. Its ancient synagogue from c. 250–306 CE is discussed alongside a floor plan. The essay on Nabratein (Eric M. Meyers and Carol L. Meyers) focuses on the four synagogues, which date from 135 CE. In Khirbet Shema‘ (Eric M. Meyers) archeologists found the alleged tomb of Rabbi Shammai near a synagogue and, even more surprising, human remains beneath the synagogue. This seems to contradict purity customs. The village of Kadesh in Upper Galilee (Andrea M. Berlin and Sharon C. Herbert) has a long history. Evidence both literary and material indicates it was initially Canaanite before it became an Israelite city of refuge. It featured in Hasmonean era as well as in the Jewish Wars, as a place where the Romans encamped for a time. The authors here display images of seal impressions, coins, and other artefacts from these occupation periods.

This is an excellent book, and well worth the price and effort to read through the minutiae of archeological discussions. Each essay explains something about the location of the site, its significance in history and literature, and some discussion of the history of archeology of the site. Authors ensure that key features of each site are discussed and provide innumerable images, maps, drawings and reconstructions to inform the reader. Furthermore, each essay closes with a thorough bibliography for further inquiry. The book is supplemented by complete indices and—most importantly—a glossary of terms used. For non-specialists, the value of this volume is as much in how it demonstrates archeological methodologies as it is presenting readers with material witness to ancient Galilee.