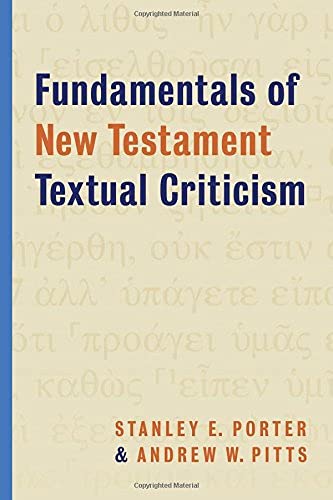 Textual criticism can be an intimidating subject, especially for students. Having learned just enough Greek to use their New Testament, they find a new language that must be learned to use the textual apparatus. Any help navigating these technical and symbol-laden waters is certainly to be welcomed. Regrettably, this book, despite its positive features, needs to be updated before it can be recommended. Below I offer a summary and then list some of the reasons for this judgment.

Situated within a new series by Eerdmans designed to take students from beginning Greek through to exegesis, this book situates itself as a “distinctively midlevel textbook” for first or second year students (p. xiii). Aside from this, its novelty is mainly found in the inclusion of chapters on canon and translation theory. I suspect these additions will give the volume a wider appeal than previous introductions. Each of the thirteen chapters is accompanied by a helpful list of “key terminology” and a short bibliography for further reading. An appendix provides a survey of journals, commentaries, and internet resources for further study. Author and ancient text indices are included but there are no manuscript or subject indices.

The first chapter addresses the increasingly contentious question of the goal of textual criticism arguing for the traditional goal as over against the more recent trend to study variants for their sociohistorical interest (sometimes called “narrative textual criticism”). Their criticisms are valid but their use of the terms “autograph” and “the text’s final form” (pp. 2–3) in defending the traditional goal requires clarification.

The second chapter gives a whistle-stop tour of canon lists, catalogues, councils, and codices on the grounds that “the domain of NT textual criticism must be established before we can undertake the task of NT textual criticism” (p. 9, emphasis original). Unfortunately, there is no reflection on the direct relationship of textual and canonical questions except for their endorsement of the claim that a book rather than its textual form is canonical (p. 29). Given their preference for the “text’s final form” and their proposed relegation of Mark 16:9–20 and John 7:53—8:11 to footnotes (p. 184), such a discussion would have been valuable.

Chapters three and four consider the various types of evidence used for New Testament textual criticism. Here the reader will find brief overviews of the writing styles, materials, and a small selection of important manuscripts, versions, and church fathers. Chapters five and six cover text-types and the definition of a textual variant. It is a surprising but welcome change to see an entire chapter devoted to this latter issue which has special bearing on how one identifies the text-types discussed in the preceding chapter (although the book could do more to bring out this connection).

The heart of the book is encountered in chapters seven through ten which cover the practice of textual criticism. These chapters cover four possible approaches which they group as (1) the stemmatic approach, (2) the Byzantine/Majority Text approach, (3) two types of eclecticism (thoroughgoing and reasoned), and (4) what they call the “single text model.” As this last method involves adopting the text of a single manuscript it risks being a way to avoid textual criticism rather than one way of practicing it. Despite some hints at preferring this particular method (see pp. 6, 101), they do not describe it in any detail. Instead, the remaining methodology chapters focus on reasoned eclecticism covering, with the aid of some thirty examples, the various criteria for judging the originality of readings. The work of Bart Ehrman on the “orthodox corruption of Scripture” is given more space than seems warranted in a book this size (pp. 119–26), but the upshot is a welcome caution against appealing to theological motivation when less interesting causes of variation are at hand.

Chapter eleven gives the student a quick history of “critical editions” (a term undefined) from Erasmus up to the recent SBL Greek New Testament. This sets up the largest chapter of the book which gives a very helpful introduction to the NA27/28 and the UBS4/5. Interestingly, the authors are ambivalent about whether a student should prefer the NA edition over the UBS and they show some preference for the NA27 over the newer NA28 (p. 147n1). It should be noted that the abbreviations and sigla on p. 149 are found in the apparatus of the NA27/28 not the outer margin of the NA. Furthermore, the abbreviation cj represents the Latin conjecit meaning “conjecture” not “infer/infers” and is only relevant to the NA27 since the NA28 dropped all reference to conjectures (pp. 157–58).

The final chapter describes the major English translations along with discussion of translation technique using the now common spectrum of “formal” to “functional.” The authors argue that all translations (in which they include paraphrases) have their value, and they favor of gender inclusive language “where appropriate” (p. 187). A few scattered comments alert the student to the Greek editions behind various English translations but, for the most part, such details are left out.

Overall the book is written with a direct and accessible tone, it is clearly laid out, and the text is unencumbered by footnotes—perhaps to a fault. These are all features that would commend it to beginning students were it not for the number of misstatements, omissions, and factual errors that accumulate by book’s close. In the hope that these might be fixed for a second edition, the following should be mentioned:

There are some problems relating to manuscripts and other materials. The date of the Muratorian Canon is debated, of course, but the authors seem to have reversed the matter in dating the fragment to the second or third century and the list it contains to the seventh or eighth (p. 21). The abbreviations known as nomina sacra are “distinctively Christian” and for that very reason they do not help scholars identify “Jewish or Christian” manuscripts (p. 48). It is not clear what the authors mean when they suggest that “there are accents in many early manuscripts” (p. 162). Likewise, the book hands described by Comfort and Barrett are not “found in varying degrees among . . . later minuscule Greek hands” since, as the title of their book indicates, these styles are all forms of majuscule (p. 46). The “textual character” listed for the manuscripts in chapter four is a bit unclear. Some papyri are categorized by text-type but others by their relation to א/01 and B/03 with no explanation for the difference. Exactly what P22 and C/04 are “eclectic” and “mixed” of is not stated (pp. 59, 60). Codex Washingtonianus (W/032) is described as the earliest witness to the Byzantine text (p. 60), but in light of recent questions about its fifth century date that title is better given to Codex Alexandrinus (A/02) and only in the Gospels. The discussion of Tatian’s Diatessaron (p. 64) could be clarified as it seems to suggest that most of our witnesses to this now lost text are from Syriac translations of an original Syriac text! Likewise, the information on the Philoxenian and Harclean Syriac (pp. 65–66) needs to be updated since they have long been known to be separate translations and since they provide the first Syriac translation of only the small Catholic Letters and Revelation. The suggestion that “text-types” are “geographically based” (p. 73) requires justification as does the entire concept of text-types given the doubts that have been raised about it. At the very least, the student should be made aware of the important current debates. The suggestion that χωρὶ [sic] θεοῦ in Hebrews 2:9 is only attested in “later sources” needs to be revised in light of the evidence of the Vulgate, Ambrose, and Origen. Finally, it is quite opposite of the truth of the matter to say that Mark 16:9–20 and John 7:53—8:11 have “very little manuscript support” (p. 151).

The most significant error relating to manuscripts, however, is the number that is given on p. 50. We are told that there are 128 papyri, 2,911 majuscules, 1,807 minuscules, and 2,381 lectionaries for a total of over 7,000 (a total repeated on pp. 33, 80). But this number is wrong and wildly so. The number of majuscules is overstated by over 2,000 and the number of minuscules is understated by almost 600 (see http://ntvmr.uni-muenster.de/liste). The discrepancy is even stranger given that fact that on p. 48 we are told that there are far more minuscules than majuscules and that the latter only account for about ten percent of the total number of manuscripts. Also problematic is the repetition of now thirty-year-old data from F. F. Bruce comparing the number and date of New Testament manuscripts to those of other ancient literature (p. 50). For example, the reader is informed that there are only eight manuscripts of Herodotus’s famous History with the earliest dating only to 900 AD, but a few minutes on the Leuven Database of Ancient Books (http://www.trismegistos.org/ldab) reveals 43 manuscripts some of which date almost a millennium earlier. Clearly the statistics need updating.

Further problems attend the authors’ understanding of the history of the discipline. The story of a Greek manuscript with the Comma Johanneum (1 John 5:7–8) that was made to order for Erasmus’s third edition (p. 138) is appealing but it remains unsubstantiated (see the work of H. J. de Jonge). It is also incorrect to suggest that Erasmus himself consulted Codex Vaticanus for his first edition (p. 56) when, in fact, he had only minimal access by way of friends and even that was only just prior to the appearance of his third edition in 1522. Likewise, the AV/KJV was not based on any of his editions but on those of Beza and Stephanus (pp. 139, 182). Richard Bentley and not Karl Lachmann is the one who should get credit for being the first to “set out a program to free NT scholarship from the Textus Receptus” (p. 140), and to say that Eberhard Nestle’s important editions “relied heavily” on those of Tischendorf, Westcott and Hort, and Weiss (p. 141) gives the wrong impression since they relied exclusively on them until well after his death. The Editio Critica Maior is mentioned only in passing (pp. 90, 113, 146, etc.) and, strangely, not at all in the chapter on critical editions. The authors seem to think that this edition is still distinct from that of the International Greek New Testament Project (IGNTP) despite that they are now an important cooperative effort (p. 146). Unfortunately, the use of these two editions is never explained and, in keeping with their appreciation of Tischendorf (cf. pp. 56–57), students are pointed to his 8th edition instead.

I hope that listing these problems does not appear to be nitpicking; the reason for doing so is to highlight the problem they present for students being introduced to the topic. For better or worse, textual criticism is a discipline that lives and dies in the details. This makes it especially important that a student’s first introduction gets these right. As it is, teachers looking for a midlevel introduction will have to keep waiting. Were a second edition to address these problems, it could prove itself a valued introduction to the fundamental and fascinating world that is New Testament textual criticism.