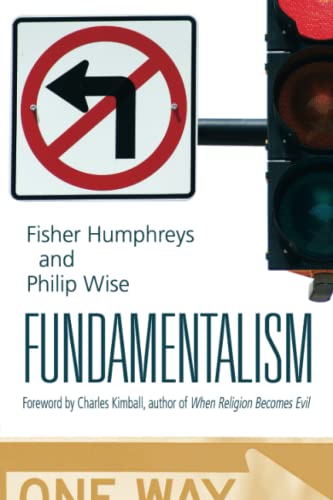 Every author has a perspective. Fisher Humphreys and Philip Wise disclose theirs by dedicating a book on Fundamentalism to the Cooperative Baptist Fellowship and President Jimmy Carter. Not surprisingly, the authors turn out to be Southern Baptists who are unsympathetic toward the conservative leadership. While the book offers some analysis of Fundamentalism, its agenda is to editorialize about Southern Baptist conservatives.

The authors distinguish fundamentalism (minuscule “f”) in general as social phenomena from Fundamentalism (majuscule “F”) as an historic, Christian movement. They open their book with a description of fundamentalisms in general. According to the authors, fundamentalisms are religious movements that selectively employ tradition and react against modernity. Fundamentalists believe that their faith and community are under attack. They demonize their opponents, follow authoritarian males, and idealize the past. They draw careful boundaries to separate insiders from outsiders, and they seek to control their society.

Humphreys and Wise argue that Christian Fundamentalism emerged when American evangelicalism lost its cultural hegemony. They suggest that Fundamentalism began as a reaction against four secularizing phenomena: the Enlightenment, biblical criticism, evolution, and liberal theology. Attempting to organize militant opposition to these trends, Fundamentalists developed a loose coalition in which nobody held authority to draw up a definitive list of fundamentals.

According to Humphreys and Wise, Fundamentalist leadership shifted after the 1920s from scholars like J. Gresham Machen to preachers like Bob Jones and John R. Rice. The movement disappeared from public view, but Fundamentalists were quietly rebuilding its infrastructure. During the 1940s, Fundamentalism gave birth to the less separatistic and more intellectually responsible evangelical movement led by Billy Graham. Finally, in the 1970s Fundamentalism re-emerged as a political power on the Right.

The authors devote just one chapter to the exposition of Fundamentalist theology. They offer a useful summary of The Fundamentals, suggesting that this series offered a defense of only selected fundamental doctrines. Then they turn their attention to the various five-point summaries of fundamental doctrines. Here Humphreys and Wise opine that the doctrine of inerrancy has done more to erode confidence in the Bible than to help it. They also express reservations about treating the substitutionary atonement as a fundamental of the faith. They agree that the virgin birth and bodily resurrection of Jesus are important, as are miracles in general, but argue that an overemphasis on historicity rather than the meaning of these events is misplaced. The authors also pointedly disagree with treating premillennialism as a fundamental doctrine, though they do not cite sources in which Fundamentalists have done this.

Fundamentalist theology is problematic for Humphreys and Wise, but Fundamentalist attitudes are downright frightening. Among these attitudes the authors list suspicion (as a habit of mind), fear (of secularism and education), anger (cultivated as a motivator), and separatism (the rejection of others). In contrast to these attitudes, the authors encourage the spirit of trust, love, and unity.

Just over halfway through the book, Humphreys and Wise turn the discussion toward the Southern Baptist Convention. They note that at one time the SBC rejected Fundamentalism, but they believe that the conservative takeover has brought Fundamentalist values into dominance. This seems to be the real burden of the authors—to connect the Fundamentalist themes and attitudes of the past with the conservative SBC leadership of the present.

How should non-Fundamentalists relate to Fundamentalists? Humphreys and Wise recommend an attitude of kindness and forgiveness, but also one of resistance. They concede that some moderates may have been so badly hurt that they will have to disengage from Fundamentalists. On the whole, however, the authors believe that the Cooperative Baptist Fellowship provides a model for resisting Fundamentalism through argument and especially organization.

Humphreys and Wise do believe that Christianity must affirm fundamentals, but not the ones that Fundamentalists have listed. What do the authors see as fundamental? Their examples include biblical authority but not inerrancy, the incarnation but not the virgin birth, God’s power but not the historicity of miracles, the mutual love of spouses but not the submission of wives to husbands.

What Humphreys and Wise overlook is the fact that Fundamentalists did not invent the notion of fundamentals. Rather, they inherited a centuries-long discussion of essential doctrines and practices. This discussion grew out of the Protestant Reformation and included voices from virtually every branch of evangelical Christianity. The emphasis upon fundamental doctrines antedates the Enlightenment, biblical criticism, evolution, and liberal theology.

To their credit, the authors maintain an even and charitable tone. By focusing upon the social factors and attitudes that supposedly characterize Fundamentalism, however, they produce a study that is decidedly partisan. Their partisanship takes a particularly political twist when they import their observations about Fundamentalism into the Southern Baptist situation.

Humphreys and Wise see as great a threat in Fundamentalist rigidity as they do in liberal flexibility. This bias colors their discussion and leads to a definite rejection of the conservative SBC leadership. Although the authors favor the version of toleration represented by the Cooperative Baptist Fellowship, they do advocate conversation with Fundamentalists. Some Fundamentalists, at least, would welcome that conversation, if only to dispel some of the stereotypes that the authors have perpetuated.