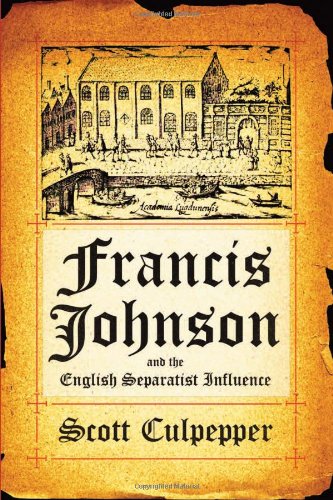 Scott Culpepper’s Francis Johnson and the English Separatist Influence is a welcome addition to the study of English dissenting traditions of the sixteenth and seventeenth centuries. Culpepper, who recently accepted the post of Associate Professor of History at Dordt College (Sioux Center, Iowa), completed the book while teaching at his alma mater, Louisiana College. The biography is an expansion of his dissertation completed in the Religion Department of Baylor University and under the direction of William H. Brackney (now at Acadia Divinity College in Nova Scotia). Culpepper was a part of the short-lived Program in Baptist Studies at Baylor.

Culpepper’s history offers a relatively detailed biography of Francis Johnson (1562–1618), demonstrates the evolution of Johnson’s ideas from the 1580s until his death, and introduces the reader to the separatist movements of the late Elizabethan and early Jacobean eras. Although Culpepper gives considerable attention to Johnson’s connections to John Smyth and early English Baptists and clearly understands the history to be relevant to recent debates in Baptist circles (e.g., pp. 2–3, 257–61) and foundational to future Baptist histories, the focus of Francis Johnson is broad in scope. (In recent years, Mercer University Press has boasted numerous historical studies of Baptists in Britain and America, but Culpepper’s Francis Johnson evinces the press’s interest in histories of other nonconformist Christian movements.)

In short, Culpepper argues that Johnson is a “pleading prophet” who contended for what he believed is truth; that truth “changed” throughout Johnson’s life. The mission of Francis Johnson included his imprisonment in England, his exile from his homeland, his leadership of the “Ancient Church” of London and then Amsterdam, his separation from his brother George, the eventual schism of the Ancient Church, and his late adoption of a more inclusive approach to the Roman Catholic Church. For Culpepper, Johnson and his writings were influential in the formation of separatist leaders like John Smyth and the moderate Henry Jacob, but Johnson was in turn forced to reformulate his own theology when faced with the challenges posed by seventeenth-century “Anabaptists” and Arminians. Thus, Culpepper contends, Johnson’s evolving theology—especially his ecclesiology—was based upon his interpretation of Scripture, but also upon the events of his personal life and the eventual failure of the congregational polity he once espoused to stifle theological error.

After the requisite historiography, Culpepper introduces Johnson briefly in the context of his immediate family and his education at Cambridge. The author paints a likely picture of the young man’s educational environment albeit with few insights into Johnson’s intellectual formation. Culpepper notes that upon Johnson’s achievement of an MA and his ordination, he was appointed a fellow of Christ’s College and was the tutor of the future-Baptist Smyth, who matriculated at Cambridge in 1586. It was in Smyth’s fourth year at university that Johnson publicly voiced his own Puritan theology, particularly that of a twofold order of eldership, which garnered him the ire of the heads of the colleges, imprisonment in 1589, and expulsion from Cambridge in 1590.

Chapter 2 argues that Johnson’s unwillingness to submit to the ecclesiology of the established church prompted him to move to Holland and serve a Puritan congregation. While in Middleburg, Johnson apparently was convinced by his exchanges with separatists to break with the Church of England and adopt a congregational polity. Johnson returned in 1591 to London, where he was elected the pastor of the separatist congregation later to be named the Ancient Church. After being imprisoned from 1593 until 1597, Johnson—after a failed attempt in April 1597 to establish a colony in Canada—joined his congregation that had migrated to the Netherlands to avoid persecution.

Chapters 3–4 explore the division that arose within the church resulting from Johnson’s marriage to Thomasine Boyes and the rift that grew between Francis and his brother George over the proper behavior and apparel of the pastor’s wife, over Francis’s increasing authoritarian leadership, and over his support by and of men like Daniel Studley who were of questionable character. Culpepper demonstrates the difficulties that the exiles faced in the formulation of their theological stance in regards to the English Church and State and the Presbyterianism of their Reformed neighbors, and their difficulty in defining the identity of the congregation and its leadership structure. Internal crises eventually culminated in Francis excommunicating his brother and his father, who had come to Amsterdam to broker peace.

Chapters 5–6 investigate Francis Johnson’s interaction in the early 1600s with the continental Reformed traditions and then with the emerging Baptists. Culpepper reviews exchanges of Johnson and Henry Ainsworth (fellow leader of the Ancient Church) with Puritan, Reformed, and Separatist interlocutors to determine Johnson’s perspectives on ecclesiology during the Jacobean era. Culpepper concludes that Johnson held to a generally Calvinistic theology and was antagonistic to the rise of Arminianism. His continuing endorsement of a separation from the established church, however, distinguished him from other Puritan thinkers, and his growing emphasis on the authority of elders divided the Ancient Church.

The last chapter focuses on the rending of the Ancient Church and Johnson’s A Christian Plea (1617). In this book, Johnson admits the Catholic Church had been a conduit of truth, albeit one besotted by human corruption. This admission was a response to Baptist criticism that Separatists had granted de facto validity to baptisms performed in the Churches of England and Rome.

Although Brackney’s comments in the foreword appear hyperbolic, the book is informative and even entertaining. Culpepper’s retelling of the fraternal acrimony between George and Francis Johnson over the latter’s marriage to the stylish widow, Thomasine, is fair, and it reveals the author’s sense of humor and his eye to the present. Francis Johnson offers introductions and summaries of Johnson’s key theological works and several contemporary treatises. Far from hagiography, the book identifies Johnson as a pragmatist, and Culpepper appears critical of the pastor’s sometimes authoritarian and hypocritical administration of the Ancient Church.

The text should be accessible to undergraduate and seminary audiences and will be useful for its distillation of the English Separatist movements. It offers concise footnotes and a short, useful bibliography. Unfortunately, many readers may be distracted by the numerous stylistic and editing errors that plague the pages, and readers will either be appreciative or annoyed at the extensive block quotations that appear throughout the text.