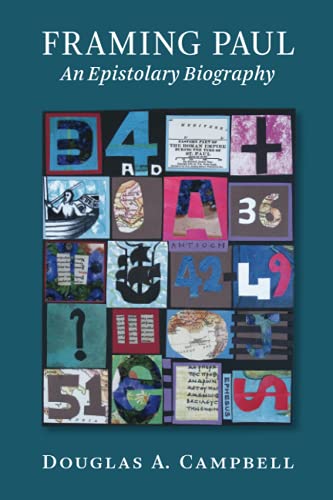 Douglas Campbell, professor of New Testament at Duke Divinity School and author of The Quest for Paul’s Gospel (London: T&T Clark, 2005) and The Deliverance of God (Grand Rapids: Eerdmans, 2013), has produced a significant study of the historical background of Paul’s letters that will be sure to generate considerable scholarly discussion. Rather than providing a comprehensive biography of Paul’s life or an analysis of his theology, Campbell’s central aim is to explore what may be determined regarding the historical circumstances that gave rise to the Pauline letters. For Campbell, such an investigation is hardly trivial. As he contends, “any valid Pauline interpretation in any historical respect must begin with a workable account of the letters’ circumstances in relation to one another (p. 12).” His examination is unique in its attempt to “frame” each of the Pauline writings using evidence gleaned exclusively from the Pauline letters without depending on the relevant narratives recorded in Acts. Campbell’s decision to exclude Acts from his investigation derives from his concern that previous studies have worked from “either an Acts-based chronology that had serious problems or with a muddled approach that switched between Acts-based and epistolary systems (p. xv).”

Campbell’s primary thesis is that ten of the canonical epistles that bear Paul’s name are authentic and that they were written in two particular phases of Paul’s ministry. He concludes that 1–2 Thessalonians were written as early as 40 CE shortly after the “Gaian Crisis” and that the remaining eight epistles were written about a decade later (i.e., between 50–52 CE) in locations around the Aegean Sea and during occasions of significant hardship. By placing the composition of eight of the Pauline letters in the early 50s, Campbell argues for a significantly earlier date of composition than is often assumed for the “Prison Epistles,” while challenging the well-known tradition that they were written during a Roman imprisonment. In addition to the substantial amount of material that is analyzed in support of this general framework, Campbell offers several unique proposals relating to the historical background of the individual writings. The following is a summary of some of the more notable conclusions that relate to the background of the ten Pauline letters he deems authentic.

Although Campbell is to be commended for his insightful examination of the historical context behind each of the Pauline letters, not all readers will find themselves in agreement with each of his conclusions or with various aspects of his method. To mention a few examples, Campbell places great emphasis throughout the volume on the Nebenadressat of each letter, that is, on the identification of those in the immediate vicinity of Paul who would have read or heard his letters prior to their dispatch. This area of study is certainly deserving of greater scholarly attention given its importance in clarifying the identity of the “original” audience of Paul’s writings. However, one wonders if there are occasions in which Campbell places too much weight on certain thematic parallels between various Pauline letters in an effort to identify a writing’s Nebenadressat.

Second, while Campbell’s investigation of evidence from the Pauline epistles is far-reaching and valuable in its own right, some readers may disagree with his decision not to corroborate his conclusions with the historical insights that can be gleaned from Acts. Campbell insists that “only when the epistolary process has run its course … and each item of information has been squeezed dry for every last drop of insight, should interpreters turn and introduce evidence from Acts” (p. 411). It is possible, however, that some of the more tentative conclusions made throughout the volume might be more difficult to maintain when the evidence from Acts is considered. To mention but one example, Campbell concludes that both of the Thessalonian letters were written from Athens. This conclusion is certainly a possibility and there is evidence that some Christians had reached the same conclusion by the fourth century if not earlier (see, for example, the subscriptions found at the end of Codex Alexandrinus and Codex Vaticanus). However, if the testimony of Acts is considered alongside of the information Paul provides in 1 Thessalonians 3 regarding his brief stay in Athens, it seems more likely that Corinth was the place from which the Thessalonian epistles were sent, given Luke’s report that Timothy and Silas were not with Paul in Athens during a significant portion of Paul’s visit (see Acts 17:16 and 18:5).

Finally, while Campbell’s rejection of the authenticity of the Pastoral Epistles is by no means unique in modern scholarship, not all readers will find his arguments against authenticity to be convincing. In his examination of the external evidence, he dismisses the importance and reliability of several early sources that contain clear or possible references to the Pastorals (e.g., 1 Clement, the Muratorian Fragment, and Polycarp’s Epistle to the Philippians) in order to support his conclusion that “only the ten communal letters by Paul are genuine, and that the Pastorals were written precisely to combat Marcion, along with other perceived Christian deviations, in the second century” (p. 390). Several observations relating to the content of the Pastorals are also offered in support of this conclusion. To cite only some of the more notable examples, Campbell observes that it would have been impractical for Zenas and Apollos to travel through Crete (Tit 3:13). Concerns relating to the literary style of Titus are also raised despite his acknowledgement elsewhere that literary style is often an unreliable test for determining the authenticity of New Testament writings. With regard to 1–2 Timothy, Campbell concludes that the similarities in content and language between these letters and the genuine Pauline letters and Acts is consistent with the opinion that the Pastorals were the work of a pseudepigrapher. Perhaps most troubling from Campbell’s perspective is the description of a saying of Jesus as Scripture in 1 Timothy 5:18. This reference, of course, is only problematic if the concept of authoritative Scripture was indeed absent during the final years of Paul’s lifetime.

In sum, while readers will certainly not agree with all of his conclusions, Campbell’s study is the culmination of an extensive and rigorous investigation into the historical context of the Pauline letters that demands serious consideration and promises to spark fruitful scholarly discussion.