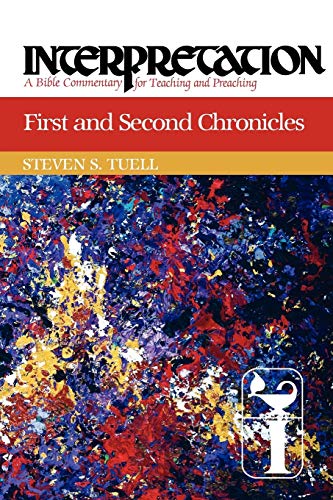 FIRST AND SECOND CHRONICLES. INTERPRETATION. A BIBLE COMMENTARY FOR TEACHING AND PREACHING

Jerome claimed that Chronicles gives us ‘the meaning of the whole sacred history’. Yet it is no secret that this history of the temple and its services is one of the least popular of all the books in the OT. These scholars are therefore to be applauded because they comment it winsomely to the modern reader for use in the church.

Both commentaries are addressed to similar audiences. While Tuell writes for those who teach and preach in the church, Hooker speaks to the educated laity. They both have a similar introduction in which they consider the character of Chronicles, its place in the OT, its origin, sources, historicity, and theology. They lead their readers section by section through the book as they relate the material in it to its sources and its historical context. Both writers hold that Chronicles’ author had access to extra—Biblical sources which are, most likely, much more reliable than its critics have admitted.

Even though Hooker’s commentary is addressed to the laity, it is much more detailed in its analysis of the text and its explanation of difficulties. Thus anyone who wishes to ascertain why the performance of praise was regarded as prophecy in 1 Chronicles 25, or how David erred in taking a census of the land in 1 Chronicles 29, will receive much more help from Hooker than from Tuell, for Tuell does not lead his readers step by step through an exposition of the text. Instead he gives a general summary of its content.

Both commentaries maintain that Chronicles concentrates on right worship at the temple in Jerusalem and on Israel as a liturgical community. Tuell identifies the temple and its liturgy as the main concern of the book. In fact, for Chronicles, God’s presence is to be located in ‘the liturgy conducted in Jerusalem’s shrine’ (74) rather than in the shrine itself. Tuell also emphasises the role of David as the founder of the temple liturgy in Jerusalem. Chronicles, however contradicts this claim, by its repeated reference to Moses as the founder of the sacrificial ritual and its insistence on the need for obedience to the law of Moses in worship. David merely founded the service of praise that accompanied the daily burnt offering.

Like Tuell, Hooker recognises the importance of the liturgy in Chronicles and of David as the liturgist who teaches Israel ‘the songs to sing’ (72). He goes further than Tuell by explaining that the singers were regarded as prophets because they were ‘agents of the divine-human conversation in music’ (103), but at the same time he also overstates his case. He repeatedly claims that David was the founder of lsrael’s faith. Unlike Tuell, he speaks equivocally about the presence of God at the temple. The ark represents God’s potential presence. The temple was not the house of God where the Israelites met with God, but the place where they sent their prayers to God in heaven. This is hard to square with God’s assurance in 2 Chronicles 7:16 that his eyes and heart were located in the temple.

Both these commentaries highlight the liturgical performance of praise in Chronicles. They also however, both fail to show how praise was connected ritually and the theologically with God’s interaction with the Israelites in the sacrificial ritual. That, I hold, is the key to the theology of Chronicles and its use in the liturgy the church.