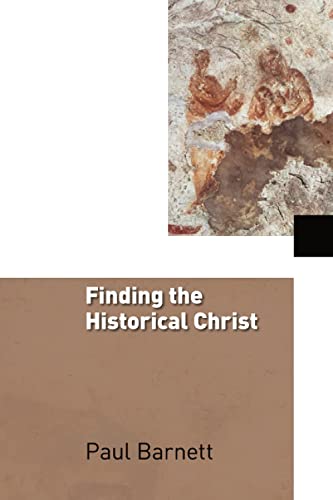 This book is a stout defense of the historical Jesus as the historical Christ, a point indicated clearly by the title. In contrast to many historical Jesus studies where the distance between Jesus and the Christ is portrayed as a gulf that is either difficult to cross or that needs much revision to navigate, Barnett argues that Jesus had a messianic self-consciousness and that the sources of the Gospels give evidence of a careful treatment of history.

The book has ten chapters. Using the creedal statements of the NT as a launching point, Barnett argues that the messianic perspective about Jesus is deeply embedded in the tradition. He also contends that there were four early missions from the church that had a four-fold Gospel that was presented as one Gospel. In this emphasis Barnett follows the work of Martin Hengel. He also surveys non-Christian treatments of Jesus from Josephus, Tacitus, and Pliny. The implications of the testimony from Josephus are not as developed as they could be in terms of the miraculous work of Jesus. He argues for a biographical thread about Jesus emerging from Jerusalem with Peter having a major role as the figure behind Mark’s Gospel. This thread also shows up in Acts. He contends for a model of orality that he calls repeated memory, distinguishing it from the models of Bailey, Dunn, Gerhardsson, and Bultmann. In looking at Luke’s prologue, he argues that the Gospel writers did have biographical concerns about their presentation of Jesus. He offers a strong defense of historicity in John’s Gospel. His survey of Pauline teaching on Jesus focuses on what he learned from Jerusalem, how Jesus’ life is an example to Paul, and how Jesus’ teaching is echoed in Paul. All of this shows that the life of Jesus mattered to the early church. In turning his attention to how the Galilean ministry is presented, Barnett argues that nothing was omitted and that there are key overlapping themes which show Jesus’ kingdom-eschatological hope, his mighty works, and his parabolic teaching. In all of this we see an emphasis that points to Jesus as the Christ, something that becomes focused in Jesus’ last week as he points to his coming vindication to God’s right hand.

This is a fine study. Its key points are mostly well argued. But there are quibbles to be made with the tightness of the case at points. The impression one has of Peter’s centrality to the entire tradition seems overstated. He certainly was a key player, but the role of the apostolic community as a whole seems underemphasized in this emphasis. Certainly the emphasis we see on Peter in Barnett is not mirrored in the reports of the early church. He is but one key player. The extent to which the Gospel of Thomas is Gnostic-dependent is very debated, since it lacks the key cosmological story of that emphasis. This point does not undercut his observation that this gospel is not as relevant to the discussion as some wish to make it, but it does remind us that Thomas is more of a hybrid than some more conservative studies are wanting to acknowledge. Finally, the handling of oral tradition as simply repeated memory seems to underplay the slight variations we get in the reporting of Jesus’ speech (and that of others). To be sure, the gist of the sayings is consistent, but this reviewer was not persuaded that a case for a distinct way of handling orality had been made convincingly.

In sum, this is a serious and well-organized study of the historical Jesus with a case being made at a macro-level and through the remains of the traditions that Jesus had a high messianic self-understanding. Those who see a need for micro-level study of specific key units and details will want to see more, but others (like Martin Hengel and the IBR Jesus Group) have and will supply this level of argument.