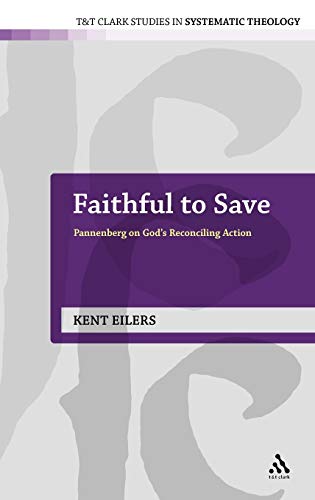 Faithful to Save: Pannenberg on God’s Reconciling Action

Without question, Wolfhart Pannenberg is one of the most creative and powerful theological thinkers of the late twentieth century. Friends and foes alike have acclaimed his Systematic Theology as one of the most, if not the most significant theological offering since the Church Dogmatics, and for those familiar with this work, it is not hard to see why. Pannenberg's theology is a sweeping re-imagination of the whole of Christian theology in light of the eschaton. It is energetic, exciting, and endlessly resourceful. And yet, his thought is often portrayed in the secondary literature as flat, two-dimensional, lacking any nuance, contour, or resiliency. In fact, students who never read a word of Pannenberg but receive his thought only by way of the secondary literature might be hard pressed, on the basis of these descriptions, to discern any distinction whatsoever between him and Hegel.

But with the recent publication of his dissertation, Faithful to Save: Pannenberg on God's Reconciling Action, Kent Eilers aims to show that such portraits are too inattentive to the contours of Pannenberg's thought. Eilers does this by setting forth an account of Pannenberg's mature theology of God's reconciling acts as found in the three volumes of his Systematic Theology, tracing three key themes in four chapters on the anticipation, actualization, proclamation, and completion of reconciliation in history. The three themes Eilers identifies are: the freedom of divine action, history as a function of God's faithfulness to creation, and divine faithfulness as “holding fast” to creation. And while Pannenberg is often understood as more or less dissolving the immanent Trinity into the economic Trinity and thus making God in process with the world, Eilers contends that a close reading of these themes reveals Pannenberg's real interest in grounding all of God's reconciling acts ad extra in the abundance of his life in se.

Eilers recognizes that this caricature of Pannenberg's view often arises from a real concern to do justice to one of Pannenberg's most central themes, the notion that ontology is eschatologically determined. Yet he thinks this unfairly discriminates against Pannenberg's real and often explicit concern to maintain divine freedom. The problem, as Eilers sees it, is that many have misconstrued the relation between the economic and immanent Trinity because they fail to see how this relation, and all divine and human action, is condition by Pannenberg's doctrine of God, who is spiritual, infinite, and eternal.

Humanity, though it asserts its independence in vain, is a creature, and therefore ultimately finite and dependent upon God; its freedom consists only in the movement of the personal history that God gives it from the past to its future. But divine action cannot be conceived of competitively with human action, for in God's transcendence, God embraces the difference between himself as infinite and the human as finite. And because, for Pannenberg, God's eternality consists in the simultaneity of all time, on his account “God is not subject to the march of time as creatures are [and thus God] does not have ahead of him any future that is different from his present” (p. 50).

In other words, the ontologies of God and man stand in a different relation to history and eschatology. Humans are conditioned by history in a way that God is not. History itself is nested in and underwritten by God's infinitude and eternality, and thus while humanity travels through history to a place they have never been and toward an ontology they are waiting to finally receive, God's entrance into human history is always grounded in the fullness of God's immanent life, his infinitude. This grounding implies an irreversibility such that entrance into human history could not introduce a mutation into God's life in se. If this is correct, the economic Trinity would, for Pannenberg, constitute the immanent Trinity in a strictly noetic sense, insofar as the economic Trinity is the basis of our knowledge of the immanent Trinity. God's faithfulness can then be understood as that attribute by which God remains faithful to himself even as he “holds fast” to his creation.

Eilers's argument is clear, insightful, fresh and generous. Critics of Pannenberg may find it too generous and wish for more critical reflection. There is, for instance, no real extended account of the fall, the nature of sin, the relation of fallenness to finiteness, or the bearing that this might have for the final success of Pannenberg's theodicy. But the critical responsibility of a work like this is to clearly parse the intentions of Pannenberg himself, and in this regard, Eilers's book is scrupulously fair. It will not bring criticism of Pannenberg's theology to an end, but hopefully it will put some tired stereotypes to rest, and in this way open the way for a new generation to engage and dialogue with this powerful and nuanced theologian. The book will certainly make its mark in the secondary literature devoted to the interpretation of Pannenberg's work, but it will also supply all kinds of insights to those interested in Trinitarianism, soteriology, anthropology, and the Christian life more generally.