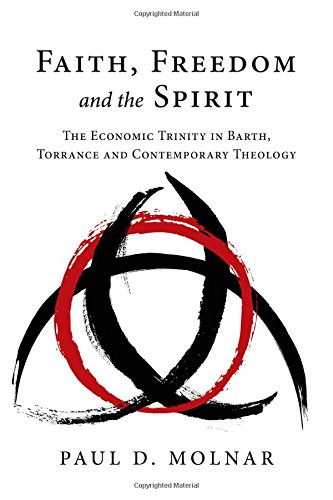 Faith, Freedom and the Spirit: The Economic Trinity in Barth, Torrance and Contemporary Theology

Recent years have seen the rise of a kind of mini-controversy concerning the doctrine of the Trinity. At its finest point, the discussion has circled around differing interpretations of the theology of Karl Barth. On one side of this conversation are figures such as George Hunsinger who argue that Barth stands fundamentally within the broad stream of catholic reflection upon the doctrine of God. While Barth’s understanding of the Trinity bears the marks of his own distinctive appropriation of the tradition in response to Protestant liberalism, these interpreters say his description of the doctrine does not differ fundamentally from the stream of orthodoxy with which he so vigorously and determinedly engaged. On the other side of this conversation are theologians such as Bruce McCormack who argue that in Barth’s later work we see the outworking of his earlier commitments to reworking the doctrine of election such that Barth introduces a radical innovation in his conception of the relation between the immanent and the economic Trinity. In this view, the economic missions do not simply reveal the processions that exist within God’s eternal life; rather, the Father’s decision for humanity in Jesus Christ actually logically precedes his existence as Trinity.

That is the finest point of the conversation. But the underlying issues of this particular discussion are not simply an outlier within contemporary reflection on the doctrine of the Trinity, but are rather symptomatic of deeper uncertainties and discomforts about the relation between the triune God’s inner and economic life, the nature of God’s freedom in relation to humanity, and how reliable knowledge of God is obtained and what characterizes this knowledge. This discussion is one that St. John’s University professor Paul D. Molnar has been involved in throughout his theological career through his earlier work Divine Freedom and the Immanent Trinity (London: Bloomsbury T&T Clark, 2002) and his theological biography of contemporary theologian T. F. Torrance, and he returns once again to this conversation in the recently published Faith, Freedom and the Spirit: The Economic Trinity in Barth, Torrance, and Contemporary Theology (Downers Grove, IL: IVP Academic, 2015).

Molnar intends the volume to be “a discussion of just how a properly conceived pneumatology would assist theologians speaking of the economic Trinity to think more accurately about divine and human interaction in the sphere of faith and knowledge within history” (p. 7). The volume builds to that end, beginning in the first two chapters with a discussion of the nature of knowledge of God. Molnar first examines the place of faith in knowledge of God, arguing not only that true knowledge of God is impossible without faith but that faith is grounded in the Holy Spirit’s work. Molnar has in his sights not only natural theology broadly conceived, but in particular theologies that appeal to and are ultimately grounded upon human experience. Knowledge of God that is grounded upon human experience, such as that found in the theology of Karl Rahner, is a knowledge of God that Molnar says is “possible without any specific reference to God the Father, through God the Son and by means of his Holy Spirit” (p. 80) and is thus less than Christian. The second chapter presses Molnar’s concerns about the knowledge of God further by arguing for a fuller account of the Holy Spirit’s place in mediating knowledge of God by way of the theologies of Barth and Torrance.

In the third chapter Molnar turns from pneumatology and the knowledge of God to the issue of God’s freedom. The aforementioned debate about Barth’s theology takes center stage here, and Molnar provides a neat summary of the various proposals for understanding Barth, the Trinity, and election as given first by Bruce McCormack and later developed in various ways by Benjamin Myers, Kevin Hector, Paul Dafydd Jones and Paul Nimmo. Molnar argues that in each case the decision to reverse the logical order between Trinity and election does fatal damage to the doctrine of God “and in some measure what we then have is a dependent deity; a deity whose very being is constituted, shaped or transformed by created history. But a dependent deity is truly incapable of acting decisively for us in history as the living God actually does” (p. 186). The fourth chapter builds upon this discussion by putting forward Torrance’s particular construal of the relation between time and eternity as an example of a construction of the doctrine of God which properly preserves God’s immanent life and aseity.

The fifth and sixth chapters consider another issue related to Barth’s construction of the relationship between the immanent and economic Trinity—the concept of a “historicized Christology.” Here McCormack, arguing by way of his interpretation of Barth’s later theology, states that the human history of Jesus actually constitutes who God is as the second person of the Trinity. It is not only the case that the human history of Jesus is revelation, but that this revelation is actually constitutive of who God is. Molnar argues that there are a number of errors in McCormack’s argument, not merely in his interpretation of Barth but also in McCormack’s construal of God’s impassibility and the relation between epistemology and ontology. Robert Jenson appears in the discussion as an object of Molnar’s criticism, and once again Torrance is discussed as a figure who properly distinguishes between God’s immanent and economic life. Molnar goes on to rebut McCormack’s interpretation of Barth, arguing that the Swiss theologian did not depart from the classical tradition as radically as McCormack presents.

In chapter seven, Molnar examines the idea of the subordination of Jesus Christ in his economic activity as it relates to God’s immanent life. Molnar has concerns about Barth at this juncture, and Torrance serves as a foil and an example of a theologian who has many of the same commitments as Barth but who avoids Barth’s final positions. Barth argues that the Son’s ad extra subordination to the Father is also in a qualified sense an ad intra reality. While Torrance agrees with Barth that who God “is toward us he is eternally in himself, and what he is eternally in himself he is toward us” (p. 314), Torrance does not speak of the subordination and condescension of the Eternal Son of God in the same way that Barth does. Molnar sides ultimately with Torrance in his refusal to read the Son’s economic condescension into the immanent Trinity in ways Molnar understands to be improper.

oposal is very much preoccupied with modern questions regarding the doctrine of God. A number of interesting questions could be asked of Molnar’s proposals by recent interpretations of the doctrine of God such as Lewis Ayres (Nicea and its Legacy [Oxford: Oxford University Press, 2004]) or Stephen Holmes (The Quest for the Trinity [Downers Grove, IL:  IVP Academic, 2012]). For those who are convinced of the classical tradition’s handling of the doctrine of the Trinity, this kind of engagement would be as informative as that provided by McCormack and Jenson. In what ways are the questions of modern theology a faithful appropriation of the Gospel for our time, or in what ways has modern theology been formed by preoccupations that warp the Gospel witness? Molnar’s argument could be strengthened by this kind of engagement.

Nevertheless, Molnar’s Faith, Freedom and the Spirit provides an excellent summary of the current state of the debate of the doctrine of the Trinity and a compelling proposal for how one might faithfully answer these challenges. It is a volume that seminarians, graduate students, and academics would do well to consider thoughtfully.