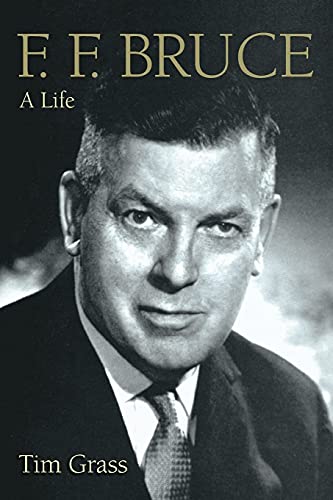 Among the volumes in my library is one of great sentimental value: F. F. Bruce’s 1954 volume on the Acts of the Apostles in the New International Commentary series. Its author (1910–1990) is the subject of this biography. This commentary’s first owner was my grandfather, who—like Bruce—hailed from the east of Scotland. But unlike Bruce, my grandfather never finished school, though after his conversion he became a student of the Bible and subsequently a preacher in a local Brethren Assembly.

It was quite understandable that my grandfather should have acquired the volume. Luke’s Acts was standard fare among the Restorationist-leaning Brethren, and Bruce was in the 1950s, and for some decades thereafter, the brightest light the Brethren movement possessed in the university world. A distinguished graduate of both Aberdeen and Cambridge, he did advanced studies at Vienna. Having begun to lecture in Greek at Edinburgh in 1935, he advanced through posts in Classics at Leeds (1938) and Biblical Studies at Sheffield (1947) before becoming Rylands Professor of Biblical Criticism at Manchester University from 1959 to 1978. It was there that Bruce made his greatest mark as a writer and as a mentor.

Tim Grass, an accomplished writer who earlier furnished us with a modern life of Edward Irving (1792–1834) and a fresh history of the Brethren movement, here provides us with an admirable biography of Bruce. Bruce’s passing in 1990 occurred just long enough ago to gain some perspective on his wider significance and just recently enough for the biographer to draw on the observations of living witnesses on three continents. Earlier, the outline of Bruce’s life could be accessed only through autobiographical musings provided in his Remembrance of Things Past (1980). Now we have a clearer grasp of Bruce’s life and legacy.

First, Bruce the man was but a larger version of the younger Bruce. Son to an itinerant Brethren evangelist, Bruce imbibed godliness at home and good learning at the Elgin Academy. The evangelist’s home, rather than being “philistine” in its atmosphere, was a place of overflowing bookshelves and vigorous discussions. Brethren of northeast Scotland prized independent thought. And so it was quite natural that young Fred, who excelled in the Academy, was admitted to and earned distinction at Aberdeen University. Young Bruce excelled in those studies of the classical world with which Aberdeen had come to be especially associated in the professorship of Sir W. M. Ramsay (1851–1939). Both among the Brethren and in university circles, Bruce learned to be “his own man.”

Second, the young scholar pursued his classical studies with a growing appreciation for the bearing of his discipline on the world of the NT. In the closing decades of the preceding century, the fruits of such an approach had been demonstrated in the career of J. B. Lightfoot (1828–1889) as well as by the Aberdeen professor, Ramsay. Grass indicates that this grounding in classical studies as a basis for the study of the NT gave Bruce affinity with a host of others, of which a notable example was his contemporary William Barclay (1907–1978). Anyone who has made use of Bruce’s 1943 book Are the N.T. Documents Reliable? will recognize the contribution that such an approach can yield.

Third, it is intriguing to follow the broadening of Bruce’s career, coincident with his transition from Leeds to Sheffield in 1947 and from the teaching of Classics to Biblical Studies. It was not the new post that produced the impetus for the different orientation; the latter had been percolating for some time. While at Leeds, Bruce had completed a diploma in Hebrew and as a result was able to teach the exegesis of both testaments at Sheffield, where he became founding professor of the department. In this period, proof of his broadening scholarship was given in his extensive contributions to the New Bible Commentary (1953), his Acts commentaries (Greek text: 1951, NIC: 1954) and writings on Qumran and the Dead Sea Scrolls (1956). This breadth not only opened the door for his being offered the Manchester professorship in 1959, but his eventual presidency of both the prestigious Society for Old Testament Study (1965) and Society for New Testament Study (1975). As Rylands Professor of Biblical Criticism at Manchester, Bruce served as the mentor of some fifty PhD students (chiefly in NT Studies).

Fourth, Bruce the independent thinker, the classical philologist and historian turned biblical scholar, also had his detractors. Was it because of his relative independence of the evangelical Christian constituency, as university professor, that he declined to adopt “shibboleths” about gender and ministry, about eschatology, about Isaianic authorship when expected to do so? Both within his own Brethren constituency and beyond in wider UK conservative evangelicalism, Bruce would regularly dismay some contemporaries who expected him to fall in line with positions more to their liking. Had the setting of the university faculty of theology compromised him? But there was at the same time a wonderful consistency about Bruce, who took his turn in Sunday ministry at his local Brethren Assembly and who traveled widely, speaking to churches and university Christian Unions. At root, the difference was that Bruce—who never took a theological degree—brought only a modest set of theological pre-commitments with him to his biblical studies. He claimed to develop his positions inductively, going only where the evidence led him. Both within UK evangelical church life and in the Tyndale Fellowship for Biblical Research, those with stronger theological pre-commitments demurred over how satisfactory some of Bruce’s views were.

Finally, the biography raises an interesting set of questions about Bruce’s legacy. What is indisputable is that Bruce’s work in Manchester saw the mentoring of many of the preeminent evangelical NT scholars of the last half-century. In that sense, his legacy has lived on across the English-speaking world. As for his vast literary legacy (a list of publications fills 34 pages), the biographer suggests that aside from commentaries, Bruce’s strength lay in articles and lectures later reworked into book chapters that, when consolidated together in volumes, did not always finish with forceful conclusions. Bruce, on this accounting, was more the scholar and researcher than he was the advocate.

One outstanding achievement of this fine biography is that it raises probing questions for a younger generation of evangelical scholars. While reading Grass’s book, I have been mentally comparing it with John D’Elia’s life of Fuller Seminary’s George Eldon Ladd (1911–1982), A Place at the Table (Oxford University Press, 2008). Bruce, working entirely in the British university context, enjoyed the coveted “place at the table” that Ladd and so many of his broadly evangelical peers hankered after. What separated Bruce from Ladd was not their theological views so much as their contexts. Bruce joined university faculties of Biblical Studies and Theology by moving laterally. Having established his reputation first as a classicist, he was then able to demonstrate his wider abilities and was thus able to move easily in circles where his often-conservative views were reckoned acceptable as part of a larger spectrum. Conservative evangelical onlookers have still not resolved the underlying tensions that Bruce’s career trajectory illustrates (though his was not, in fact, such an isolated case). We need the broader resources and forum afforded by research universities, and we desire to be taken seriously in that environment. But more often than not, even when we have gained our credentials in that environment, like G. E. Ladd, we often go on to labor in a “parallel universe” of which the research university takes small notice.

Ladd, the Harvard PhD, was tormented by this lengthy sensation of being the perennial “outsider” looking in. In sharp contrast, in the providence of God, Bruce the independent-minded Brethren scholar enjoyed the advantages of the proverbial “insider.”