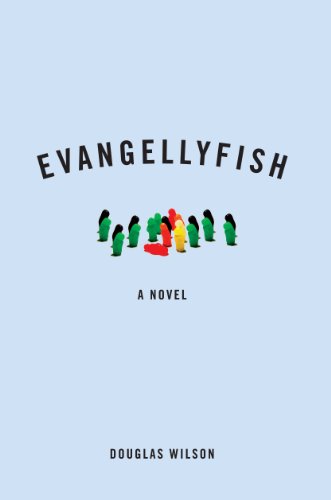 So far this year I’ve read eight books by Douglas Wilson, and reading him usually evokes one of three responses:

Evangellyfish evokes the first two responses but with a few caveats.

The book is unlike any other I’ve read by Wilson: it’s a novel, and it’s satire. Wilson’s other writings have doses of satire, but this is 228 pages of non-stop satire. I don’t want to give away the storyline, so I’ll be vague on those details. Basically, the book is a story of two pastors: (1) a sleazy, sex-crazed mega-church pastor and (2) a faithful, down-to-earth Reformed Baptist pastor with an MDiv from Westminster Theological Seminary. And there are lots of other colorful characters.

On the one hand, this book may not be for you. First, it’s preoccupied with sex. Though it contains nothing explicit, many (most?) scenes are suggestive. Second, it includes realistically coarse language when depicting what crude characters are thinking or saying: e.g., “Who the hell” (p. 21), “what the hell” (p. 99), and “damn” (pp. 24, 35, 111, 156, 179 [2x], 192, 209). Third, Wilson directs his satire almost exclusively at mega-churches in generic evangelicalism. Hardly any of the barbs hit close to home for conservative evangelicals who are robustly confessional. Even worse, the book may instill a prejudice in those readers and tempt them to look down on or be suspicious of all large churches in vanilla evangelicalism as being led by slick hypocrites and filled with superficial attenders.

On the other hand, Evangellyfish may be just what you’re looking for. Like almost everything Wilson writes, it’s witty, funny, and edifying. Especially edifying are the end of the story and how he portrays the Reformed Baptist pastor’s marriage and family. While this novel depicts sin, it doesn’t glorify it; sin is dark and has miserable consequences in this life.

Here are some examples of Wilson’s humorous verve:

Wilson said in one interview, “I want this book to come across to intelligent readers as ‘funny, dark, and redemptive.’” By those criteria, he succeeded.